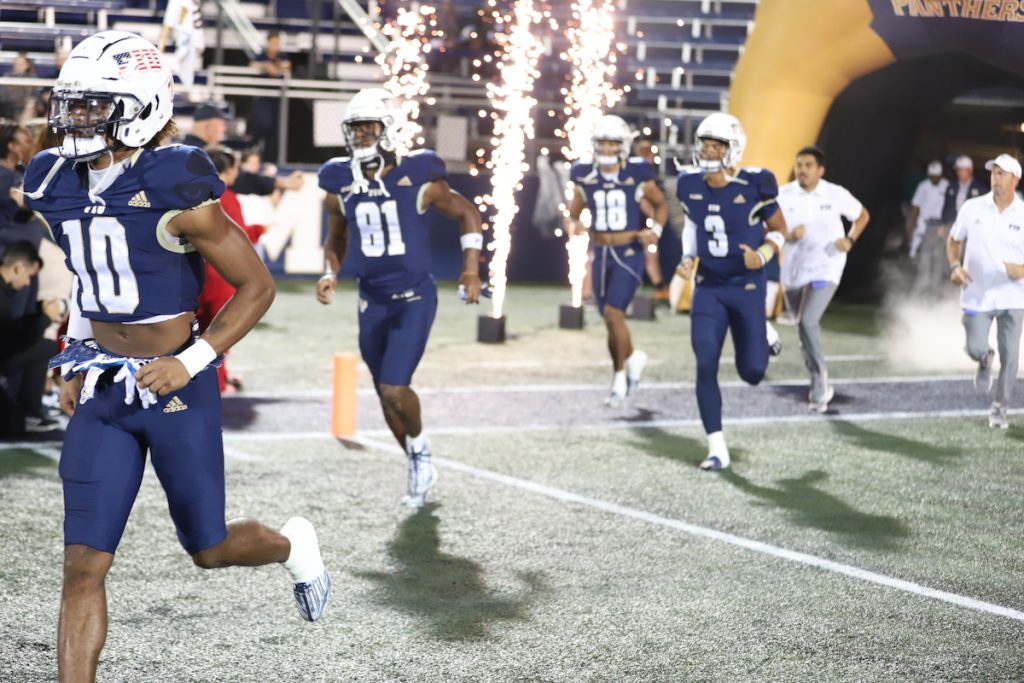 Miami, FL – After an embarrassing 52-7 loss against FAU in the Shula Bowl, FIU looks to rebound and take a win in the lone star state of Texas. The last time FIU took a trip to Texas, FIU suffered a 52-14 loss against the North Texas Mean Green. Bowl eligibility is on the line for FIU. One more loss will end those bowl hopes. However, if they win the final two games of the season, the FIU Panthers will be bowl eligible.

It is fair to say that things did not go as expected for FIU in the 21st edition of the Shula Bowl. Grayson James had arguably his worst game of the season with only nine completed passes, threw for 56 yards, and two interceptions. The FIU run game is the only positive to mention from the Shula Bowl with Flex Joseph rushing for 90 yards and EJ Wilson Jr. rushing for 52 yards. This can only be described as a game where the FIU offense struggled from start to finish and the FAU offense performed to the standard that is expected every year.

UTEP’s offensive leaders are Quarterback Gavin Hardison, Running back Deion Hankins, and wide receiver Tyrin Smith. Defensive leaders include linebacker Tyrice Knight in tackles and cornerback Ilijah Johnson in interceptions. Some storylines entering this game include the status of Gavin Hardison who was injured in UTEP’s loss to Rice State. The backup quarterback for the Miners is Calvin Brownholtz who hasn’t seen much action on the season, but according to head coach Dana Dimel, he feels confident in Borwnholtz.

If starter Gavin Hardison is indeed out for the game this Saturday, the Miner’s offense will take a huge hit. UTEP nets 2,177 yards passing against a net of 1,418 yards rushing. That is a huge significance compared to teams that FIU has played in the past when the pass and the run game were pretty balanced out. UTEP will rely on running backs Deion Hawkins and Ronald Awatt if the Miners look to go into a more run-heavy route. This can be something that can be a hit-or-miss situation for UTEP. It’s due to the lack of yardage that FIU allows on the ground with their up-and-coming defensive line and linebacker core.

Regarding the offense and particularly QB Gavin Hardison, Dimel will not comment on who will be available at quarterback.

Hardison was injured in the 37-30 loss to Rice.

If Brownholtz is in at QB, Dimel feels confident in his abilities at the position. @600espnelpaso pic.twitter.com/rBiIWN4x60

One question asked to coach MacIntyre was in regard to the number of scholarship players that are currently available on a week-to-week basis. MacIntyre first tells the media that “we are down a lot of guys”. Afterward, he shortly explains that during practices they have to do fewer reps and temper practice. MacIntyre also tells the media that this is an opportunity for other players to step up and see an increase in their playing time. The group that has been affected the most by injuries has been the offensive line, which shows why it is extremely young and struggles at times. Coach MacIntyre also was asked about which groups have been hit the most and he mentions the offensive line, secondary, and wide receivers.

Reggie Peterson is a 6’2″, 225 lb linebacker from Fort Pierce, Florida. He is in his sophomore year at FIU. Patterson attended Centennial Highschool and received multiple scholarship offers, but due to a wrist injury he lost them all and ended up in FIU. “I really didn’t have a recruiter here,” said Peterson. He reached out to some coaches and two days before the signing day, FIU’s former coach, Butch Davis agreed to bring on Peterson. Coach MacIntyre was asked about Peterson and mentions that he is “a great leader”, someone who has stepped in, and MacIntyre loves coaching Peterson. “When you see him he puts a smile on your face,” said MacIntyre when talking about Peterson.

Reggie began his tenure at FIU as a walk-on and in less than a year Reggie Peterson now has a scholarship. “Butch Davis did a great job of seeing what he had in me” was some of the first words that Peterson said when asked about his scholarship. Something to note is that Peterson was a sixth-string linebacker in the depth chart. However, he made plays on the punt team and was named a special teams captain in his freshman year. That is something that you don’t see often. Reggie Peterson has indeed stepped up this season for FIU with eight solo tackles, and one interception. He has also played in special teams and on the defense itself making a huge impact for FIU this season.

Working on a cool section for my FIU Preview Article which will be titled “Player Spotlight”. This week it’ll be Linebacker Reggie Peterson on his journey to FIU and much more. @42Pete_ #PawsUp #FIU pic.twitter.com/IFIuIuQcLM

Keys to the Game:

Defense: Force The Run Game, but don’t force it

It may sound extremely weird to say this, but the UTEP run game isn’t as strong as the passing game. This game plan can change if backup quarterback Calvin Brownholtz is the starter. This will force the use of the run game. The FIU secondary will need to step it up because when Brownholtz does indeed pass the ball, you want your CBs in position to shut down the passing game. This will prevent UTEP from finding an offensive rhythm.

After a game where Grayson James completed only nine passes, you need James to come back stronger than ever. He needs to have the type of game he had against LA Tech or Bryant on opening night. James is expected to have all of his targets for Saturday’s game and should be good to go. UTEP’s defense will be one of the weaker defenses that FIU will play in these last couple of weeks, so if there is a game for James to bounce back,  it’ll be this one.