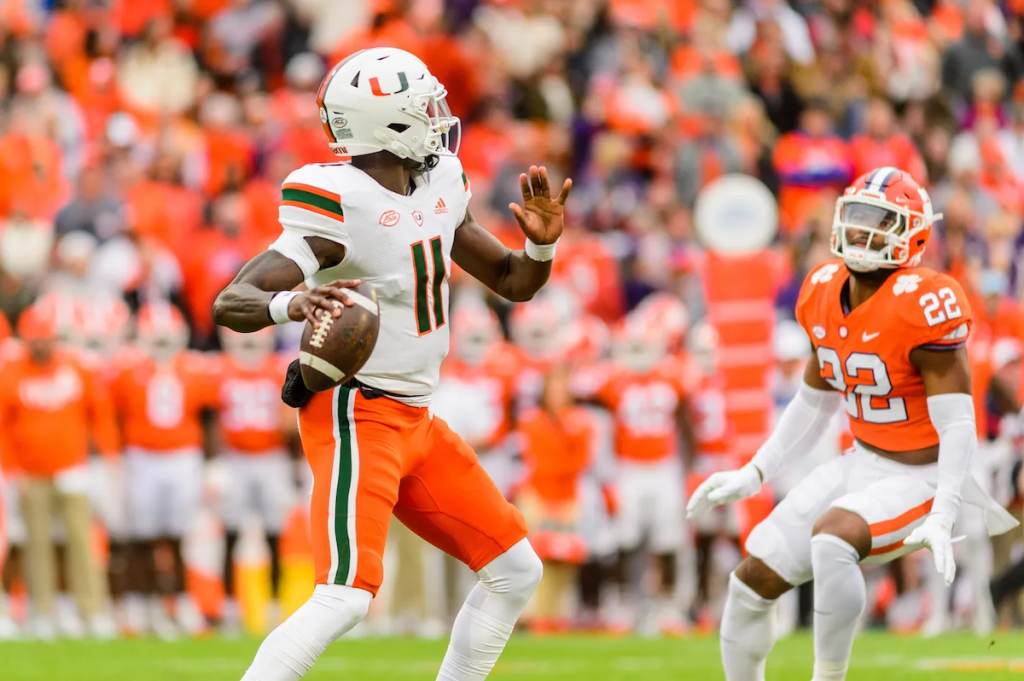 CLEMSON, S.C. – Things went about as expected as the Canes were utterly outclassed by the Clemson Tigers 40-10 at Death Valley. The stat line and the tape revealed yet another atrocious performance by the offense. The Hurricanes were held to just 98 yards total achieving half a dozen first downs all game. Jacurri Brown was named the starter, however, this proved largely irrelevant. Brown completed six of 13 passes for 53 yards and a pick. Conversely, the Tigers made a strong statement in the first half ending the day with 447 yards. DJ Uiagalelei completed 22 of 34 passes for 227 yards, two touchdowns, and an interception. He also rushed for 89 yards scoring once on the ground. Very few thought the Miami Hurricanes had any chance of beating their ACC rivals on the road but their performance regardless leaves a foul taste in fans’ mouths.

This is the fourth time this season the Canes gave up at least 40 points to an opponent. Clemson was already ahead 24-0 at the half and looked ready to really run up the score. The Tigers struggled until late in the fourth quarter giving UM a desperately needed lifeline. Andres Borregales erased the shutout with a 44-yard field goal. After Miami surrendered a safety, Jake Garcia managed a one-yard TD toss to Kahlil Brantley to make it 26-10. The U advanced no further. The Tigers dominated the time of possession (38:15) forcing three turnovers in the win.

The Tigers scored on the opening drive of the game. Uiagalelei slung it to Davis Allen besting DJ Ivey in the endzone making it 7-0. The bad tackling, a key theme in multiple seasons, continued. Late in the first quarter, Uiagalelei took it himself on a second and goal slipping past three Miami defenders. In another abysmal example, with 2:52 remaining in the half, Clemson’s signal caller faced a four-man rush on 3rd and 6, squeezing up the middle for 16 yards, faking out Tyrique Stevenson and Keontra Smith. In the second quarter, DJ found a wide-open Luke Price for his first catch of the year, a three-yard TD pass.

you absolutely love to see it. pic.twitter.com/z9XrPNSz2F

Once the second half began, the Tigers played surprisingly badly.  B.T. Potter missed a 59-yard FG with the next four drives ending in an interception, two straight fumbles, and a three-and-out. Ivey was credited with the pick, recovering the first fumble forced by Kamren Kinchens. The second was all Akheem Mesidor, recovered by Jordan Miller. Credit where it’s due. The offense didn’t exploit the opening. Clemson dashed any remote hope with just over five minutes left in the game. Uiagalelei connected with Jake Briningstool for 49 yards (Smith was caught off-guard) setting up Will Shipley for the three-yard rushing TD. Shipley was mostly contained until that moment. Cue the fat lady because that’s a wrap.

If anyone was wondering, it’s pretty certain Josh Gattis will not be returning next year. Miami’s offensive coordinator has overseen mediocrity and worse this season. It’s tough to fathom his retention. The Canes were 3-for-11 on third down accumulating 68 passing yards and 30 rushing yards. The QB was sacked five times. There were also six penalties (including two personal fouls) costing the team 58 yards.

should probably block this man

There were nice moments for the team, especially on defense but it’s just moral victorious in an ugly defeat. Lastly, the loss pushed the Hurricanes to 5-6 (3-4, ACC) where they will need to win in the season finale back home versus Pittsburgh to nab a bowl game. Call it no heart. Call it no effort. It’s plain no fun at The U right now. The Canes falling to Clemson at Death Valley is the latest example.