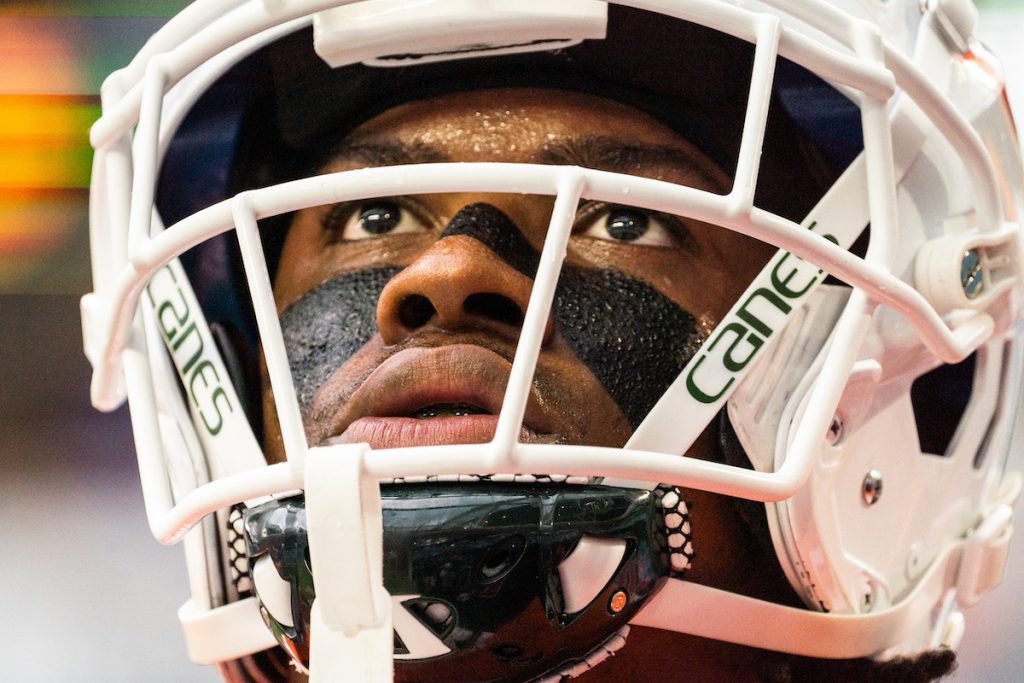 Miami, Florida – Week 12 brings the toughest team the Miami Hurricanes will face this year: The Clemson Tigers. Ranked No. 9 they reign atop the conference. Perched high in the Atlantic Division at 9-1 (7-0, ACC) the Tigers’ lone blemish is the 35-14 loss at Notre Dame. They’re coming off a 31-16 victory versus Louisville kicking off a four-game homestand to end the season. Brimming with playmakers on both sides of the ball, the Tigers are some of the best in the country against the rush. And they don’t give up a lot of points either.

Allowing 111.6 yards a game, Miami’s running backs will be in for quite the challenge even with a familiar face potentially returning. Despite being as good as UM against the pass, they only give up 21 points a game. That is bad news for The U.

Starting on the offense, we got quarterback DJ Uiagalelei who’s been a beast at his position. He’s supported by a pretty talented runner in Will Shipley.

Fast and athletic, the defense has lead tackler Trenton Simpson and also Barrett Carter. The former missed the last game due to injury with the latter wreaking havoc on the Cardinals. This team is stacked but not invincible. With that said, the last time the Miami Hurricanes played the Clemson Tigers they lost 42-17 back on October 10, 2020.

DJ Uiagalelei (QB) – Completing 19 of 27 passes for 185 yards and a touchdown versus Louisville, Uiagalelei also produced 32-yards on the ground complemented by a rushing TD. These numbers may not look great to some but this signal caller is not to be taken lightly. He has thrown for a whopping 2,179 yards including 19 passing touchdowns. DJ has committed only five interceptions. Quite the ratio for the junior out of Inland Empire, California.

Will Shipley (RB) – The Tigers’ offense is further augmented by this explosive playmaker. The sophomore is sitting on 899 yards with 12 TDs. That’s good enough for second-best in the ACC. Will Shipley represents the most daunting task for the Miami Hurricanes. Until the season finale versus Pitt that is. UM’s front will have to step up big to contain the run game. If the defense is up to the task the Hurricanes might be competitive.

put this on repeat. then put it on repeat again.

Will Shipley is 𝐝𝐢𝐟𝐟𝐞𝐫𝐞𝐧𝐭. pic.twitter.com/SVJW15eDW8

Trenton Simpson (LB) – The linebacker went down with an ankle injury but this lead tackler is highly athletic and a threat to the offense if available. He has the speed and physicality to get past opposing players closing in on the ball carrier. Simpson leads the team with 57 tackles in addition to three passes broken up and one forced fumble. He is part of a unit that is very agile and more than capable of piling on the pressure. A versatile individual, Simpson has the range to play in various spots on the defensive side of the ball.

Barrett Carter (LB) – Filling in for the injured Simpson, Barrett Carter wreaked some havoc on the Cardinals. Carter tallied eight tackles, two sacks, and 3.5 tackles for loss. His performance earned him ACC Linebacker of the Week. He made a key interception in the fourth quarter denying Louisville the chance to cut into Clemson’s 14-point lead. The emerging sophomore has 49 tackles, four sacks, two forced fumbles, and two interceptions for 2022. Barrett will certainly make his presence known this Saturday.

Quarterback – The position shrouded in mystery. Who will start? Coach Mario Cristobal remains noncommittal on whether it will be Jacurri Brown or Tyler Van Dyke. For a big game like this, if TVD is close to 100% I’d rather give him the ball (Sorry Jake). Brown played well last week against Georgia Tech but deference towards experience may be best. If Van Dyke starts, the hope is it’s not a repeat of FSU.

In his first career start, Jacurri Brown was responsible for 3 touchdowns in the 35-14 win!@CanesFootball pic.twitter.com/8s84GCr0GK

Frank Ladson Jr, (WR) – It’s not very often you see a transfer play against his former team. The ex-Clemson wideout has experienced a fairly quiet season recording 27 receptions for 298 yards and a touchdown. Frank Ladson’s best game of the year was arguably the 27-24 loss to UNC. Ladson nabbed a season-high eight passes for 59 yards. His lone TD was at Virginia Tech. The junior is tied for third in receptions with Colbie Young and fourth in receiving yards.

Great protection, great job by TVD scanning the field. Find Frank Ladson Jr. for the touchdown
Best opening drive of the year for the Canes pic.twitter.com/pmefyVox9B

Don Chaney Jr, (RB) – Chances are good a familiar face will return this weekend against the Tigers. According to coach Cristobal, Don Chaney Jr. has been medically cleared to play. It’s all about shaking off the rust during practice which he’s been doing. His 2021 campaign was cut short due to a knee injury. The fullback has yet to play a single game this season. In 2020, Chaney rushed for 322 yards generating three scores.

Kamren Kinchens (S) – Woah there! Kamren Kinchens went off on the Yellow Jackets doubling his season totals with not one, not two but three interceptions. One of those was an impressive 99-yard pick-six. Kinchens was a highlight reel last weekend. Accumulating 39 tackles, 21 of them solo, with three pass breakups and six INTs the Canes would love a repeat performance at “Death Valley”. No doubt I see the safety as one of the keys to the game.

Congratulations to Kamren Kinchens on being named the @ACCFootball Defensive Back of the Week after his 8 tackles (4 solo tackles) and 3 interceptions (including a 99-yard interception return for a touchdown) performance in the ‘Canes win at Georgia Tech! pic.twitter.com/bvu4brXxNf

Prior to the 2022 season, I marked this one down as an L. Fast forwarding to now, nothing has made me think otherwise. The Miami Hurricanes do not have enough talent to beat the Clemson Tigers, especially at their house. It won’t even be close. UM will go down 38-21.