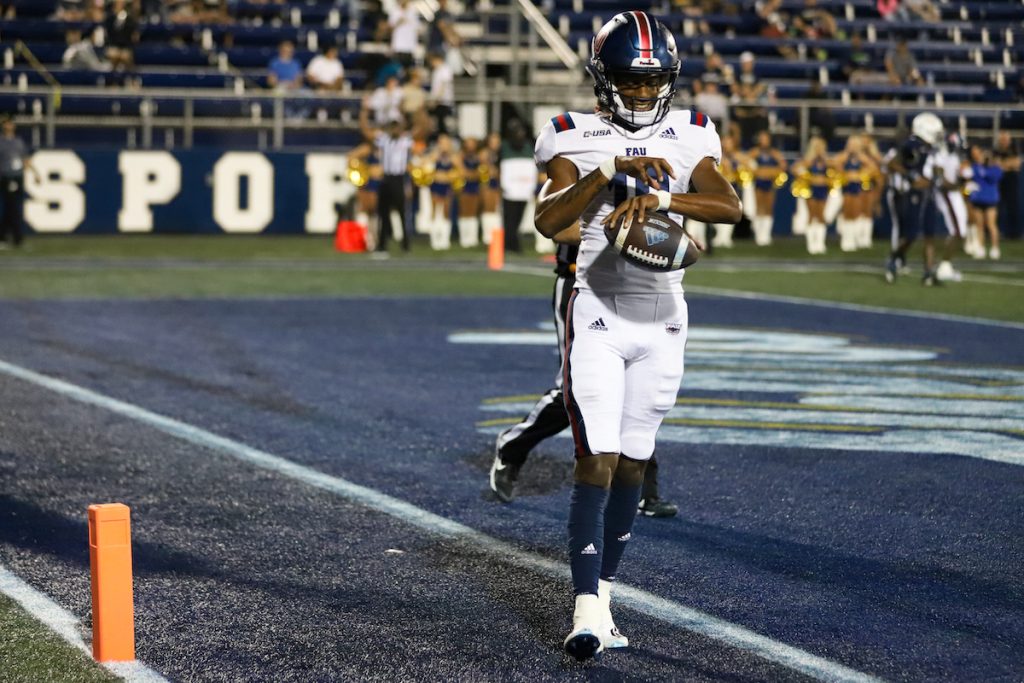 Miami, FL – In a pivotal matchup that could have helped the FIU Panthers earn a bowl-game appearance for the first time in three years, FIU dropped the ball against their rival FAU Owls, falling by a dominant score of 52-7.

With the first play of the day for FIU being an interception, FAU took the lead early and never looked back.

The first pass of the day for Grayson James is intercepted inside the 10-yard line by FAU. N'Kosi Perry punches it in for the first touchdown of the day.

Their running game and man coverage could do no wrong

“Yeah, we’re just not very good. They played better than us,” said FIU head coach Mike MacIntyre. “We’ll try to find a way through it, but we’re not doing a very good job.”

A Lot at Stake for FIU

The 21st game of the Shula Bowl had a lot of extra meaning for the Panthers. With a 4-5 record with three games left to play, FIU needs to win at least two more games to be considered for bowl game eligibility.

In what has been an up-and-down season, FIU has broken consecutive losing streaks on the road and against FBS opponents dating back to 2019.

– 21st edition of the Shula Bowl

Despite some harrowing wins against Bryant and Louisiana Tech, the Panthers have also been blown out by teams such as Western Kentucky, UConn, and most recently, North Texas.

In a rare instance, FIU faced an FAU opponent with the same record as them. After a three-game losing streak in the middle of the year, the Owls have won two of their last three against Rice and UAB.

A Rivalry 20 Years in the Making

This is the 21st meeting between both FIU and FAU in an uninterrupted series that began in 2002. Both colleges are 55 miles apart- about an hour away on the Turnpike.

When both teams moved into the Sun Belt Conference in 2005, and then Conference USA in 2013, they never missed a matchup.

The rivalry in football is known as the Shula Bowl. It’s named after the late head coach of the Miami Dolphins, Don Shula. The original head coaches for both teams had connections to Shula, either as an assistant coach (Howard Schnellenberger) or as a quarterback. (Don Strock)

FAU has been dominant in the rivalry, winning 15 of the 20 meetings. This includes a 58-21 win in Boca Raton last season. FIU is on a five-game losing streak, with their last win in the series coming in 2016.

FIU dug themselves into a hole less than a minute into the game when the first pass of the day for quarterback Grayson James was intercepted by FAU linebacker Jaylen Wester.

Already inside the 10-yard line, FAU quarterback N’Kosi Perry rushed into the end zone for an immediate Owls touchdown.

After a quick three-and-out from FIU’s offense, FAU drove down the field again. While the FIU defense forced a fourth down, the Owls converted an 11-yard pass to extend the drive into the red zone.

After a five-yard catch from wide receiver Je’Quan Burton, FAU extended their lead to 14-0 seven minutes in.

Things didn’t get better for FIU on their next offensive possession, who struggled to get past the line of scrimmage. After another punt, the Owls were able to reach the red zone once more, as their running attack led by Perry carried them to their third touchdown, as the first quarter ended with a dominant 21-0 lead for FAU.

No Answers on Defense

The Panthers offense couldn’t create any rhythm, being forced to punt on their third straight drive. FAU was the opposite, with all the tempo needed to march right down to FIU’s side of the field.

While the FIU defense made their first stop of the game, Owls kicker Morgan Suarez sank a 31-yard field goal to extend the lead to 24-0.

The offense of the Panthers finally came to life on the ensuing drive. After a pair of first downs, an 11-yard pass to wide receiver Artez Hooker set up a 28-yard touchdown run by James, scoring their first and only touchdown with 10 minutes to go in the second quarter.

While the game up to this point had been fast-paced thanks to FAU’s running attack, it began to slow down as both teams exchanged punts. With four minutes to go, a quick two-minute drive for the Owls ended with a four-yard score by running back Johnny Ford, raising the lead to 31-7 right before halftime.

The Hole Gets Deeper for FIU

Both teams began the second half on a whimper, with a pair of turnovers on fourth down only killing the game clock. However, the Owls would be the team to adjust on offense, scoring two straight touchdowns.

All the while, FIU’s offense regressed from their sole touchdown in the game, committing more turnovers on failed fourth-down attempts.

The fourth quarter went by quickly, with a single touchdown scored by the Owls. A 12-yard rushing touchdown by FAU backup quarterback Willie Taggart Jr. sealed a 52-7 score to end the game.

The Statistical Breakdown & What’s Next

For the Owls, Perry only threw for 104 yards off of 14 completed catches, and there were only two touchdowns scored through the air. FAU’s offense was bolstered by their running game, which produced 281 yards and five scores.

FIU’s quarterback Grayson James only recorded 56 yards passing off of nine completed catches from 26 attempts, and also ran for FIU’s only touchdown of the day. No receiver for the Panthers produced more than 30 yards.

“We’re just not hitting on any cylinders on offense and defense for the last two weeks. It’s been deplorable,” said MacIntyre. “We’ll keep working on it and try to find a way to run better.”

The one bright spot for FIU’s offense might be running back Lexington Joseph, who rushed for 87 yards.

Team-wise, the Owls offense earned 385 yards and held the ball for over 30 minutes. They achieved 26 first downs, committed no turnovers, and were only flagged six times.

The loss drops FIU’s record to 4-6. With only two games left for the Panthers, they would have to win out in order to be eligible for a bowl game appearance.