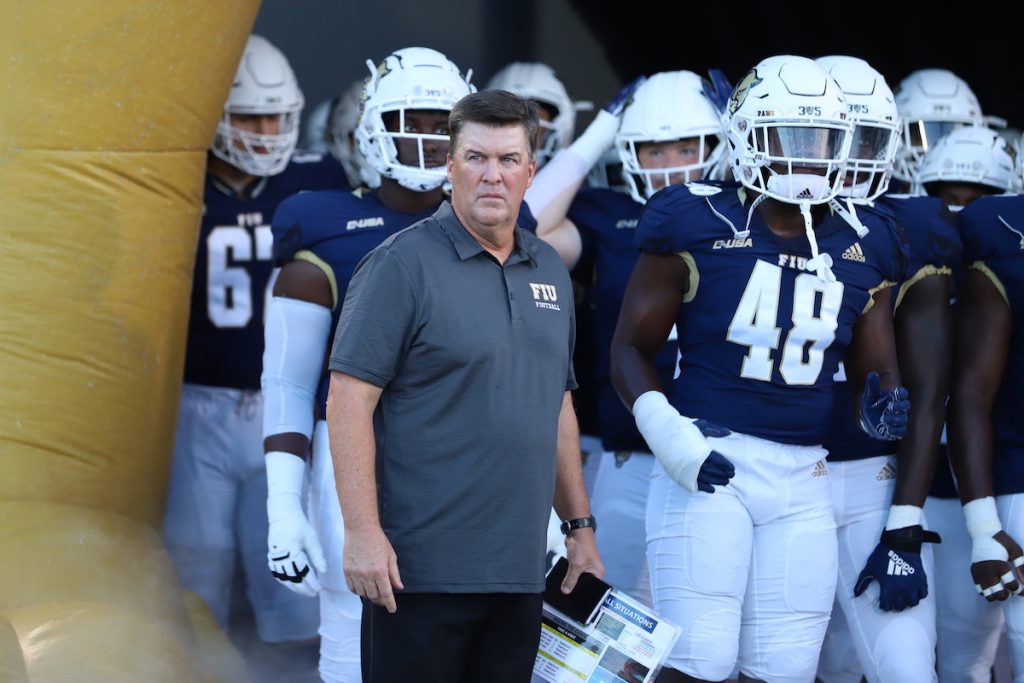 Miami, FL – You smell that? This season, there’s an unfamiliar scent in the cool crisp air at the Cage tonight. Haven’t smelled it in a long time. Smells like, I think, yeah it’s … expectations! Year one of the Mike MacIntyre era at FIU got underway with a dramatic walk-off, two-point conversion winner over Bryant University Bulldogs in overtime. The Panthers looked sluggish and honestly plain bad for the first three-quarters of the game before coming alive late for a 38-37 win to kick off the 2022 season. Grayson James came on in relief of the injured starter Gunnar Holmberg and racked up 207 passing yards with 3 fourth-quarter touchdown passes and a 4th in overtime. Tyrese Chambers and Kris Mitchell each had a pair of TD receptions for the Panthers who were trailing 16-0 in the second quarter.

How did we get here?

The Panthers come into 2022 having won just one game since the program hit its peak with the win vs. the University of Miami at Marlins Park back in November 2019. Since then, it’s been the lowest of lows. The Panthers lost the next game and the bowl game right after to close out 2019. Then went 0-5 during the shortened Covid season of 2020. They beat Long Island University to open up the 2021 season and then proceeded to lose every game after, finishing that season 1-11. That makes it 1-18 since that faithful day at Marlins Park. They’ve now matched their win total from the last two seasons combined.

There was so much riding on tonight’s win. The Panthers will be on the road for the next month. Trips to Texas State, Western Kentucky and New Mexico State before returning home on October 8th to take on UCONN. If they come back from the road trip at 1-3, they’ll have lost all the equity they built with the fans after tonight’s win. A 2-2 record might be acceptable but can also be very misleading. Are they two good wins? Were they two bad losses? 2-2 leaves too many questions. The goal needs to be 3-1 at worst to keep building on the momentum and validate those expectations we smelled at the start.

The Panthers had a three-way battle for quarterback during training camp. Graduate transfer Gunnar Holmberg beat out sophomore Grayson James and redshirt freshman Haden Carlson. Gunnar comes to FIU from Duke where he threw for 2,519 yards, 7 TDs and 10 INTs over 18 games with 11 starts. Grayson James came in with only 162 career passing yards with 1 TD prior to tonight. Grayson entered the game in the third after Gunnar left with an injury following a targeting call on Bryant. It didn’t take long for the sophomore to settle in and get the stagnant offense going. We’ll know more about the status and availability of Gunnar in the coming days. He did finish the game 14-20 with 103 yards and a touchdown pass right before the first half ended.

Tyrese Chambers nabs his first TD of 2022 cutting into Bryant’s deficit. FIU is down a field goal 16-13 with just over 12 mins to go pic.twitter.com/34jTJK8yJH

Luck Be a Lady Tonight …

First games are never a fair barometer of what to expect for the rest of the season. On paper, FIU was a 10-point favorite over Bryant. You couldn’t tell that during the first three quarters while the Bulldogs were just having their way with us. Marching up and down the field without any real pressure. While we were struggling to get the ball past midfield, the Bulldogs were constantly driving on our defense. So much so that at times throughout the game, I questioned who exactly was the FCS school.

Sometimes in sports, you just need to be lucky. The Panthers definitely had lady luck on their side all night. It just felt like when the Panthers needed a break or a crucial stop, something would happen. It came in many forms. Tipped passes, dropped passes, blocked PAT, goal-line stop, forced fumble, strip sack with a fumble recovery and even the phantom ghost tackle to stop a touchdown return before the half that would’ve surely put the game out of reach. I swear, these ALL happened.

The defense is absolutely keeping this team in the game. Early fourth quarter and the offense is driving. Still down 16-6. #PawsUp #PantherPridepic.twitter.com/zRbybkDNou

Over 4,000 students attended the opener and those who stuck around till the end were treated to something incredible. Late in the fourth, after FIU took a  27-23 lead with 4:08 left in the game, Bryant then proceeded to go on a 10-play, 75 yard touchdown drive to take the lead, 30-27. FIU was able to answer back with a game-tying field goal as time expired in the fourth. There was a targetting call on a fourth down pass that kept the drive alive. Once again, very lucky.

Bryant scored on the very first play of overtime with a beautiful 25-yard touchdown pass from Zevi Eckhaus to Anthony Frederick. Now it was up to FIU to answer. Grayson James answer the call with his 4th TD pass of the game, a 5-yard pass to Tyrese Chambers. Now came the gutsiest and just straight-up ballsiest call of the game. Do you go for the tie and kick the extra point? Or, do you go for two and the win?

“We didn’t stop them two drives in a row and in overtime,” MacIntyre said.  “Coach Yost said he had the perfect play, and we had not stopped them, so I said let’s do it.  Sure enough, he did have the perfect play.”

The new Panther Head Coach did not waste any time making the decision to go for the win. That takes guts. I like a coach that has the guts to put it all on the line like that, and I’m sure the players loved it too. The overtime victory capped a comeback from an early 16-0 deficit and is the Panthers’ largest comeback victory since rallying from 17-0 down at Old Dominion on Sept. 8, 2018.