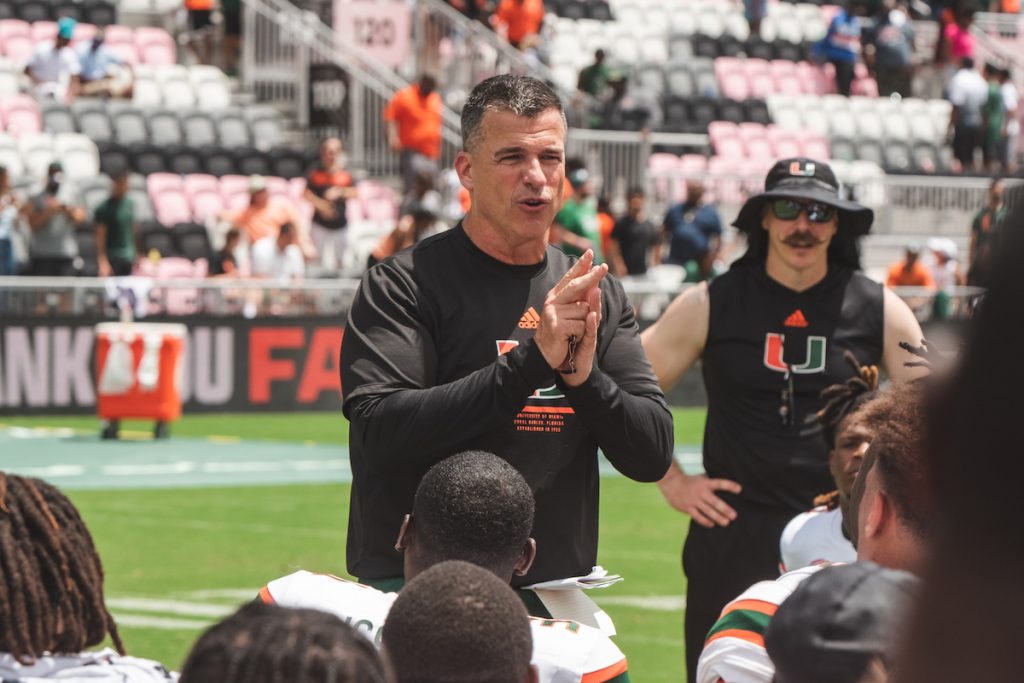 Miami, Florida – It’s time for some 2022 Miami Hurricanes football, the Mario Cristobal era has begun ladies and gentlemen. We return to the time of year when both school and tailgating are back in session. Coach Cristobal has hit the ground running since his arrival to Coral Gables and it’s safe to say the hype is real. Now that the 2022 season is upon us, we’re going to see if the team is too. For years fans have had high expectations only to experience equally high disappointment. Based on what’s been seen, heard, and written about the wait may be finally over.

However, the games still need to be played. And won. Cristobal and company have to prove themselves when the time comes and show they are the real deal. The schedule will give plenty of opportunities (more on that later) making this at the very least a potentially exciting season for The U. For the first time in quite a while the Canes are rocking a very formidable squad on both sides of the ball. Let’s see what the faithful are working with.

Time to dial in. There’s work to do. pic.twitter.com/hJ5pwIWRkQ

Now, this is where my eyes will be. UM’s defense was flat-out bad last year allowing over 28 points a game. The Canes only had eight interceptions in all of 2021(6 from the secondary) with James Williams the only guy with multiple INTs (2). Then there was the tackling or lack thereof. For 2022, the defense will be overseen by Kevin Steele and co-defensive coordinator Charlie Strong.

Beginning in the trenches, we’re going to see an improved defensive line where the starters will be rotated around. Depth and versatility will be their strength as they wear down opposing offenses, inducing significantly more interceptions than what we saw last year. Akheem Mesidor, Jacob Lichtenstein, Darrell Jackson, and Mitchell Agude are some names to remember.

When it comes to the linebackers we’ve got experience in the form of UCLA transfer Caleb Johnson. There’s also Waynmon Steed and Corey Flagg bringing hard-earned knowledge to succeed. They’re going to need it because what they have in know-how they don’t in athleticism. This will be put to the test when the boys face high-tier running backs. If the veterans struggle guys like Wesley Bissainthe and Chase Smith are going to get looks.

Switching to the secondary this unit also enjoys depth and versatility in what can be described as a Swiss army knife to counter all kinds of opponents. Say you need big guys for corners, you got Tyrique Stevenson and DJ Ivey for example. For man-to-man coverage UM can call on Daryl Porter and Te’Cory Couch. Let’s not forget James Williams, Kamren Kinchens, Avantae Williams, and veteran Al Blades Jr. these fellas are going to make an impact too. Cristobal has been very happy with Al’s transition to safety. He IS the Swiss army knife able to play anywhere. Defense wins championships, after all.

It’s the Tyler Van Dyke show and if you think last season’s performance was good the fans might be in for something special. TVD threw for 2,931 yards including 25 touchdowns and only got picked off six times. He was averaging 293 yards per game. Van Dyke is the reason Miami is No. 16 in the AP preseason Top 25 rankings. Since depth is important at any position, Jake Garcia makes a good backup for a worst-case scenario.

With @Tyler_Van_Dyke under center, the sky's the limit for The U! 🙌

Heading back into the trenches the offensive line has the advantage of both athleticism and experience. If they can stay healthy by the time Zion Nelson returns the O-Line will be even better. I am interested to see if Jalen Rivers, Jakai Clark, John Campbell, and the others can coalesce into a great core that keeps TVD upright. They also gotta open the lanes for the running game to really take off.

The running back corps is now thin. TreVonte’ Citizen and Don Chaney Jr. are out due to injury. The task now falls to Jaylan Knighton, Henry Parrish, and Thad Franklin. Rooster can really take it to a whole new level aiding in a truly balanced attack on offense. The keyword there is consistency. Otherwise, Parrish gets the bulk of the carries.

Flying over to the wide receivers, I hate to say it but fans should brace themselves. Dropped passes remain an issue. Cristobal already alluded to this after the second scrimmage. How will The U do against quality secondaries? Key’Shawn Smith, Xavier Restrepo, Frank Ladson, Michael Redding III and even tight end Will Mallory need to step up. Without playmaking athleticism, their speed won’t mean anything. Miami can alter the air attack to include two TEs with Elijah Arroyo. Overall, the offense should be great under offensive coordinator Josh Gattis.

Mario Cristobal running back depth now that TreVonte’ Citizen and Don Chaney Jr. are out with injuries. pic.twitter.com/j1GculZVw4

The kicking game I feel good about. You got Lou Hedley who’s been a bright spot at punter and then there’s kicker Andres Borregales, Jose Borregales’ younger brother. When it comes to the kick return the Hurricanes will have both Restrepo and Brashard Smith’s speed. The pair can also do punt returns alongside Jacolby George.

There are four matchups I’ll be looking at closely. The Hurricanes’ first true test will be on September 17th at Texas A&M. Facing the Aggies on the road will give fans a good idea of where the team is at early in the season. The other three battles will be in November starting with the November 5th homecoming game versus Florida State. Need I say more? It’s the Seminoles man. The last two games of the season will decide UM’s fate within the ACC Coastal playing at Clemson on November 19th and the home finale versus Pittsburgh on November 26th.

So the big question is…what would a successful first year of the Cristobal era look like? For me it’s a 9 or 10-wins, clinching the ACC Coastal, and finally winning a bowl game. This also happens to be my prediction, at least most of it. As things stand right now I’m leaning towards the Miami Hurricanes achieving a 10-win season, and capturing the Coastal. UM is the favorite to secure the division. The team cannot play down to the competition. Regardless, it’s going to be one heck of a year for the Canes.

Mario Cristobal said the Hurricanes have moved on to Week 1 prep. pic.twitter.com/cT4wUsa9k8