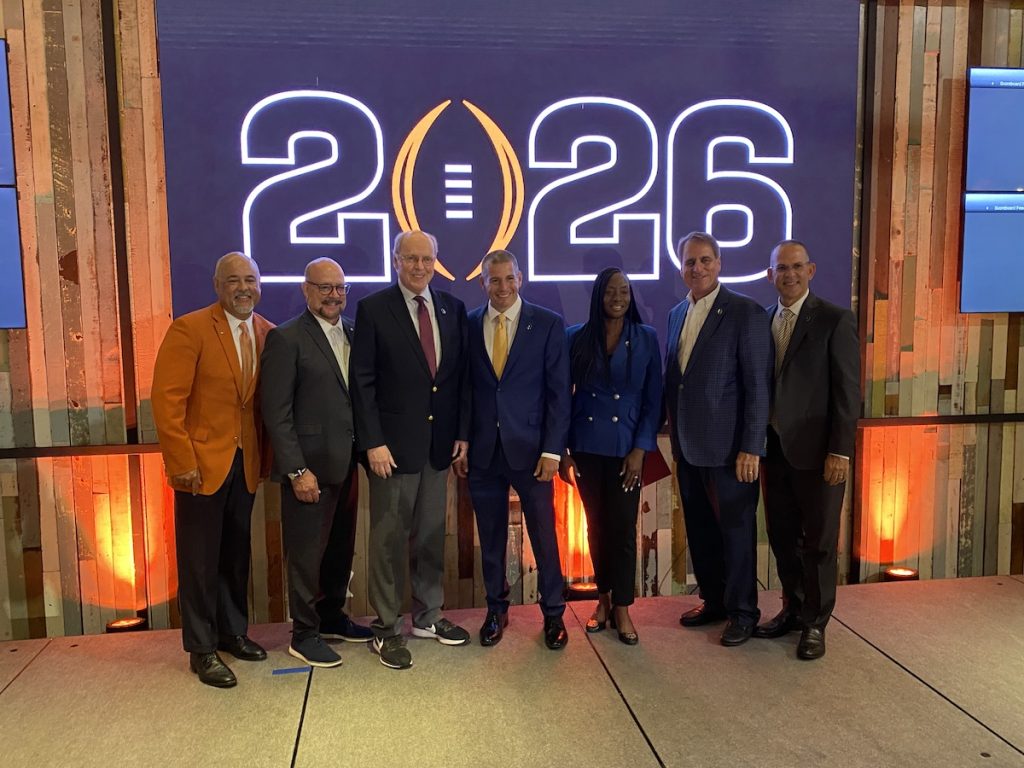 This will be the 22nd college football national championship hosted in South Florida, and the second since the CFP era began in 2014. Miami hosted the 2021 CFP National Championship between Alabama and Ohio State, though attendance was limited due to the adverse impact of the pandemic. The first 20 South Florida national championship games were hosted by the Orange Bowl Committee, most recently the 2013 BCS National Championship between Alabama and Notre Dame.

The Orange Bowl Committee led the community-wide bid effort to host the 2026 game along with the region’s counties, municipalities, tourism bureaus, chambers of commerce, local universities, and others.

“We are truly honored that the College Football Playoff would select Miami as the site of the 2026 CFP National Championship,” said Jack Seiler, chair of the 2026 Host Committee. “Our region is a premier destination for major sporting events, and we are excited to have South Florida shine in the national spotlight once again. Following our successful hosting of the 2021 CFP National Championship through the unprecedented challenges presented by COVID-19, we immediately became focused on the next viable opportunity to once again bring college football’s most prestigious event back to our community with a complete championship experience and a capacity crowd at the spectacular Hard Rock Stadium.”

“We are elated to be able to bring the CFP National Championship back to our community in 2026,” said Frank Gonzalez, president & chair of the Orange Bowl Committee. “While this was truly a collaborative effort of many entities, we felt that it was important for the Orange Bowl Committee to once again lend our many years of experience and expertise in leading this collective championship bid effort.”

"As the organization that hosted the first 20 National Championships in South Florida… we felt that it was important for the Orange Bowl Committee to once again take the lead in bringing this stellar event back to South Florida and Hard Rock Stadium in 2026." – Frank Gonzalez pic.twitter.com/pHeINo47Ug

“Steve Ross privately invested hundreds of millions of dollars to make Hard Rock Stadium a premier venue for the world’s biggest events and bringing another college football National Championship here to South Florida is a testament to that vision and commitment,” said Tom Garfinkel, vice-chairman & CEO of the Miami Dolphins and Hard Rock Stadium. “We look forward to working with the Miami Host Committee and the CFP to deliver a world-class event for the teams, fans, and partners.”

“We are delighted to be returning to Miami,” said Bill Hancock, executive director of the College Football Playoff. “South Florida was a great host for the 2021 national championship game despite the event being scaled back because of COVID-19, and we look forward to returning in 2026 with a full complement of events and activities during National Championship weekend. The first-class stadium, convention center, hotels, and supportive people in South Florida made the decision to return quite easy. The CFP National Championship has become one of the most popular sporting events in the United States in a short period of time, and we look forward to a terrific celebration in Miami in 2026.”

“From our history of hosting some of College Football’s greatest moments to our beautiful beaches, our rich and diverse culture, and our top-rated restaurants, Miami-Dade is a perfect destination for football fans,” said Miami-Dade Mayor Daniella Levine Cava. “We will be proud to once again showcase all we have to offer to the student-athletes, coaches, fans, and all those who join us here in January of 2026.”

The 2026 CFP National Championship will be the 12th under the College Football Playoff which began with the 2015 game in Arlington, Texas. The 2023 game will be played in Los Angeles and in Houston in 2024.