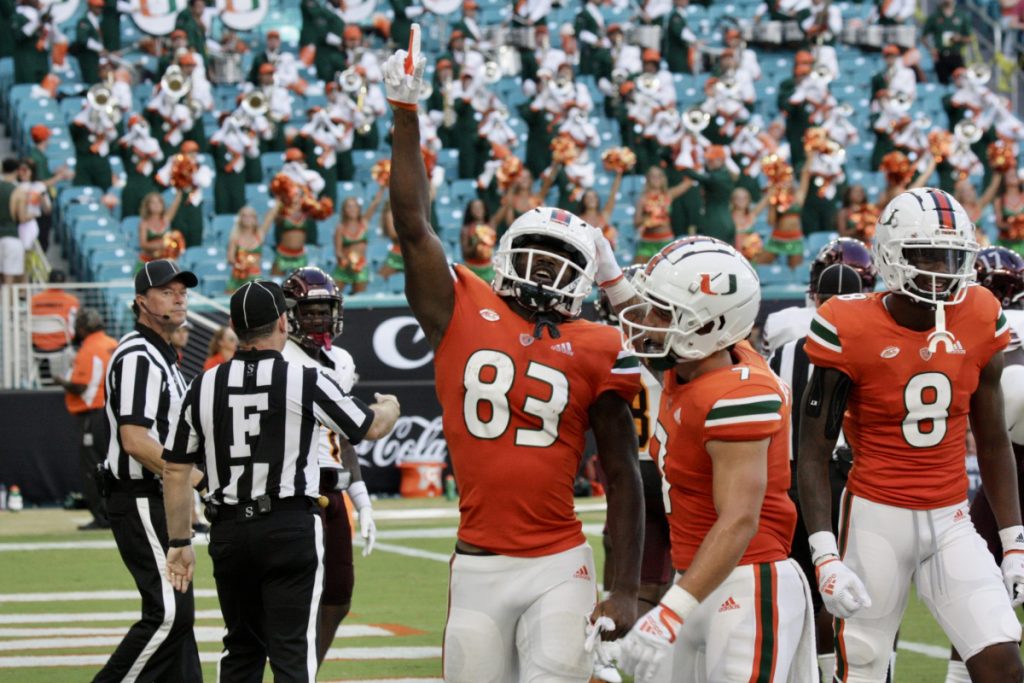 Miami, FL – The Miami Hurricanes opened the 2022 season by demolishing Bethune-Cookman 70-13 utilizing a balanced attack in the air and on the ground. Tyler Van Dyke completed 13 of 16 passes for 193 yards and a pair of touchdowns. The ground game saw Henry Parrish Jr. and Thaddius Franklin Jr. lead the way getting the bulk of the carries. Parrish Jr. rushed 14 times for 108 yards and three TDs while Franklin Jr. recorded nine carries for 78 yards and two scores of his own.

The first TD of the Cristobal Era pic.twitter.com/Vyfom5flbX

UM generated 582 yards (277 passing, 305 rushing) and was a perfect seven-for-seven on third down. The Hurricanes were also 9-for-10 in the red zone. Miami scored in almost all of its drives (nine of 10) for a near-perfect performance offensively. TVD’s sole blemish was a fumble in the third quarter. On the defensive side, the unit forced three takeaways, all of them interceptions. The defenders managed five tackles for loss, three pass breakups, and two sacks.

Things started off rocky on Bethune-Cookman’s opening drive. The Wildcats suffered three penalties making it 3rd and 23. However, the Wildcats’ quarterback Jalon Jones completed a 24-yard pass to Marcus Riley for the first down. BC marched up the field settling for the 29-yard field goal to open the scoring.

Key’Shawn Smith gave Miami excellent field position with the 70-yard kick return setting up the eventual 4-yard rushing touchdown by Thad Franklin Jr. Bethune-Cookman’s second drive ended prematurely when Jones’ pass intended for Riley was intercepted by Kamren Kinchens. UM added to its advantage when Parrish Jr. rushed for the 5-yard score. Parrish struck again with the six-yard rushing TD giving The U a 21-3 lead. The boys kept pouring it on this time on defense. Linebacker Gilbert Frierson picked off Wildcats QB Tyrone Franklin taking it himself for the 32-yard reception making it 28-3 Canes.

The Wildcats did scratch a TD before halftime. Jalon Jones found runningback QueShaun Byrd for the 34-yard strike cutting a bit into Miami’s lead. UM responded accordingly with a touchdown of their own. Van Dyke connected with Xavier Restrepo for six more points.
The Canes never took their foot off the gas scoring at least two TDs every quarter.

The Hurricanes played to expectations and frankly took care of business as they should have. There were several explosive plays including the 70-yard kick-off return by Smith and the 52-yard pass connection to Restrepo back in the second quarter. The team recorded a touchdown in nearly every possession except one. On defense, it was generally good. Mostly. We saw decisive playmaking when Frierson completed the pick-six but there were two instances that made me shake my head.

Keontra Smith was caught sleeping allowing Byrd to get behind him, catching Jones’ pass for the 32-yard score. The other play was Tyrique Stevenson getting burned by Marcus Riley in the third quarter for the 44-yard completion. Not to nitpick but this won’t fly against Texas A&M in Week 3. The edge coverage needs to improve.

Outside of that, the D largely did its job with the three INTs. As a reminder, the team only had eight picks all year last season. In the post-game presser coach Cristobal stated that the team’s goal of being 1-0 by 7:15 tonight was achieved. He went on to give a frank assessment of the program’s performance touching on various topics.

“There’s a lot of bright spots. Certainly things showed up in a positive way in terms of physicality and conditioning and execution, particularly in the offensive side of the ball.” pic.twitter.com/gBXADwzGON

Cristobal went on to say the tackling was up and down. On the flip side, there were no dropped passes. Restrepo credited the offense’s success on the game planning from the coaching staff. The O-line was great against the pass rush keeping Van Dyke upright too. Speaking of, Parrish thanked the line for their support in the run game creating lanes for the fellas to run wild. An unsurprising good start to the season. Onwards to the next opponent.