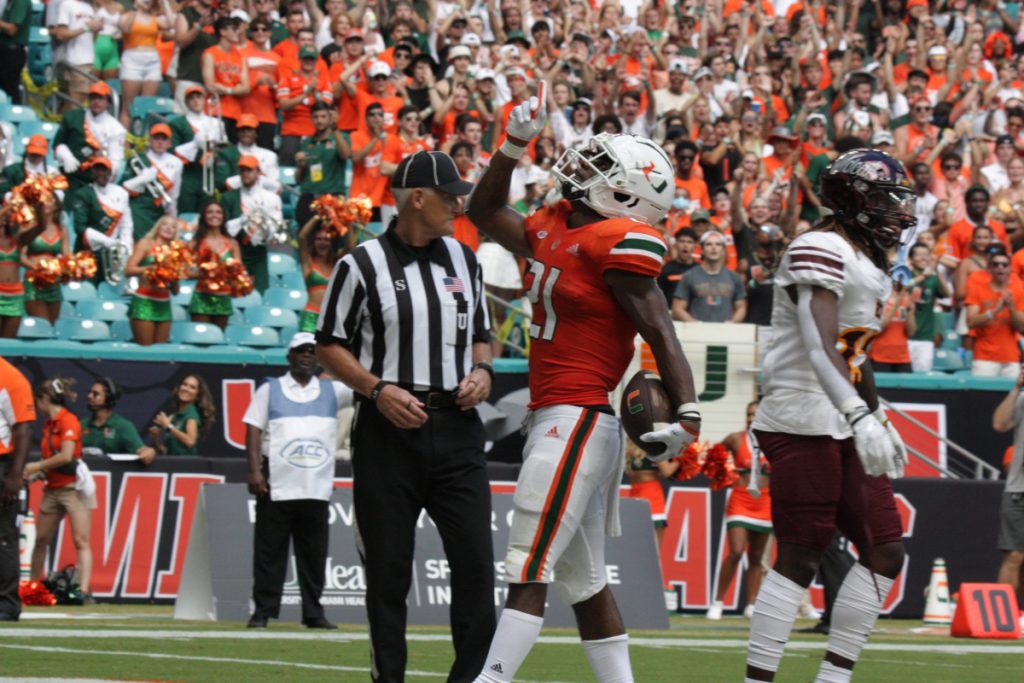 Miami, Florida – With Bethune-Cookman in the rearview mirror, the Miami Hurricanes now focus on opponent number two: Southern Miss. The Golden Eagles suffered a heartbreaker, losing their home opener to Liberty 29-27 in a thrilling 4-OT battle. The main threat to the Hurricanes is the son of  UM legend Frank Gore Sr. Although Frank Gore Jr. is hands down the best player on USM they have other assets at their disposal.

They got a promising redshirt freshman in Ty Keyes who was knocked out in the second quarter versus Liberty who if healthy can make good plays. The Golden Eagles’ number one wide receiver Jason Brownlee is back after a very productive 2021 season. On the other side of the ball, defensive back Malik Shorts will be on the prowl. He led the team in tackles last weekend and recorded an interception. Southern Miss is a transfer from C-USA conducting its first season in the Sunbelt Conference. Miami opened the week as the 26.5-point favorite in what’s pretty much seen as another tune-up before their road game against Texas A&M.

Anchoring the ground game, Frank Gore saw an increase in his workload after Keyes’ early exit. He recorded 32 carries for 178 yards scoring twice. Last season Gore rushed for 801 yards including 5 TDs averaging 66.8 yards per game. The Hurricanes held the Wildcats to just 93 yards in week one but this is a far higher tier of quality they’ll be facing. Considering the man’s pedigree the defense will be busy this Saturday, the linebackers in particular.

It’s back & it works. @stn_2lit to the 🏠 on the direct snap. ☀️🏈pic.twitter.com/baDdbYrt1Y

The Golden Eagles abandoned the passing game early so Brownlee had a very quiet start to the season recording one catch for 35 yards. However, if Keyes is able to return the wide receiver gets an opportunity to display his capabilities against Miami’s secondary. In 2021, he led the team with 46 catches accumulating 643 yards including hitting the centennial mark twice on the road against Rice and Middle Tennessee. Brownlee has achieved this five times during his college career.

Shorts is part of a Southern Miss defense that held its own last season. Heading into 2022 the D is seen as a strength. Malik recorded 12 tackles versus Liberty complementing his performance with an INT, the fifth of his college career. He stayed above 80 tackles for 2020 and 2021 and looks set to pass the mark again this year.

Assuming he can play after taking a late hit to the chin, the redshirt freshman will further enhance an offense containing both Gore and Brownlee. In five appearances so far, Keyes has racked up 444 yards including three touchdowns and three interceptions. If he does get the green light, his assignment will be a very tough one at the Hardrock.

With five catches Xavier Restrepo hit the centennial mark versus the Wildcats nabbing his first TD of 2022. Restrepo was top dog in the receiving corps and should continue in week two. It’s early but the third-year sophomore has emerged as Tyler Van Dyke’s favorite target. Keep in mind fellow wideout Jacolby George remains suspended until week three. The opposing secondary is a step above Bethune-Cookman’s, particularly with Shorts and company hunting for those INTs. Xavier looks poised to accumulate a lot of yards in Josh Gattis’ offense.

Special teams was a huge A+ in the home opener largely from Key’Shawn Smith’s contributions. Smith racked up 184 yards on just three kick returns consistently giving the offense significantly better field position. No doubt the Golden Eagles will be cautious when they kick it to him this Saturday. Who knows, maybe he’ll take it to the house in week two.

Key'Shawn Smith's 72-yard kick return is the @AutoNation Call of the Game from @CanesFootball's season-opening win on Saturday. 🙌#GoCanes pic.twitter.com/VwV8fgMJOy

Rooster was unable to start due to a soft tissue injury allowing Henry Parrish Jr. to run wild versus Bethune-Cookman to the tune of 14 carries for 108 yards and a trio of touchdowns. Parrish has played every bit as advertised. If for whatever reason, injury or otherwise, Jaylan Knighton is unable to get it done, the Ole Miss transfer will surely be up to the task. With a healthy Knighton, this dynamic duo can really put a hurt on the opposition and we are likely to see it this Saturday when Knighton is cleared to play.

After getting burned a bit during week one, Tyrique Stevenson has a chance to improve and up his game versus the Golden Eagles. Bad reads made him anything but a dominant defensive back last weekend. However, opportunities might be scarce if Ty Keyes doesn’t start. Whether or not Southern Miss fully commits to the run game, Stevenson still has to tackle like the rest of them and contest any throw that comes his way.

Tough sequence for Miami secondary. Tyrique Stevenson gets beat on a 45-yard gain down to the Miami 12. It was a perfectly placed ball to Kahlil Overton. On the next play, Kam Kinchens gets to a PBU a little too early and gets called for PI. 3rd and goal at the UM 4.

Similar to the first game, it won’t be as big of a blowout but the result will be the same. UM will have no trouble taking down Southern Miss, winning comfortably. Final Score: 49-10.