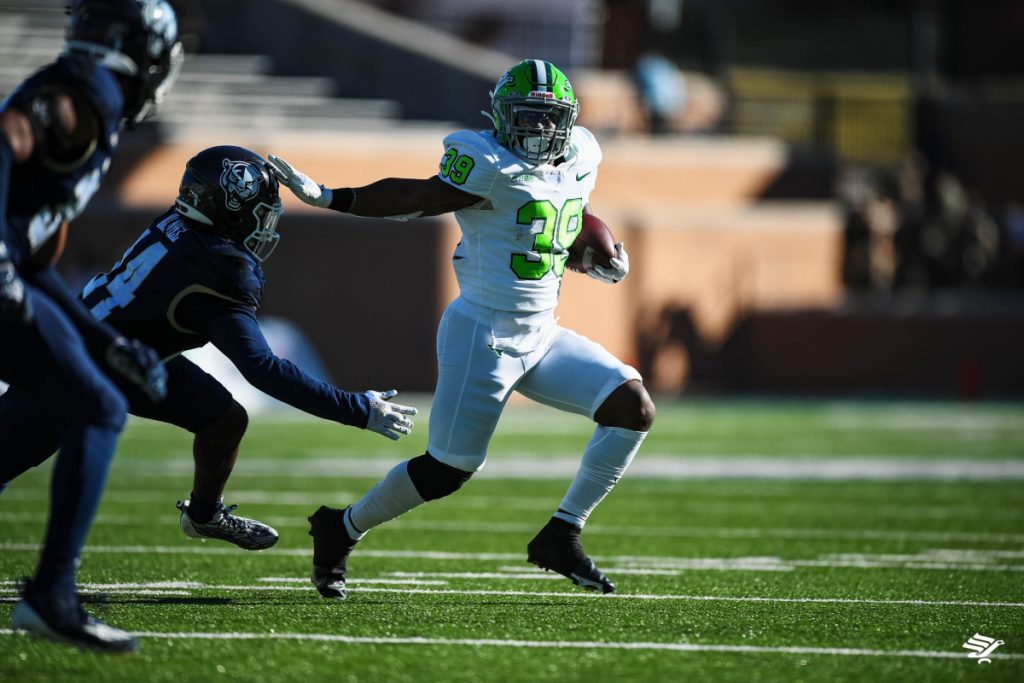 Denton, TX – After a huge double overtime win against LA Tech, the FIU Panthers looked to upset the University of North Texas and improve to an over .500 record. That was not the case, as from the start of the game it just seemed as if the Panthers were outmatched by the Mean Green. Quarterback Austin Aune was the story of the afternoon for the Mean Green, as he threw for 414 yards and five touchdowns. Not only was their passing game working successfully, but so was the run game. North Texas scored touchdowns coming in from Earle Stone and Adeyi Ayo. With the win for North Texas, they are now bowl-eligible. With the loss, FIU drops to 4-5 on the season and the hopes of a bowl game are fading away little by little.

Capping off a great Homecoming with a big W!!

You know things didn’t go well for the FIU offense when Tyrese Chambers only recorded three receptions for 21 yards. Grayson James did have a solid game as he went 19/35, 198 passing yards, zero touchdowns, and two interceptions. For one of those interceptions, you cannot blame James. It was tipped up in the air after he threw the ball. Although the passing yards were high, James struggled against one of the top defenses in Conference USA. As mentioned in the preview, FIU had to rely on the run game. The committee was led by Grayson James (37 yards), Antonio Patterson (33 yards), Flex Joseph (21 yards), and EJ Wilson Jr. (10 yards). Wilson Jr. was the lone offensive player that scored a touchdown in the red zone.

Although we can talk about those as positives for the Panthers, it does not compare to the production of the Mean Green offense. This also can not be compared to what FIU did in the past two games in which the offense was lighting it up. The Mean Green defense allowed only five 3rd down conversions out of the 12 chances that FIU had. And, as mentioned before, they forced two interceptions and a forced fumble.

Memorable Moments of the Game:

Reggie Peterson with the pick – and after a fumble – it's Adrian Cole who runs it in for 6.

He's got a pick and a touchdown today. #PawsUp pic.twitter.com/xUBbjhnwaT

FIU will head back to Miami to prepare for an in-state matchup also known as the Shula Bowl. FAU will head down to the cage as the winner of this match-up will go 5-5 on the season. FIU is 5-15 overall against FAU and in the last edition of the Shula Bowl, FIU lost to a score of 21-58 at FAU. I will not be in attendance for the Shula Bowl. However, I will be attending Coach Mike McIntyre’s weekly Press Conference to see how preparations for the game are going. Stay tuned for the FAU @ FIU preview!