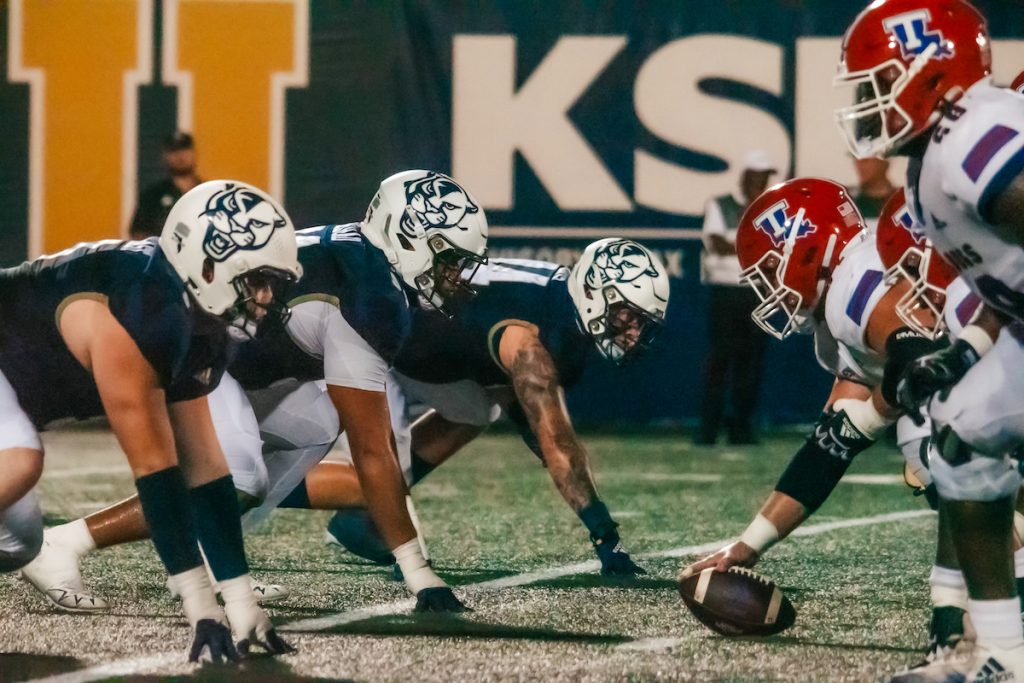 After a huge double-overtime win against Louisiana Tech (42-34), the FIU Panthers are now at .500 with a 4-4 record. The Panthers look to improve to 5-4 this Saturday against North Texas Mean Green (5-4). The Panthers are currently riding a hot streak of two wins in a row, coming off wins against Conference USA teams in the 49ers and the Bulldogs. As for the Mean Green, they are coming off a loss against the Frank Harris-led UTSA squad.

After a huge win against the Charlotte 49ers, the FIU Panthers traveled back to the “cage” to face off against the Louisiana Tech Bulldogs who had come off a disappointing loss against Rice. This turned out to be a Friday Night thriller as the game headed into double overtime and was a high-scoring affair.

This game saw another huge improvement from quarterback Grayson James, who threw for 321 yards and three touchdowns. The main target for James was tight end Rivaldo Fairweather who was targeted six times for 89 yards. The touchdowns came from the Panthers’ receiving trio; Tyrese Chambers, Kris Mitchell, and Jalen Bracey. Two touchdowns came from running back Lexington “Flex” Joseph. The Panthers are now in a bowl game “watch” after their wins.

The North Texas Mean Green has some very talented players. Quarterback Austin Aune, the running back duo of Ayo Adeyi and Oscar Adaway III, and a plethora of receiving depth make up the offense. This Mean Green football team is very well-built and has production from all over the place on the offensive end. The Mean Green defense is where they lack a little, but it is more than enough for this team to have a balance on both ends.

Keys to the game for FIU

Defense: Keep the scoring to a minimum

The Mean Green offense is one that puts up 35.6 points per game which shows how high-powered it is. This is also an offense that relies heavily on the passing game. They have 2,438 total passing yards this season and don’t commit many errors. They’ve only thrown 10 interceptions this season.

The FIU Defense has only converted five interceptions this season but has kept the pressure on when it comes to sacks (17). If FIU wants to stay in this game, they will need the defense to step up. That means getting stops on 3rd down which shouldn’t be a big issue with the inconsistency that UNT has in that aspect of their offense.

With the high scoring that the Mean Green have with both the running and passing game, the Panthers may be involved in a shootout on Saturday. The biggest name to mention is quarterback Grayson James. He is coming off a 31/48, 321 Yds, and three touchdown performance last week. If James is able to put up numbers close to his last start, FIU is in good hands and should be able to keep up with North Texas.

He just keeps on improving #3 👏 @Grayson1James

James will have all of his targets this weekend, so he should be able to play with the same intensity he did against Louisiana Tech. If by any chance the passing game isn’t going well, James will have to turn to his main back, Lexington “Flex” Joseph, who may be the man carrying most of the load. Joseph had 12 carries for 41 yards and 2 touchdowns which is encouraging, but when you go a bit further back, Joseph was used 17 times for 75 yards and 2 touchdowns in FIU’s victory against Charlotte.

Another running back to mention is EJ Wilson Jr. who has had a nice season as the 2nd back on the depth chart (57 Att, 185 Yds, 1 TD, 3.2 Avg). The key for both of these backs will be to keep the chains moving on the ground. This will set up big plays for Tyrese Chambers and the rest of the crew with the air game.

Predictions and Player of the Game

FIU will be a 21.5-point underdog entering this matchup against North Texas. However, this team is riding on two wins in a row and one that can be considered a shootout. North Texas on the other hand is a team that just seems to click well on both ends of the ball. When on offense, they have a balance where they are extremely efficient. This just seems like a game where FIU will be outmatched, but will be in it for portions of the game.

FIU opens the week as a 21.5-point underdog against North Texas, per @ActionNetworkHQ.

It’s possible that FIU will be limited in the passing game due to the strong UNT defense. Relying on the run game may be something we see more of. Meaning, I believe Flex Joseph will have a 100-rushing-yard game along with one touchdown. He will also be crucial on third-down conversions.

FIU will be a little bit overwhelmed this week when it comes to having to deal with maybe the most efficient offense. When the passing and running game both are clicking, it will be tough for FIU to keep up. Burns will finish with 80-100 receiving yards and will score two touchdowns.