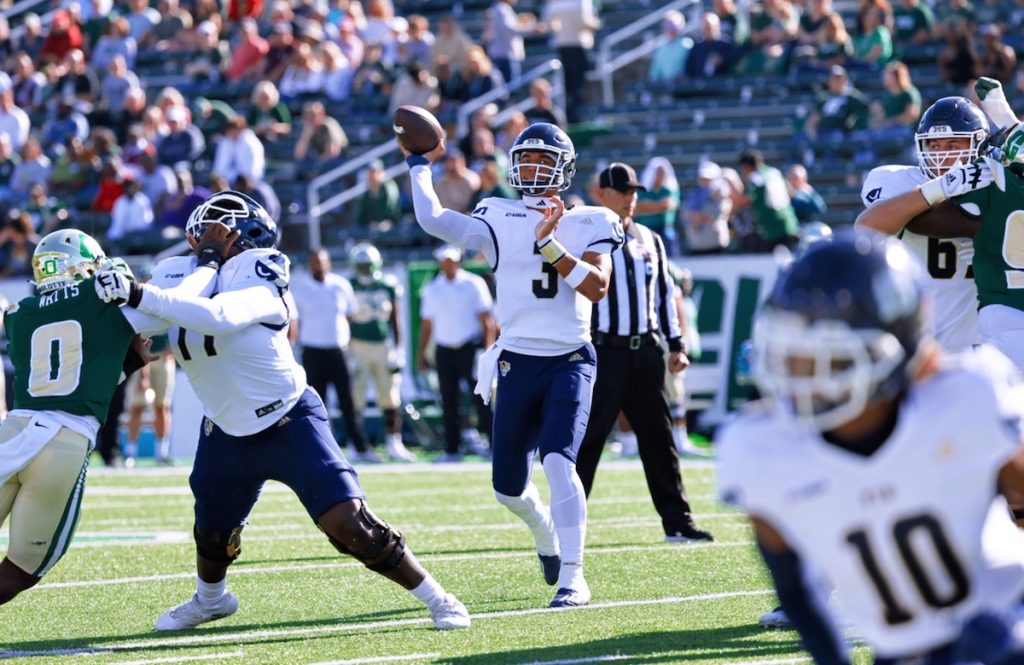 Charlotte, NC – After one of the worst losses of the season, the FIU Panthers were able to bounce back and beat the Charlotte 49ers on the road 34-15. The top performer on the offense was sophomore quarterback Grayson James who rushed for two touchdowns, completing 26-of-33 passes for 306 yards and a touchdown on the afternoon. Although James had himself a day, so did Lexington “Flex” Joseph who rushed for 75 yards, scoring twice. The story of the game though is the Panther defense that produced 5 turnovers (3 INT and 2 Fumbles).

Yes, Grayson James looked amazing this afternoon as he passed for over 300 yards and was able to produce a run game of his own. James scored two on the ground and one in the air thanks to the dynamic duo of Mitchell and Tyrese Chambers. It’s Chambers’ first game back from injury. This can be described as the best game of the season for Grayson given how disappointing he was last week against a really good UTSA squad.

Although James was spectacular, it was not a singular effort. There needs to be credit where credit is due. If it wasn’t for the help of Chambers’s 10 receptions and Mitchell who had 8 receptions and a touchdown, James stats may not look as nice as they did. Flex Jospeh helped out with the workload recording 17 carries for 75 yards and two touchdowns. The Panthers’ ground game allowed the chains to be moved and James was a big part of that. This was a team effort all around.

The sophomore continues to improve each and every game, which today he showed his talent!

Five Turnovers For The Panthers Defense

After having a very nice and competitive first half in last week’s game against UTSA, the defense showed up for the entirety of the game forcing five turnovers. Charlotte quarterback Chris Reynolds had a 59.5 completion percentage, making 22-of-37 passes for 233 yards. Reynolds was sacked five times: three of those coming from Shaun Peterson, one from Jeramy Passmore, and one from Alex Nobles. The FIU Defense also picked off Reynolds three times thanks to Demetrius Hill, Andrew Vomar, and Keegan Davis. Keeping it on the front seven, the Panthers contained each running back to less than 50 yards. This was complemented by the pressure on the quarterback alongside the two fumbles as well. After allowing 33 points to UTSA on Friday night, they gave up only 15 points keeping Charlotte in check throughout the whole game.

After missing a couple of weeks, Tyrese Chambers made his return Saturday afternoon. It was well received as he collected 10 receptions for 143 yards. After two weeks of struggling, Grayson James was able to have his number-one target back. Looking better than ever, he set up the five-yard passing touchdown to Mitchell in the 3rd quarter. Having Chambers back means a lot to this team, utilizing a capable leader and arguably their best player.

After today’s game, you start to ask yourself if the dynamic duo of Mitchell and Chambers is becoming one of the best in Conference USA. It’s getting there for sure. Mitchell is a redshirt sophomore who still has more development required and Chambers is a senior in his final year. This duo can be remembered as one of FIU’s best if they put up games like they did today.

The FIU wideouts did their thing this afternoon 💨

Other names and notes to mention

Jalen Bracey had himself a nice game recording four receptions for 55 yards. Kejon Owens continues to improve with four carries for 13 yards. On the defensive side, Gaethan Bernard accumulated three tackles, Donovan Manuel committed four tackles, and Alex Noble notched five. Shaun Peterson is another big name to mention achieving the three sacks, a crucial contribution to the team’s victory. This marks FIU’s first conference play win since the 2019 season. Their back-to-back road wins are also their first since 2019.

What a birthday gift for LB Shaun Peterson Jr today! 🎁

He had a CAREER-DAY 🔥

– 3️⃣ sacks and a forced fumble

The Panthers return home this Friday to face the Louisiana Tech Bulldogs who are 2-5 on the season. Since 2013, the Panthers are 0-4 against the Bulldogs, but look to take them down and get back to .500 which will make the season a lot more interesting. After the matchup versus Lousiana Tech, the Panthers will travel to North Texas and face the Mean Green. The Shula Bowl with FAU is on November 12th.