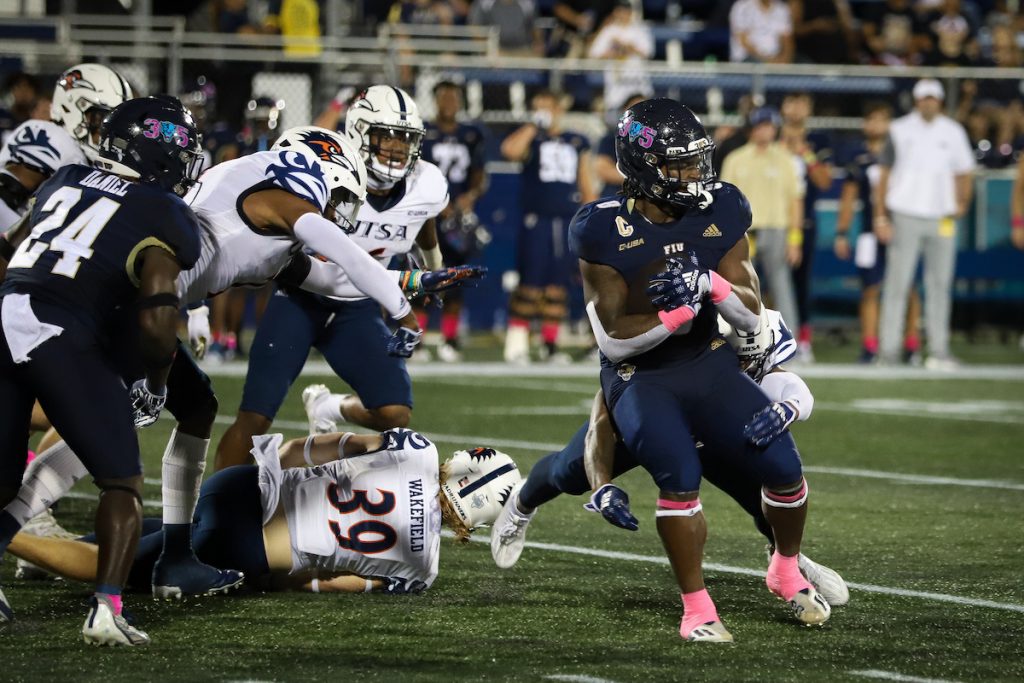 Miami, FL – After dropping their homecoming game this past week, the FIU Panthers lost their second game in a row to a UTSA (FINAL: 30-10) team that featured star-studded quarterback Frank Harris. Harris went 24-35 with 303 YDS and two TD passes. Running back, Kevorian Barnes rushed for 90 yards and scored a touchdown. FIU’s offense struggled to get going all night. Redshirt freshman, Kejon Owens scored his first career touchdown. That was the only touchdown the Panthers scored throughout the entire game. Lexington Joseph was asked about Owen’s performance today and said:

“He played great … he’s like a little brother to me.”

Although the offense had struggles, the defense started off this game in impressive fashion, holding UTSA to a field goal in the 1st quarter and keeping Frank Harris to only 6-7 for 50 yards. Panthers linebacker, Gathen Bernadel had a career-high 15 tackles. When asked about the accomplishment he said:

“It’s obviously nice to have a career-high in tackles, but it’s not about me. It’s about the team, and we have to keep growing as a defense and keep them (the opposing team) out of the endzone.”

The Panthers defense also had two fumble recoveries on the night, which is encouraging to see. Although the first half was impressive, the defense began to break down as the game wore on. They ended up allowing 30 points at the end of the night.

The Panthers keep it close

The story of the first quarter was easily the Panthers defense that held UTSA to only a field goal. The only part that made the first quarter a bit stressful was the missed opportunities for FIU’s offense in the red zone. The Panthers had an opportunity of their own to score but missed the 41-yard field goal to put them on top early. Looking back at the defense, the Panthers kept UTSA in check to the point where they put the offense in position to score. However, just as it seemed like they were close to scoring, FIU fumbled deep in UTSA territory.

❗️FUMBLE❗️@FIUFootball comes away with the ball for their second turnover of the game pic.twitter.com/MJNmEi982F

The Panther defense kept quarterback Frank Harris for most of the first half. Unfortunately for the Panthers, the rushing game was able to keep UTSA in the game and move the chains to give Harris opportunities to do what he does best, which is the passing game.

Towards the end of the 2nd quarter, Harris got it going and began to sling it deep to his receivers. In three-quarters of action, Harris was 16-22, 195 YDS, two TD, and two sacks. As they did in the first half, the Roadrunners’ running game stayed in rhythm with Kevorian Barnes, who had 32 rushing yards up to this point in the game. The FIU defense began to slow down and did not have an answer for the balanced offensive attack.

Frank Harris delivers a beauty while under pressure! @UTSAFTBL extend their lead late in the first half pic.twitter.com/q946NrgwPb

Harris finished the game off with the following stats: 24-35, 303 YDS, 2 TD, 42, Long, and two Sacks. After the game, Coach MacIntyre said the following about Frank Harris:

The Florida Panthers will travel over to Charlotte to take on the 49ers (1-5) who aren’t having the best season so far. The last time the Panthers faced Charlotte, they suffered their first loss to the 49ers in school history. The Panthers will look to improve to 6-1 against the 49ers in what is a must-win game, or a “get-right game” before facing LA Tech.