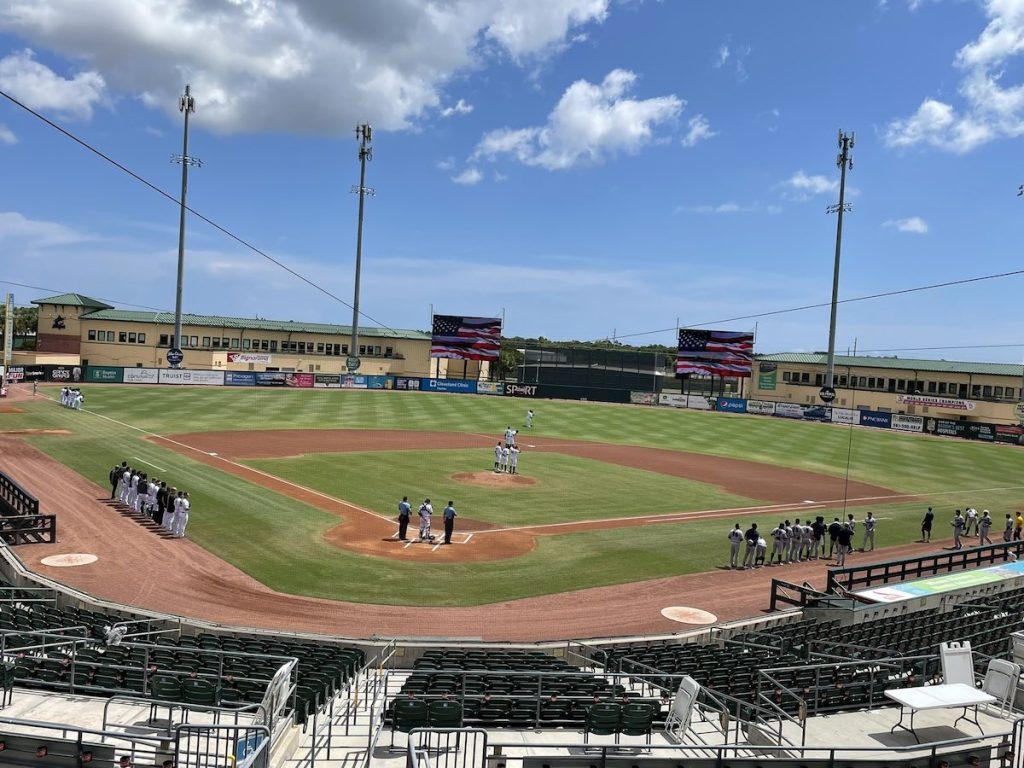 Jupiter, FL – After three straight days at loanDepot Park, and three consecutive losses for the Miami Marlins, I decided a change of scenery was due. I took a trip up the road to the home of the Marlins’ Single-A affiliate team, the  Jupiter Hammerheads.

The Hammerheads played in a Sunday afternoon series finale against the Fort Meyers Mighty Mussels. It was not my first time at a minor league game but saying there’s a difference at the MLB level compared to the minor leagues is an understatement.

There aren’t any fans at Roger Dean Stadium for Sunday games, so there was a different atmosphere right away. I was looking forward to seeing firsthand some of the top prospects in the Marlins minor league system. I saw new rules being implemented at the minor league level and even saw a managerial ejection. The game ended early due to inclement weather but there was still a lot to take away from my time in Jupiter.

As the field was being set up prior to the first pitch I noticed these two lines drawn on the side of the second base. I have never seen that on a baseball diamond before. The lines that are drawn (see below) dictate how far the second baseman and the shortstop can shift prior to a pitch. The team must have a minimum of four players on the infield.

At the major league level, we see shifts being used pretty much for every batter now. The shift has its advantages but it was refreshing to see more of a traditional defensive layout. However, I don’t see this rule reaching the MLB level anytime soon. The players in the big leagues are too talented to be giving them any gaps in the defense for their advantage. This defensive adjustment can help minor leaguers showcase their athleticism when a ball is hit in the hole or up the middle.

Love to see how they implement the new rules regarding the Shift in the Florida State League. pic.twitter.com/tVKukUBi8M

Another aspect of the game that Major League Baseball is trying to improve on is strike zone accuracy. They already have the replay system in the big leagues but you still can’t argue balls and strikes. MLB is using ABS (Automated Ball-Strike) as a “challenge” system during minor league games.

Only the pitcher, catcher, or batter can use this challenge and it has to be immediately after a pitch. When an umpire calls a ball or strike, those three players have the option to appeal the umpire’s call to the ABS system. Each team will receive three appeals and will keep their appeal if it was successful.

Here’s one I haven’t seen before. Automated strike zone, NYY RHP Richard Fitts throws a pitch called a ball, catcher calls for a challenge and Alexander Ramirez strikes out on the overturned call. pic.twitter.com/Mtvki6MPB9

I was a huge fan watching calls by the home plate umpire get overturned. This challenge system can help make the difference between a walk and a strikeout. I saw it on three different occasions a walk get overturned to a strikeout. This helps move the game along without any doubts that the right call is being made.

Future Fish in the Minors

The Miami Marlins have two prospects in Jupiter ranked in Baseball America’s Top 50 list. Shortstop Yiddi Cappe, is ranked No. 25, and third baseman/ DH, Jacob Berry, is ranked No.4. Both were in action for Sunday’s game and they did not disappoint with their performance.

Now hitting against a lefty, Jacob Berry fought off multiple pitches on a 2-2 count in the pouring rain. Ends up with a double down the left field line to bring in two runs. @GoHammerheads now lead 9-4 in the bottom of the 8th. @LemonCityLive #MakeItMiami pic.twitter.com/RBgQFSMpYp

Cappe was hitting in the leadoff spot and Berry was hitting third as the DH. Jupiter scored 9 runs on 10 hits and both players combined provided half the offense for the Hammerheads. Jupiter scored four runs in two different innings, in the first and eighth. Cappe and Berry were in the middle of both rallies.

Berry went 3-4 and pushed across two runs. He got a hit from both sides of the plate which is a great sign to see the switch hitter look more and more comfortable in the batter’s box. Two of his hits came with two strikes in the count and fought off tough pitches. His defense is still a work in progress and third base might not be his future position. His offense, however, is coming around and he is showing why he was one of the top college hitters with LSU last year hitting .370 in 53 games.

Cappe had a great day at the plate solidifying his spot at the top of Jupiter’s lineup. He went 2-5 with three runs batted in and played a clean game at shortstop. The 19-year-old Cuban prospect has shined this year in 49 games across Rookie ball and Single-A. He is hitting well over .300 and the most surprising part of his game is the pop in his bat. He has seven home runs this season and the increased power has not affected his batting average negatively.

Takeaways from the Minors

The Hammerheads won 9-4 but I didn’t come to Jupiter interested in that type of result. I was happy to see a win but even happier to see progress in the lower levels. Shortstop is a position that the Marlins are very thin at all levels. Maybe Cappe could be the future resolution as Miguel Rojas enters his mid 30’s.

Miami is still statistically one of the worst teams on offense in 2022 even after their offseason acquisitions of Jorge Soler and Avisail Garcia. The front office tried to address their lack of power and run production but that has backfired this season. Berry can help with that issue and fans wouldn’t have to wait as long to possibly see him in a Marlins uniform.

Conversation recorded in Spanish and translated into English here… https://t.co/1YgWv1USN9

The 21-year-old prospect is entering professional baseball with two years of collegiate baseball under his belt. His path to the majors might be quicker compared to players getting drafted out of high school. His offense is a little more polished and the Marlins do not have a switch hitter on the current MLB roster. The universal DH rule does help him since they are still figuring out what position suits him best in the infield or outfield.

I did enjoy seeing all these new rules being tested in the minors. The game did move at a quicker pace thanks to the pitch clock and challenge system. The ABS technology used in the game really showed me the improvements Major League Baseball is trying to make in accuracy and umpire/player relations. One pitch can make a difference in any game. ABS can eliminate any speculation that a specific call altered a win or loss.  I’ll definitely be back and hopefully with a crowd in attendance cheering them on.

That’s the ball game here in Jupiter! @GoHammerheads take the series finale against Fort Meyers 9-4, the game was stopped in the bottom of the 8th due to inclement weather. Enjoy this “bat flip” by Jacob Berry @LemonCityLive #MakeItMiami pic.twitter.com/w6Tg0oUkhc