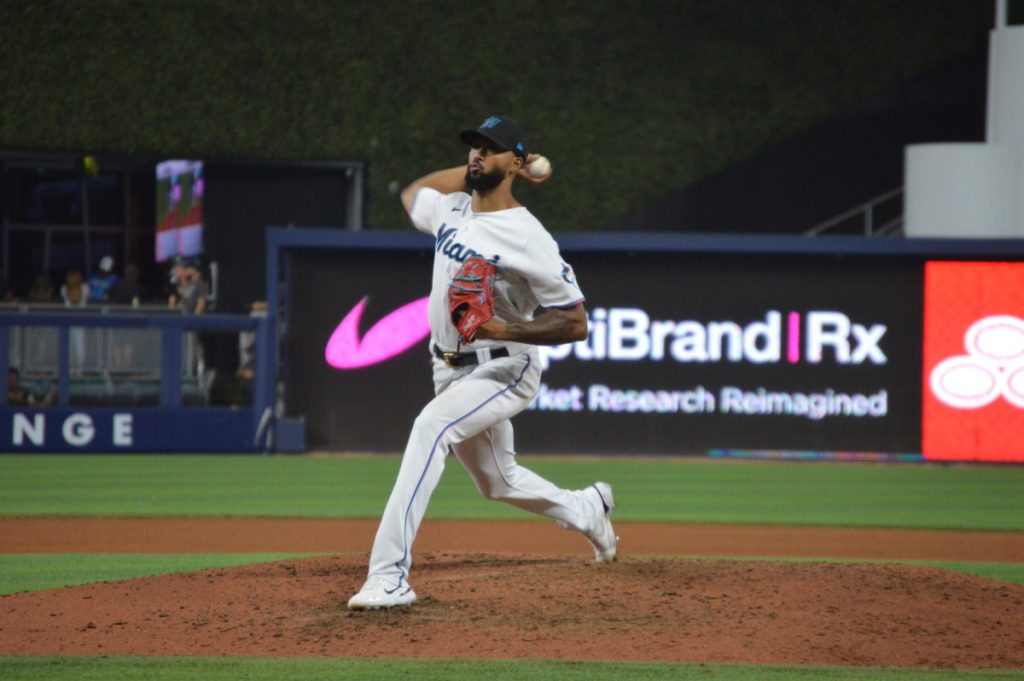 Miami, Florida – It was a tough weekend for the Miami Marlins, to say the least. After getting swept in a four-game series against the Atlanta Braves, Miami’s homestand did not get much easier as the new-look San Diego Padres rolled into town. The Marlins had their ace, Sandy Alcantara, on the mound for the series opener against San Diego. Miami’s ace put an end to their four-game losing streak and dazzled the crowd with seven shutout innings. He led the team to a 3-0 victory, but all eyes were on the Padres and how they will play without Fernando Tatis Jr.

Even though the 22-year-old All-Star is suspended for 80 games due to PEDs, the Padres still feature a deep lineup. The Padres acquired Josh Bell, Brandon Drury, and Juan Soto at the trade deadline. With Manny Machado and Jake Cronenworth already in the mix, there aren’t many weak spots in their batting order.

“I mean, they’re really good, they got Soto, they got Machado, they got Bell right now. I think they mentally was today for me, you know, be aggressive, and just being good about it. Try to get in that mentality, we went outside and I competed with my best stuff,” said Alcantara postgame.

Opposing pitchers have their hands full when going up against San Diego, but Alcantara has not backed down from a challenge all season. It was another Sandy’s Beach Day at loanDepot Park and the fans once again witnessed greatness by Alcantara.

Sandy Alcantara is one step closer to solidifying his place as the National League Cy Young Award Winner. Every time he steps on the mound, he sets new records for the franchise. For the last couple of outings, Alcantara has faced some of the better National League teams like the Mets and Phillies. The run support hasn’t been there for him and he has been on the wrong side of close ball games.

The Horse, or “El Caballo” in Spanish, is Sandy’s new nickname. He’s a workhorse; he goes deep into games on a consistent basis. Going into his outing against San Diego, he led the National League in games started and innings pitched. His ERA was 2.01 and after shutting out the Padres for seven innings, that dipped to 1.92 to take the lead in that category.

Alcantara made a statement right out of the gate. He struck out Soto and Bell in the first inning and struck out the side the following frame. The only concerning issue throughout Sandy’s shutout was his pitch count. After four innings, he was at 76 pitches. He collected six strikeouts after three innings, which was a factor, but he also walked two batters.

Seems like one of those games where Sandy just wakes up and decides to K folks. pic.twitter.com/HGYgOPP7Xa

The Padres fought off pitches and worked the count, but they still did not have an answer tonight against Alcantara. He just got better as the game progressed. The fifth through the seventh inning looked like a breeze for Alcantara compared to the first four innings.

Asked the @Marlins ace about getting back into a groove after a couple of “Un-Sandy Like” performances. The All Star break broke his routine a bit, but his response clearly shows that he’s back into form and always ready to compete. @LemonCityLive #MakeItMiami @sandyalcantar22 pic.twitter.com/EZ4kbg8Udh

He threw only 32 pitches the rest of the way and only gave up one hit. His seventh and final strikeout came in the seventh inning and he finished with 108 pitches. The Marlins were leading 3-0 once Alcantara’s night was over and the bullpen took care of the rest. Steven Okert pitched a scoreless eighth and Tanner Scott collected his 17th save of the season. After tonight’s start, Alcantara joined elite Marlins’ pitching company with Dontrelle Willis and Jose Fernandez.

Sandy Alcántara tossed his 8th start this season of at least 7 IP and 0 ER, tied with José Fernández (2016) for the 2nd-most in a single season in Marlins history.

Only Dontrelle Willis (9) in 2005 had more such starts in a single season for the franchise. pic.twitter.com/LoFwGDAYdH

The Vets Come Through

The Marlins offense has been on a historic slump for the last two weeks. Miami has not scored three runs or more in 15 straight games. Injuries have plagued this team and most of the lineup is being filled with players making their MLB debuts in the last couple of months.

One of those rookies is JJ Bleday and he kicked off the offense for Miami with a solo home run in the second inning. The rookie had set the table and the veterans followed. Miguel Rojas has been a staple for the Marlins for almost a decade and he is having a tough season in the batter’s box. He still leads this team with a positive attitude and his struggles at the plate do not get in the way of his slick defense.

Another veteran on the Marlins that would like to forget the first half of the season is catcher, Jacob Stallings. The Marlins traded for Stallings in the 2022 offseason from the Pittsburgh Pirates after earning a Gold Glove with them in 2021. He was proven on defense and put up decent numbers on offense the last couple of years in Pittsburgh. He was the right catcher for the job to guide a young pitching rotation and help them grow.

Asked Jacob Stallings about his adjustment coming to a new team and if getting to know a whole new pitching staff affected his approach in the batters box. Also mentioned later on that his goal for the season is to help guide Sandy to a Cy Young award. @LemonCityLive #MakeItMiami pic.twitter.com/rL5nRawYpg

After Bleday’s home run, Rojas singled to right field and Stallings kept the line moving with another single. Rojas and Stallings executed a hit and run to give the Marlins runners on first and third with no outs. Another prospect in Miami’s minor league system, Lewin Diaz, has been getting steady playing time recently at the MLB level. He doubled Miami’s lead with a sacrifice fly ball to center field to bring in Rojas.

The duo of Rojas and Stallings would strike again in the sixth inning. With one out in the inning, Rojas tripled and the Padres moved their infield in with Stallings coming up to the plate. Miami’s catcher grounded a single up the middle to give them a 3-0 lead.

That was all the offense for the Marlins and unfortunately, the streak continues. However, on nights when Alcantara is on the mound, three runs are more than enough. Miami looks to take the series win tomorrow night with Edward Cabrera on the mound against left-hander Sean Manaea. The first pitch is scheduled for 6:40 pm.