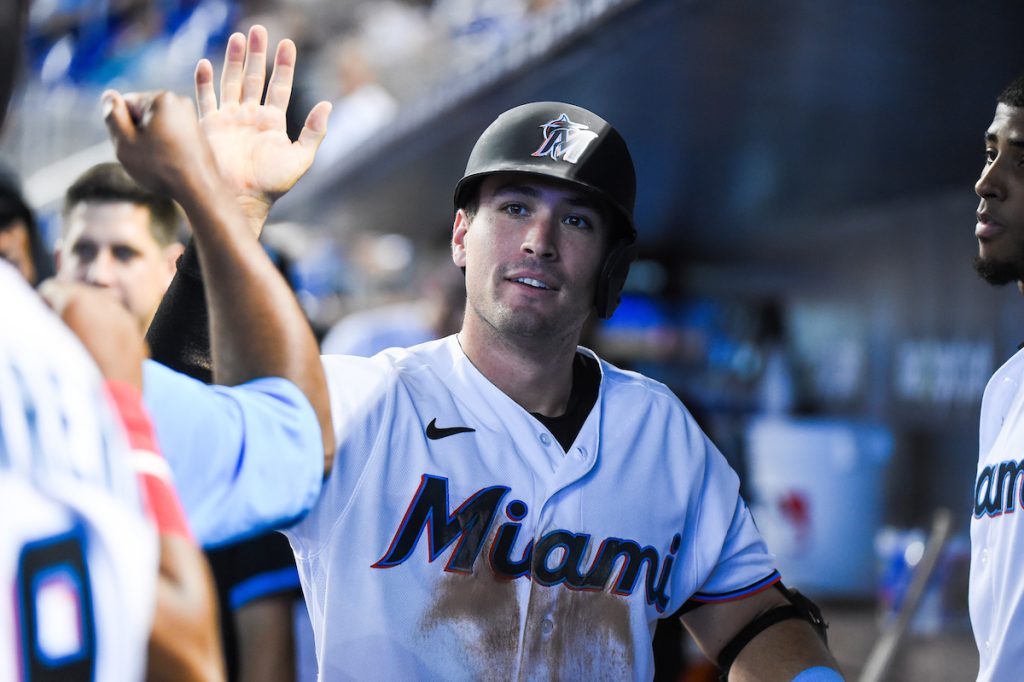 MIAMI, FLORIDA - OCTOBER 03: Nick Fortes #84 of the Miami Marlins is congratulated by teammates after hitting a home run during the fourth inning against the Philadelphia Phillies at loanDepot park on October 03, 2021 in Miami, Florida. (Photo by Eric Espada/Getty Images)

Miami, Florida – The streak is finally over. After scoring four runs against the San Diego Padres Tuesday night, the Miami Marlins snapped a 16-game streak of scoring three runs or less in a game. Miami won game two of their series against the Padres 4-3 after shutting them out in the opener. Miami has finally won a series against a National League team with a record over .500.

Sandy Alcantara dominated on the mound in game one and Edward Cabrera was next in the rotation to go up against a talented San Diego lineup. This game was another showcase for the rookies on Miami’s roster. They led the team to their first series win in over two weeks.

Minutes away from first pitch of game 2 of a 3 game series between the @Padres and @Marlins Lineups have been announced and Miami is going with Edward Cabrera on the mound to lock up a series win. Sean Manaea will start for San Diego @LemonCityLive #MakeItMiami pic.twitter.com/NIYiZIH7Sz

In the series opener, the Padres made Alcantara throw a lot of pitches early in his start. He had 76 through four innings. San Diego continued that strategy in game two against Cabrera. In the first inning, he threw 23 pitches but did strike out Juan Soto and Manny Machado.

Edward Cabrera gets Juan Soto looking on what was objectively by all accounts absolutely and certainly a strike @Marlins | #MakeItMiami pic.twitter.com/RNMWaXsYPH

After two innings of work, he collected four strikeouts and escaped a bases-loaded jam in the second inning. It was a high-stress outing for Cabrera. He never pitched an inning where he retired the side in order and always had traffic on the bases. His command did not help with his pitch count either. He issued two walks in critical moments but buckled down to keep the Padres off the scoreboard.

Cabrera’s night was over after 91 pitches through four shutout innings. It wasn’t the most efficient outing, but the young right-hander showed flashes of “ace” material. Miami was leading 2-0 after the fourth inning thanks to Cabrera’s batterymate. The only issue was, that Manager Don Mattingly had to piece together the last five innings of the game with a bullpen that is running on fumes.

The Magic Number is 4!

The next pitcher in the Padres rotation this series was southpaw, Sean Manaea. The Marlins have had their struggles against left-handed pitchers all season, but Mattingly put together a lineup with just enough pop to get the win. Nick Fortes called a great game behind the plate and caught six different pitchers, including an MLB debut.

He took full advantage of getting the start and had a career night in the batter’s box as well. His memorable night started in the second inning with two outs. After Brian Anderson and JJ Bleday struck out, Fortes provided some two-out lightning. On a 1-1 count, he blasted a solo home run to AutoNation Alley in left-center field.

The Marlins would rally with two outs in the bottom of the third thanks to Jesus Aguilar. Miami had runners on first and second and Aguilar grounded to Machado, but the ball took a bad hop and went down the left field line. Peyton Burdick scored to give Miami a 2-0 lead.

Fortes’ night was only getting started. In the bottom of the fourth, he was due up second. Fortes came up to bat and he looked extremely comfortable against the left-hander. He took a mistake pitch by Manaea down the middle and launched it over the left field wall to give Maimi a 3-0 lead. It was the first multi-homer game in Fortes’ young MLB career.

He would go on to add another base hit in the seventh and came around to score after Burdick doubled down the right field line. When Fortes scored, the Marlins finally captured that elusive fourth run.

After Cabrera exited through four innings, the Marlins had to use what was left of their bullpen to get 15 outs. Mattingly already announced prior to the game that their closer, Tanner Scott, was off limits after heavy workloads the previous two games. The Marlins had to use their pitchers like chess pieces and just go with the best possible matchup.

The first out of Miami’s bullpen was Huascar Brazoban and he pitched a scoreless fifth inning. In the sixth, lefthander Andrew Nardi made his MLB debut. He threw a 1-2-3 inning and collected his first big league strikeout against Trent Grisham.

Mattingly kept Nardi in the game for the seventh inning and his debut went a bit south. He surrendered a single to Ha-Seong Kim to lead off the inning. He struck out Jorge Alfaro for the first out, but Jurickson Profar singled and Soto loaded the bases with a walk.

Nardi’s debut was over and the next pitcher out of Miami’s bullpen was Elieser Hernandez. It was a high leverage situation and it did not get any easier with Machado being the first batter Hernandez faced. On a 2-2 count, Machado drilled a hanging slider to left-center field to clear the bases. With one swing, the game was tied 3-3. Hernandez got the remaining two outs in the inning and stayed in the game for the eighth.

Play of the Game

Wil Myers led off the eighth with a double and the tying run was in scoring position. The very next play, however, changed the momentum of the game in Miami’s favor. Hernandez got Grisham to fly out to right field and Brian Anderson threw out Myers tagging up from second base. Anderson’s throw was right on target and showed why Mattingly trusts him in the outfield even though he’s primarily a third baseman.

What a dot from Brian Anderson to double up the Padres and keep the Marlins in control! pic.twitter.com/OyMeIpqRmx

Even with two outs, Hernandez was not in the clear yet. He walked Kim and Mattingly saw enough. Miami’s skipper dipped into his bullpen again and Richard Bleier came in to finish the inning. Bleier immediately gave up a single to Brandon Drury and the Padres had runners on the corners. The rally would stop there for San Diego as Profar grounded out to end the scoring threat.

Bleier was kept in the game to start the 9th for the lefty vs lefty matchup against Soto. He reached base with an infield single and ended Bleier’s short outing. As many expected, Dylan Floro came out of Miami’s bullpen to close this game. Floro has some closing experience in his career. He saved two games this season and closed out 15 games for Miami last season. Machado greeted Floro with a base hit to right field and the Padres had the go-ahead run on base.

Floro’s closing experience would prevail. Pitching in high leverage situations is nothing new for Floro. He was the primary setup man for Kenley Jansen in the Dodgers bullpen and was an important piece to their 2020 World Series Championship. After giving up the single to Machado, Floro would go on to strike out the side. Josh Bell, Jake Cronenworth, and Wil Myers all went down on strikes.