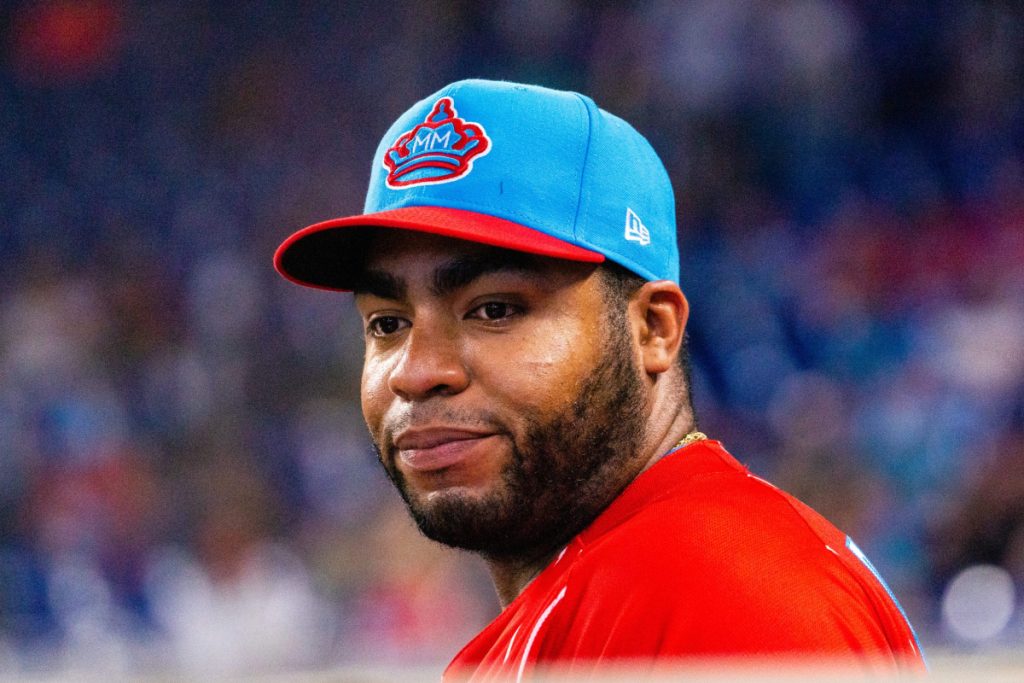 Miami, Florida – It has been a few weeks since the MLB trade deadline and the Miami Marlins have hit some rough waters. They are out of the wild card race and giving more opportunities to their young players being called up from the minors. The opposite can be said about their opponents, the Los Angeles Dodgers. Going into this series against Miami, the Dodgers have won 41 of their last 50 games!

The Marlins just came back from a west coast trip in which the Dodgers swept them. Now they had to face the 2020 World Series Champions at home for four games. Miami opted to go with a bullpen game in the series opener and the starting nine looked nothing like how it did on opening day. There have been injuries plaguing Miami and questionable roster moves. There hasn’t been much to cheer in the Marlins’ clubhouse recently and more bad news was on the way.

Prior to the first pitch, the Marlins announced that they have designated first baseman/ DH Jesus Aguilar, for assignment. After Garrett Cooper was reinstated from the IL, the Marlins had three first basemen on the 25-man roster. The front office decided to go with Lewin Diaz getting the bulk of the playing time at first base while Cooper is the primary DH.

Jesus Aguilar speaks to the media one last time, was DFAed earlier today after Cooper was reinstated from the IL. Talks about his time with the #Marlins and where he sees the franchise in the near future. Solid tenure overall, hopefully he gets on a playoff team @LemonCityLive pic.twitter.com/sDZAi1OFlI

Aguilar rejuvenated his career when he came to Miami. He was claimed off waivers by the Marlins in 2019 after a down year with Milwaukee and Tampa. He instantly became an integral part of the team and was inserted in the middle of Miami’s lineup. In the 2020 shortened season, Aguilar was one of the leaders in the clubhouse and helped Miami snap their 17-year playoff drought.

In 2021, he continued to shine for Miami. He led the team in home runs (22) and was one of the top RBI leaders in the National League with 93. Even with the emergence of Lewin Diaz, Miami still kept Aguilar for the 2022 season while giving Diaz playing time every day in the minors.

Aguilar hasn’t been able to repeat his production from the previous two seasons. Miami has been out of the playoff race for a while now and the franchise has decided to go with the youth route to finish off the year. He does lead the team in home runs and RBIs again but the Marlins have been one of the worst offenses in baseball all season. The writing was on the wall once Cooper came back, but his time in Miami brought new life to his career.

Aguilar would need to get picked up by a team before August 31 to be eligible for the playoffs.

They Had Them in the First Half

There was a lot of emotion in the Marlins clubhouse after the news broke on Aguilar but they still had a game to play. Miami went with Tommy Nance as their opener and he threw two scoreless innings. The bullpen method was working well for Miami in the first half of the game.

Nance, Huascar Brazoban, and Bryan Hoeing combined to throw five shutout innings against a dangerous Dodgers lineup. Los Angeles’ lineup had an All-Star from the first batter through the eighth. There isn’t any breathing room when facing the Dodgers batting order especially when it features three MVPs.

Huascar Brazoban punching out Cody Bellinger in an important situation, just like everybody predicted entering this season pic.twitter.com/12g3stPJ7t

Miami’s offense was also shut out through the first five innings against the Dodgers starter, Tyler Anderson. It was no surprise to see Miami struggle against the southpaw. Lefties have been Miami’s kryptonite all season. The Marlins have a collective batting average of .200 against left-handed pitchers.

The game remained 0-0 after five, but the second half of the game was a seesaw battle.

Probably could've gone a little further had he gotten better help behind him earlier in the inning.

Evan Phillips gets the Dodgers out of further trouble.

In the top of the sixth, Hoeing entered in his second inning of relief. The Dodgers finally cracked the scoreboard on a Chris Taylor sacrifice fly to bring in Will Smith. The Marlins responded in the bottom half of the inning when Joey Wendle doubled with the bases loaded. Two runs scored for Miami to give them a 2-1 lead.

One of L.A.’s MVPs, Mookie Betts, had himself a game. It started in the top of the seventh when he gave the Dodgers the lead again with a two-run home run off of Dylan Floro. Floro was facing his former team and was part of their 2020 World Series run. He would finish the seventh inning and was off the hook for the loss when Miami came roaring back.

There is being Him, and then there is whatever Mookie Betts is.

Mookie had THREE go-ahead hits tonight, including two home runs, and delivered the fatal blow in a 10-5 win for the Dodgers over Miami. pic.twitter.com/PM2aPgJlvt

The Marlins loaded the bases again in the bottom of the seventh. Miami’s captain, Miguel Rojas, singled to right field to tie the game 3-3. With the bases still loaded Wendle was up to bat and came through once again. He reached base on an infield single and brought in JJ Bleday. Miami was using “small ball” and stringing together consecutive hits to rally against the Dodgers’ pitching staff and now led 4-3.

It is extremely hard to keep this Dodgers offense quiet for nine innings. Miami has had its fair share of one-run games and was trying to be on the right side of it tonight. Tanner Scott came out of the bullpen for Miami to close it out. Betts had other plans and continued his incredible day at the plate. With one out in the top of the ninth, he tied the game with one swing. He belted his second home run of the game and it was now 4-4.

MOOKIE BETTS IS A DODGER FOR LIFE

The Dodgers rallied with two outs to take the lead. Freddie Freeman singled and Smith and Max Muncy drew walks. Don Mattingly saw enough out of his closer and went deeper into the bullpen. Cole Sulser entered with the bases loaded and Justin Turner gave LA the lead with a single up the middle.

Miami’s deficit did not last very long, however. In the bottom of the ninth, Peyton Burdick led off the frame with a solo home run off of veteran David Price. It was now 5-5 and it stayed that way into extra innings. Los Angeles’ offense finally erupted in the tenth and poured it on Miami.

Peyton Burdick shows off his power by driving one over the center-field wall to tie the game. The ball left his bat at 106.4 MPH and traveled 405 feet. pic.twitter.com/xGNEACE9es

Rookie left-hander, Andrew Nardi, was on the bitter end of a Dodgers rally. He surrendered five runs on five hits and Miami was trailing 10-5 in their final at-bats. The Marlins scratched out a run in the bottom of the tenth to make it 10-6 but their comeback fell short.