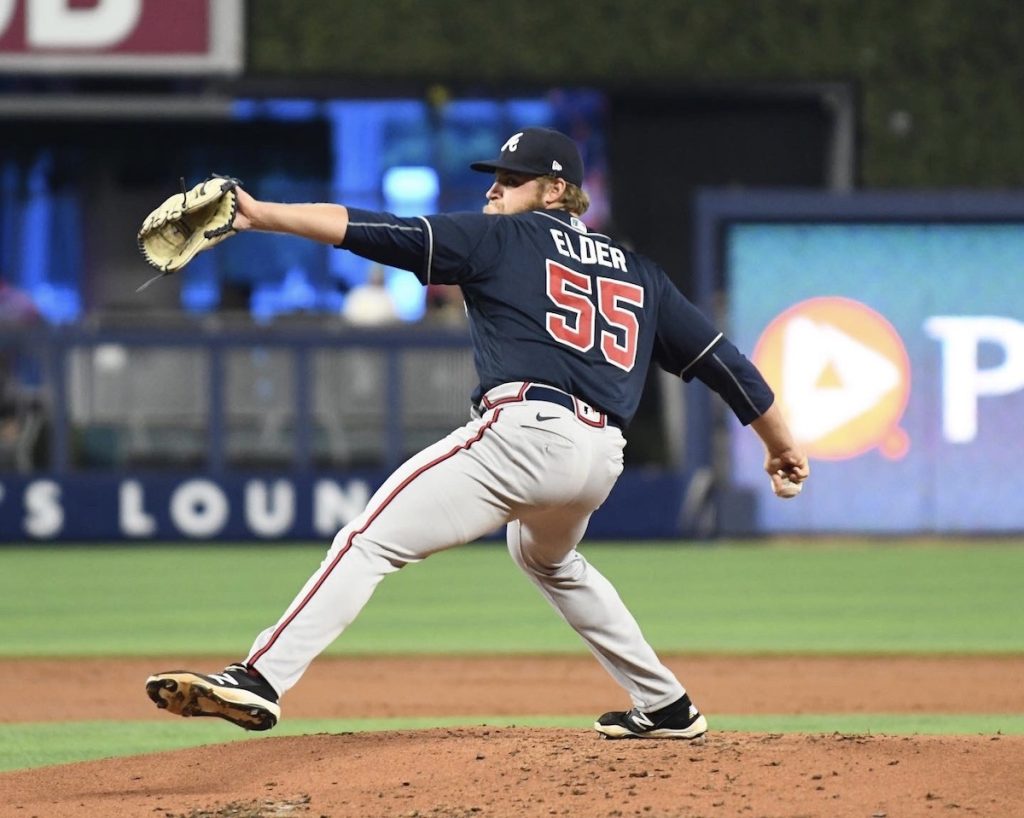 Miami, Florida – If fans were hoping for a better outcome they were wrong.  Tanner Scott failed to protect the 1-0 lead as the Miami Marlins were swept. On his first pitch in relief, Michael Harris II took his fastball and launched it over the fence at center field. William Contreras grounded up the middle with Jon Berti making the diving stop, however, the throw home was too late. Atlanta tacked an additional run on Scott’s wild pitch.

Miggy Ro drives in the first run of the game!

The Fish only put up five hits Sunday afternoon. Bryce Elder produced his first career double-digit strikeout game punching out 10. Elder’s lone blemish was against El Captain. Miguel Rojas flared an RBI single back in the fourth scoring JJ Bleday for the precious run. Bleday got on base with a double to center going 1-for-3 on the day drawing a walk.

For a while there it seemed like this was just enough to evade another sweep. Braxton Garrett pitched six innings of shutout ball backed by the defense. Brian Anderson threw out Eddie Rosario at home plate during the second inning denying Atlanta the run. Playing off the hop, Andy showed off that cannon of an arm firing it at Nick Fortes. It wasn’t even close.

Brian Anderson throws out Eddie Rosario on a close play at home. pic.twitter.com/W7xqftHEwN

Fortes also caught Dansby Swanson trying to sneak his way to third in the ninth forcing a rundown. It was all in vain. To be clear, it wasn’t just Tanner Scott it was the Miami Marlins as a whole. The Fish have now lost four in a row with the Braves on a six-game winning streak. The Marlins are now 50-65.

All right, so I’ve been wanting to do a section on Bleday for a while now. For those not in the know, I followed JJ since his mashing days for Vanderbilt. The former Vandy Boy slashed .326/.449/.553 for his college career crushing 33 long balls, 27 of those during his final year in 2019. That season he led the nation in home runs even outpacing UM’s own Alex Toral.

S/O to JJ Bleday, BV Alum and current Vanderbilt player, for hitting his 22nd Home Run of the season and tying Pedro Alvarez as Vandy’s All Time Home Run King!! The most recent mock MLB Draft has JJ going #5 in Round 1 #Proud #BVNation pic.twitter.com/AtF2jxa3k9

Since his debut on July 23rd JJ Bleday’s numbers is frankly to be expected for a rookie. Slashing .208/.296/.375 entering today’s game, the 24-year-old’s numbers weren’t too brilliant in the minors either. His best was during Arizona Fall League where he recorded a 1.035 OPS, granted this was 24 games and 115 plate appearances. His OPS was .835 in Triple-A Jacksonville, meaning what ladies and gentlemen? He gets on base. Bleday led the Jumbo Shrimp in walks with 60. However, he does have a strikeout issue.

His 27.2% K rate is above the league average and even if you compare him with others on similar plate appearances it’s not pretty. Remember how I mentioned he led the Shrimp in walks? Well, he was tied for first in Ks with 99. The other fella is Peyton Burdick. Thus far in the extremely small sample size, his OPS in the majors is .693 including 10 walks and 23 whiffs.

Bleday is definitely a work in progress but Marlins fans should take comfort in his future contributions to the team. He will be a solid investment in the outfield. Assuming they don’t trade him.