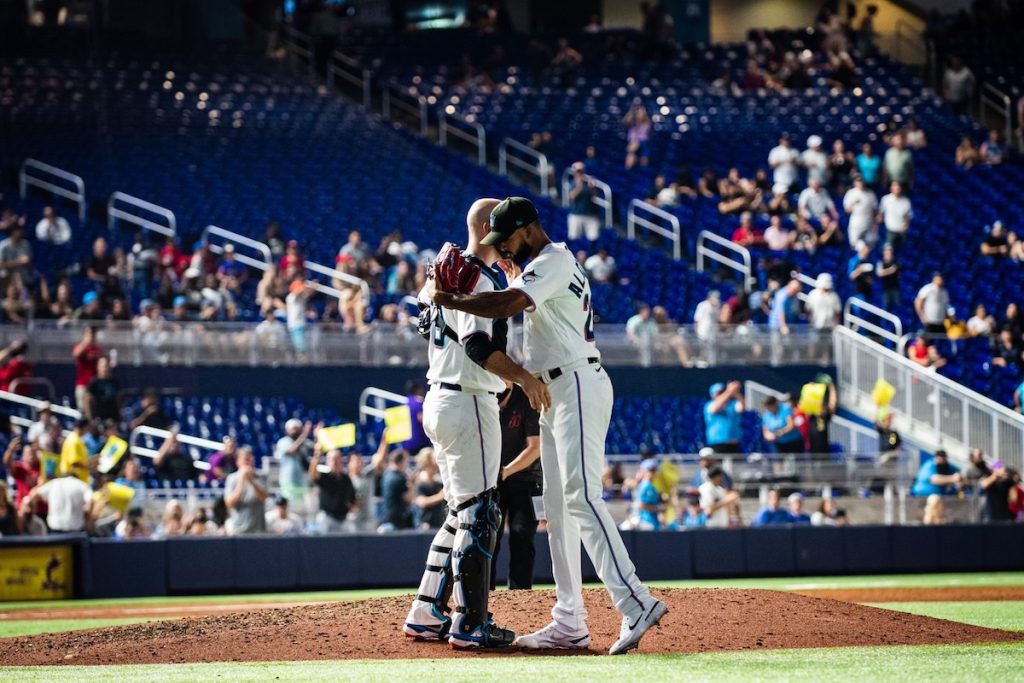 Miami, Florida– It has been a brutal home stand for the Miami Marlins. After getting swept by the New York Mets over the weekend, Miami was on the verge of getting swept again at the hands of the Cincinnati Reds. They wrapped up a six-game stretch Wednesday night with their ace, Sandy Alcantara on the mound.

Miami’s offense has been reeling over the last couple of weeks and giving their starters run support has been a glaring issue. It does not help that the Marlins have over 15 players on the IL but reinforcements are slowly coming back. Garrett Cooper was reinstated from the 10-day IL and Miami was glad to have their All-Star DH back in the lineup.

Series finale between the @Marlins and @Reds starts in a few minutes. Miami looks to avoid a sweep and they have the right man on the mound to snap their 5 game losing streak. It’s another Sandy’s Beach Day at loanDepot Park let’s get tropical!! @LemonCityLive #MakeItMiami pic.twitter.com/kU2xr69oIH

Back on Track for Alcantara

The last two outings for Alcantara have been “Un-Sandy like” as manager, Don Mattingly, likes to describe it. He has arguably been the best pitcher in all of baseball but a hiccup here or there was bound to happen. As great pitchers do, they bounce back.

Alcantara’s night was off to a rocky start, however. In the opening frame, Alcantara gave up a leadoff single to Jonathan India and then walked Mike Moustakas with one out. Joey Votto loaded the bases with a single and Alcantara was in an early jam. The next two batters, Donovan Solano and Aristides Aquino grounded back to Alcantara. He showed his fielding abilities to get the force-outs and escaped the bases-loaded jam unscathed.

That was the best opportunity the Reds would get to score off of Alcantara. From the second inning on, he looked like the Sandy that dominated Major League Baseball in the first half of the season. He scattered four hits in the final eight innings but got some help from the defense along the way.

In the seventh inning, Cincinnati singled in back-to-back at-bats with one out. Sandy went back to his most reliable pitch, his sinker, to put an end to the Reds’ small rally. Hometown product, Albert Almora, was up to bat and grounded to Miguel Rojas for the 6-4-3 inning-ending double play.

Sandy gets another double play! #Reds got back-to-back singles with one out but Sandy gets Albert Almora to ground into a 6-4-3 DP to end the inning. Seventh inning stretch at loanDepot Park and the #Marlins lead 3-0. @LemonCityLive #MakeItMiami

Almora was the second victim of the Reds to ground into a double play. Alcantara would go on to retire the Cincinnati hitters in order in the final two innings. He earned his 10th win of the season and his third complete game of 2022. This performance was also the first shutout of the season and the third overall in his young career. It was another electrifying night at Sandy’s Beach!

GIVE HIM THE CY YOUNG pic.twitter.com/tYOreaNotV

The “Big Boys” Came to Play

There hasn’t been a lot of power coming from the Marlins lineup this season. The front office tried to address that issue in the offseason with the signings of Jorge Soler and Avisail Garcia. Their seasons have been huge disappointments and the returning veterans have dipped in production from last season.

Jesus Aguilar had a great 2021 season and was one of the National League’s best-run producers. That hasn’t transferred over to 2022 but he remains a constant in the middle of Miami’s lineup. He pulled through today in the fourth inning to give the Marlins’ offense a shot in the arm after they scored two combined runs in the first two games of the series. On a 1-1 pitch, Aguilar crushed a hanging slider over the left field wall to put Miami on the scoreboard with a solo home run.

In the following inning, the Marlins were able to get runners in scoring position but bringing them in has been a problem all season. With two outs in the inning, Garrett Cooper made an immediate impact on his first day after being out for almost two weeks.

In his first game back from the IL, Garrett Cooper talks about coming through in the clutch with two runners in scoring position and giving the @Marlins a 3-0 lead. @CoopaLoop1 #MakeItMiami @LemonCityLive pic.twitter.com/LgOqP0e17K

He gave all the run support Sandy needed with one swing. With two strikes in the count, he doubled off the left field wall to bring in both runners. With a 3-0 lead after the fifth inning, Sandy took care of the rest on the mound.

After the double steal by Williams and Hamilton gets runners in scoring position, Garrett Cooper comes through with the 2-RBI double to make it 3-0! Welcome back, Coop!@Marlins | #MakeItMiami pic.twitter.com/EyZ1XQstam

The Marlins had to get creative to score their runs in this game. When an offense is struggling sometimes playing “small ball” can be an alternative. The bottom of Miami’s lineup with Luke Williams and Billy Hamilton sparked their rally in the fifth inning and led to Cooper bringing them in with his double.

Williams leaned on one of Miami’s strengths all season which is stealing bases. Every time he reached base he had the green light to steal whenever. He went 3-3 with two singles and a double and was a menace on the basepaths. He finished the game with three stolen bases, one shy of tying the franchise record in a single game.

Hamilton chipped in with a stolen base of his own and it occurred when Williams was on base as well. They executed a double steal in the fifth inning and the Marlins continue to lead all of Major League Baseball in the stolen base department with 88.

The smoke has cleared from the MLB trade deadline on Tuesday, August 2nd. Players should feel a lot more comfortable on the field now knowing they are staying put. The Marlins will continue their season somewhat out of the playoff race, but they can still make a respectable year out of it. If they eclipse 67 wins this season, that would be the most wins under the Sherman ownership group since they took over in 2018.