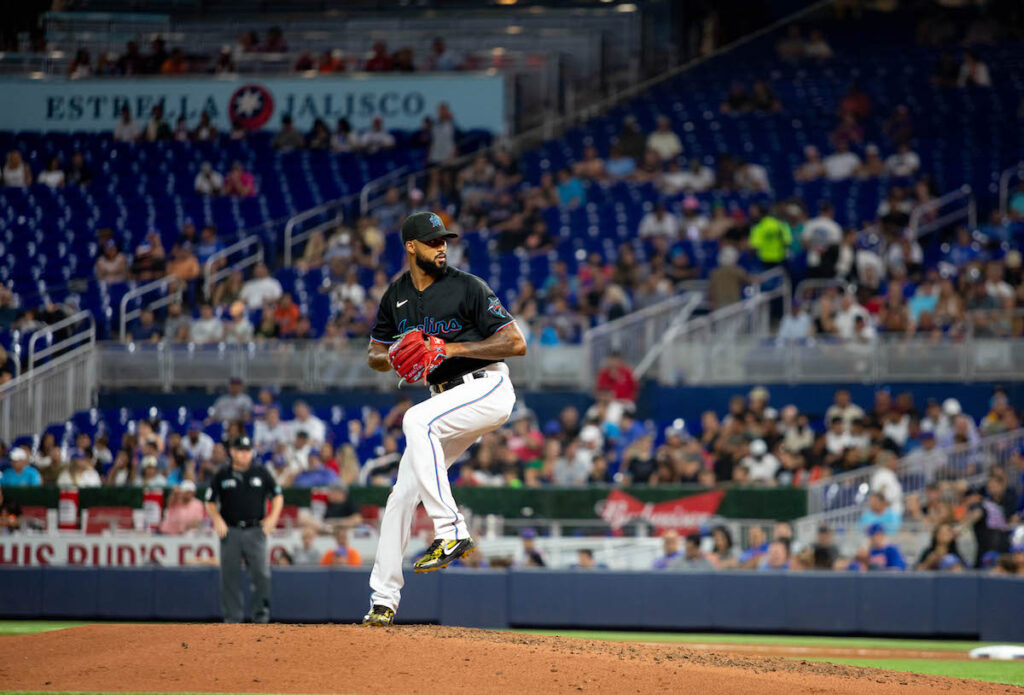 Miami, Florida– The Miami Marlins were in good shape heading back home with Sandy Alcantara on the mound to start a three-game series against the New York Mets. Miami is coming off a 4-3 road trip against the Pittsburgh Pirates and Cincinnati Reds and have managed to say in the wild card race as the trade deadline approaches.

The Mets (61-37) entered this series against Miami (47-52) with a three-game lead in the NL East division while the Marlins are only five games out of the final wild-card spot. This was the 100th game of the season for Miami and every game down the stretch has even greater importance. Alcantara has been sitting on nine wins for the last three starts and he looked to get win number 10 which would be a career-high.

Minutes away from first pitch and the start of a 3 game series between the @Marlins and @Mets It’s another Sandy Alcantara home start and Sandy’s beach section is filling up! Will be covering first two games and @Gabewritesports has the series finale. @LemonCityLive #MakeItMiami pic.twitter.com/n66HR0WjWX

Sandy was coming off a rough start, by his standards, against the Pirates. It snapped a streak of 13 games where he went at least seven innings in an outing. He pitched six innings and struck out ten but walked three. Pittsburgh also scored two runs off of Alcantara and his performance transferred over to the series opener against New York.

Miami’s offense opened with three runs in the first inning against Mets’ starter, Chris Bassitt. It was great to see the Marlins’ lineup give their ace an early lead after not getting much run support in previous outings.

The 3-0 lead did not last very long, however. In the top of the second, the Mets scored three runs of their own to tie the game. New York scored all three runs with two outs and the walks proved to be costly for Alcantara. Miami retook the lead in the bottom half of the inning. Miami scored a run while Joey Wendle grounded into a 4-6-3 double play with runners on first and third base.

Brandon Nimmo gets one back with an RBI double and the Mets are on the board pic.twitter.com/1kmynr7dPL

It seemed that four runs would be more than enough with Alcantara on the mound but that wasn’t the case in this game. Just like in his last outing, he walked three batters and was giving up hard contact. The Mets collected eight hits off of Alcantara and six of them were for extra bases. The last time Alcantara gave up at least four runs was on June 24 and coincidentally it was against the Mets at home.

New York tied the game again in the fourth inning to make it 4-4 and it was the last run they scored off of Alcantara. Miami’s ace was not fooling many Mets but there was one player specifically that had Alcantara’s number all night.

Sandy Alcantara talks about his start against the #Mets and how tough their lineup is. Also talks about how he adjusted after throwing over 50 pitches in the first two innings. @Marlins #MakeItMiami @LemonCityLive pic.twitter.com/kDuHTK2ctI

An Old Friend Returns in Fashion

There are not many players in Major League Baseball that have had success against Alcantara. One of those players is former Marlin, Starling Marte, who got some payback on his former team. Two out of the six extra-base hits against Alcantara belonged to Marte and both came in clutch moments.

In the second inning, the Mets were rallying against Alcantara and had already scored one run before Marte came up to bat with runners on second and third base. On a 1-0 pitch, Marte lined a 98 mph sinker to the right-center field gap to bring in Brandon Nimmo and Tomas Nido. If Nido did not draw that two-out walk, the Mets would not have been in the position to bring up the top of their lineup with Nimmo and Marte. Both players ended up driving in all three runs.

THE METS ANSWER BACK WITH 3 RUNS OF THEIR OWN IN THE 2ND!

Starling Marte drives in 2 with a triple! pic.twitter.com/W8Je3oj05X

Marte was a one-man wrecking crew. Just like in the second inning, the Mets scored in the fourth with two outs. Marte showed off his opposite-field power and took Alcantara deep. He homered off a 99mph fastball up and away and Marte got great extension on the pitch.

The two-time all-star had a short but sweet stint in Miami and is now playing exceptionally well on a first-place team. It seems he plays at an even higher level when the Mets face the Marlins. In 42 at-bats this season against Miami, Marte has 14 hits. That includes the 3-5 performance he had today and was a double shy of completing the cycle. All the damage Marte did was against Alcantara but he had some help later in the game to carry the offense against Miami’s bullpen.

The Marlins’ offense was shut out the last seven innings of the game. Bassitt settled in to give New York six solid innings and their bullpen kept it scoreless in the late innings. The Mets were able to break the tie in the eighth inning off of Steven Okert. Don Mattingly went with the southpaw out of the bullpen due to the number of lefthanded hitters New York has.

Eduardo Escobar led off the inning with an infield single and Miami lost their replay review after challenging the play. Nido moved Escobar to scoring position with a sacrifice bunt and leadoff hitter, Brandon Nimmo, took care of the rest.

Okert missed his location with a slider and Nimmo took advantage of it by launching the pitch to the upper deck in right field. The two-run shot gave New York a 6-4 lead and they never looked back. The combination of Nimmo and Marte at the top of the lineup went 5-10 and brought in all six runs.

Brandon Nimmo gives the Mets the lead in the 8th! @shea_station pic.twitter.com/fM3pWzwMWE

Trevor Williams pitched a scoreless eighth inning and Edwin Diaz picked up his 23rd save of the season. Diaz was one pitch away from an immaculate inning in the ninth. He threw 10 pitches, all strikes, and struck out the side.

It was an uneventful ending for the Marlins and a tough loss after competing against one of the top teams in the National League. The Marlins now fall six games back in the wild-card race and losses around this time of the season hurt a lot more. Miami looks to even the series tomorrow against Carlos Carrasco and they have not yet determined a starter for that game. The first pitch is scheduled for 6:10 pm.

Steven Okert talks about his appearance in the 8th inning and his matchup against Brandon Nimmo that ended up being the decisive hit to give the #Mets the lead and win. @marlins @LemonCityLive pic.twitter.com/50GOEigEpv