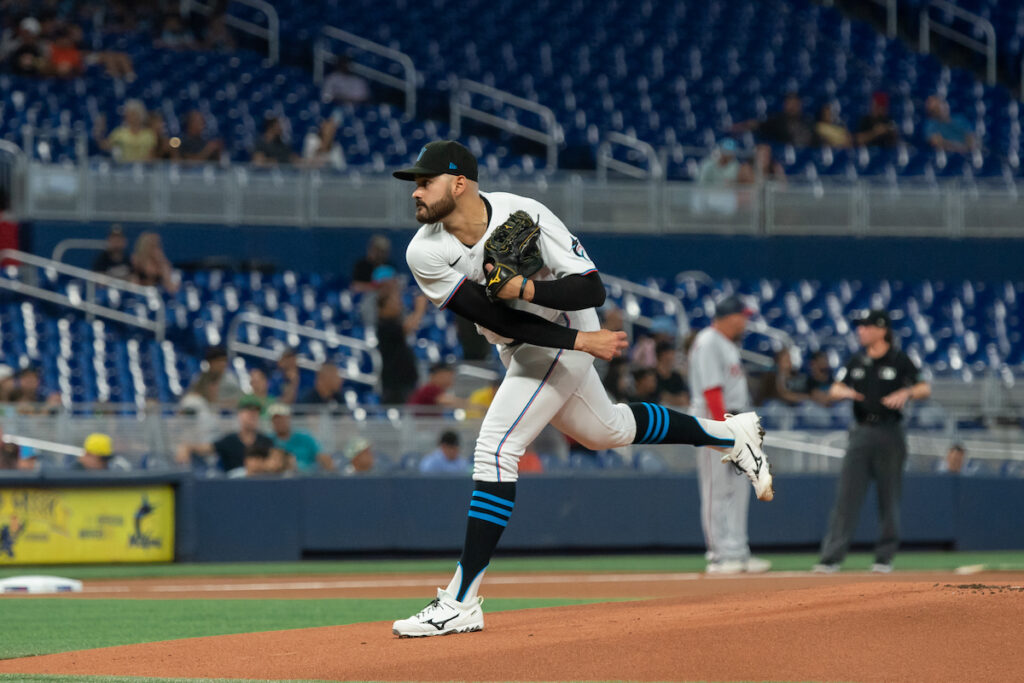 Miami, Florida – Pablo Lopez suffered his worst start of 2022 getting tagged for six runs on 12 hits resulting in a dismal Marlins sweep by the Mets. The NL East leaders chased him off in the third inning after Brandon Nimmo hit an RBI single to make it 6-0. Lopez struck out one batter in his brief stint on the mound. It was the only K the pitching recorded Sunday afternoon. Pache’s stumbling further clouds his future as the trade deadline looms. This rough outing led to the MLB debut of Jake Fishman tossing three and a third allowing one run on four hits.

Jacob Stallings put the team on the board in the fifth with a base hit driving in rookie Charles Leblanc who made his own debut Saturday night. Leblanc crushed his first MLB career homer the following frame, a no-doubter to leftfield inching the Marlins closer 7-3. This was the closest they’d get. New York responded with two runs in the seventh to ensure the sweep. The Mets went 8-for-18 with runners in scoring position. With the win, they own the season series 10-4. Lopez’s performance was a reflection of a bad weekend. It’s their sixth sweep this month. That’s number 11 for the season. The Fish wrap up July going 13-15.

102.2 mph exit velo, 385 feet. It would have been a home run in 23 ballparks.#Marlins pic.twitter.com/FDQGugPigM

Standing at eight games both below .500 and away from the final wildcard spot, the hard truth is the Marlins’ season is all but over. The trade deadline is upon us and it’s time for the club to look towards 2023. The Fish didn’t perform as well as the fans hoped coming out of the all-star break. Blown out by the Texas Rangers, Miami won the series against the Pirates but split with the Reds. The sweep versus the Mets sealed it.

Given their struggles at the plate, it’s clear that the offseason adds of Avisail Garcia, Jorge Soler, and Stallings are failed moves. JJ Bleday is hopefully the answer at centerfield. Then there’s the problem at closer. It also doesn’t help that the list of the injured nearly matches those mentioned as trade prospects. With the odds stacked against the team, it’s time to give the young bloods even more playing time. Of the names being passed around, I’d keep Lopez and Joey Wendle. Everyone else minus the injured Brian Anderson and Jon Berti should be explored.

Plenty of teams are searching for pieces to make a big playoff push. Exploiting this need, the front office should get decent returns. Of course, not everyone will be moved but Garrett Cooper and Jesus Aguilar should be at the top of the list.

Trade pieces are also plentiful in the bullpen. If there are legitimate offers for Anthony Bass, Steven Okert, Dylan Floro, and Tanner Scott the front office should not hesitate. Today’s broadcast showed optimism about some sort of comeback. It’s indeed possible for such miracles, but given the teams ahead of them it’s just not going to happen. As in years past, we are in the player evaluation phase once more.

Marlins down 6-0 to Mets, on verge of being swept and falling 8 under. This isn't a good team. Time to hit reset in year 5 of new ownership and be open to anything non Sandy related by Tuesday trade deadline. You're chronically naive if you try to convince yourself they're close