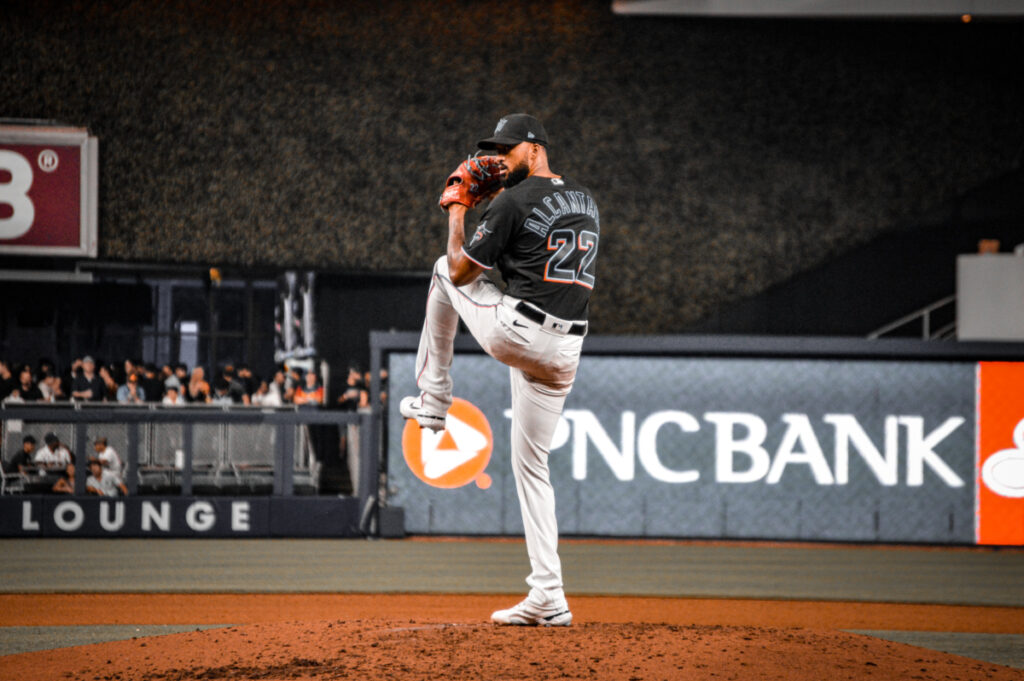 Maimi, FL – The Miami Marlins are closing out the first half of the 2022 season with a three-game series against the Philadelphia Phillies. Miami was in good shape to take the first game of the series with their ace, Sandy Alcantara, on the mound. He has been pitching at a historic level in the first half of this season. He leads Major League Baseball with 130.1 innings pitched and is second in all of baseball with a 1.73 earned run average. The Sandman has been the definition of a workhorse pitching deep into games every time he steps on the mound. He has gone seven or more innings in his last 12 starts in a row.

This is an important series for Miami since Philadelphia is two and a half games ahead in the standings. It is a great opportunity for the Marlins not only to climb in the NL East division but in the Wild Card standings as well. They are only three games out of the final wild-card spot.

Alcantara had one more opportunity before the first half ended to showcase his abilities and solidify himself as the National League starter at the All-Star game. It was Sandy’s Beach Day and there was a supporters section at loanDepot Park ready to hang up the K’s.

Coaches and umpires are meeting and we are minutes away from another Sandy Day!! @Marlins hosting a 3 game series against the @Phillies to close out the first half of the season. Covering games 1 and 2 for @LemonCityLive @Gabewritesports will have the series finale #MakeItMiami pic.twitter.com/JDtZJGvUwh

The Phillies were no match against Alcantara the first time through the lineup. He retired all nine Philadelphia hitters in order and collected four strikeouts along the way. He continued to no-hit the Phillies until the fifth inning with one out.

Sandy Alcantara is on one tonight. pic.twitter.com/oKpcpDgv9z

Former Marlin, J.T. Realmuto, lined a single to right field, but that runner was erased after Bryson Stott grounded into a 3-6-1 double play. Alcantara pitched a scoreless sixth, but Miami’s lack of offense for Sandy came back to bite them.

Sandy Alcantara has faced the minimum through six innings against the Phillies. He has thrown 67 pitches (51 strikes) and recorded nine strikeouts.

Just one hit allowed that was erased by a double play.#Marlins up 1-0.

Alcantara started the top of the seventh by striking out Kyle Schwarber for the third time. Rhys Hoskins was next in the order and he drew the first walk of the game for Philadelphia. It was only the second baserunner Alcantara allowed up to that point.

Miami was not playing a traditional double-play defense with Hoskins on first base and Nick Castellanos up to bat. The South Florida native beat Miami’s shift by singling through the right side of the infield. This gave Philadelphia runners on first and second base with one out. Darick Hall tied the game and almost gave the Phillies the lead with one swing. Hall doubled to left field and Hoskins scored but Castellanos was thrown out at the plate.

Realmuto came through again against his former team with two outs in the inning. He laced a double past Brian Anderson‘s glove down the third baseline and Hall scored easily to give Philadelphia a 2-1 lead. That run ended up being the deciding run.

Sandy returned for the eighth inning and kept the Phillies from adding to their lead. Alcantara sliced through their lineup all night and the seventh inning was the only blemish in his outing. He did everything he could to keep Miami in the game.

Another spectacular performance for the man who's next start should be in the All-Star game ♨️@Marlins | #MakeItMiami pic.twitter.com/pSDo5DUSHU

Alcantara Doesn’t Have Room to Breath

Miami’s offense cracked the scoreboard first off of Philadelphia’s starter, Kyle Gibson. In the bottom of the second, Avisail Garcia led off with a walk and Anderson followed up with a double off the left field wall. Bryan De La Cruz kept a simple approach off Gibson and lifted a ball to center field. The flyout was deep enough to bring in Garcia and Miami took an early 1-0 lead.

Early run support for Alcantara as the Marlins are doing the little things right offensively.

Gibson kept the Marlins offense off balance through his six innings of work. The soft-tossing right-hander had five strikeouts and did not give up a run after De La Cruz’s sac fly. Philadelphia went to their bullpen in the seventh inning and Miami was no match for their late-inning relievers.

Kyle Gibson with six excellent innings for the Phillies. 96 pitches, five strikeouts, four hits, and only one run allowed, but he's currently on the hook for the loss.

First out of the Phillies’ bullpen was Jose Alvarado who struck out the side and was overpowering Miami with his triple-digit fastball. Another former Marlin, Brad Hand, was tasked with the 8th inning. The veteran southpaw followed Alvarado’s lead and pitched a 1-2-3 inning. Things were looking bleak for Miami down to their final chance to at least tie it in the ninth.

The Phillies looked to Seranthony Dominguez to close it out clinging to a 2-1 lead. Dominguez made the final frame very interesting and nerve-racking for Philadelphia fans. Jesus Aguilar led off the inning with a lineout to left field. He dragged out a long at-bat and Miami made Dominguez work on every pitch.

Jorge Soler drew a walk and was pinch-ran for Billy Hamilton. Avisail Garcia had a very patient game at the plate tonight and earned his second walk of the game. The Marlins had runners on first and second with Anderson up to bat and he had already collected two hits on the night. In the middle of his at-bat, Miami successfully pulled off a double steal with Hamilton and Garcia. This gave Miami two runners in scoring position with one out.

Billy Hamilton is the most exciting player on the roster??????

Dominguez loaded the bases by walking Anderson and Don Mattingly went to his bench again. De La Cruz was up in the order but Jesus Sanchez was called upon to pinch hit. Sanchez was unable to make an impact and grounded into a fielder’s choice at second base and the Phillies got the force out at home.

Miguel Rojas was the last hope for Miami but Dominguez settled back in the strike zone after walking three straight Marlins. Rojas struck out to strand the bases loaded and just like that another one of Sandy’s starts was wasted.

Seranthony Dominguez escapes the jam and gets the save!! pic.twitter.com/rDcUy4eOe2

Sandy Alcantara will finish the first half of the season with a 9-4 record. His ERA sits at 1.76 ERA which is second in all of MLB and continues to lead all of baseball with 138.1 innings pitched. It was another outing where Alcantara eclipsed the 100-pitch mark and his control was on point. He threw 106 pitches and 75 were for strikes.

After striking out 12 tonight, this marked the ninth time in his career where he collects 10 or more strikeouts in an outing and the third time this season.  The win snaps a four-game losing streak for Philadelphia and extends their lead over Miami in the division.

Sandy Alcantara speaks after another dominant start to cap his incredible first half 👏@Marlins | #MakeItMiami pic.twitter.com/17PW8BITLH

Tomorrow, all eyes will be on Miami’s number two overall prospect, Max Meyer. He will be making his MLB debut in game two of the series. The 23-year-old was the third overall pick in the 2020 draft out of the University of Minnesota and there has been a lot of buzz around the right-hander. Baseball America, FanGraphs, and ESPN all have Meyer in the top 100 overall prospects.

Meyer might be the shot in the arm Miami needs to make a strong second-half playoff push. He will join a talented rotation that includes Alcantara, Pablo Lopez, former All-Star Trevor Rogers, and Braxton Garrett. The first pitch is at 4:10 pm.