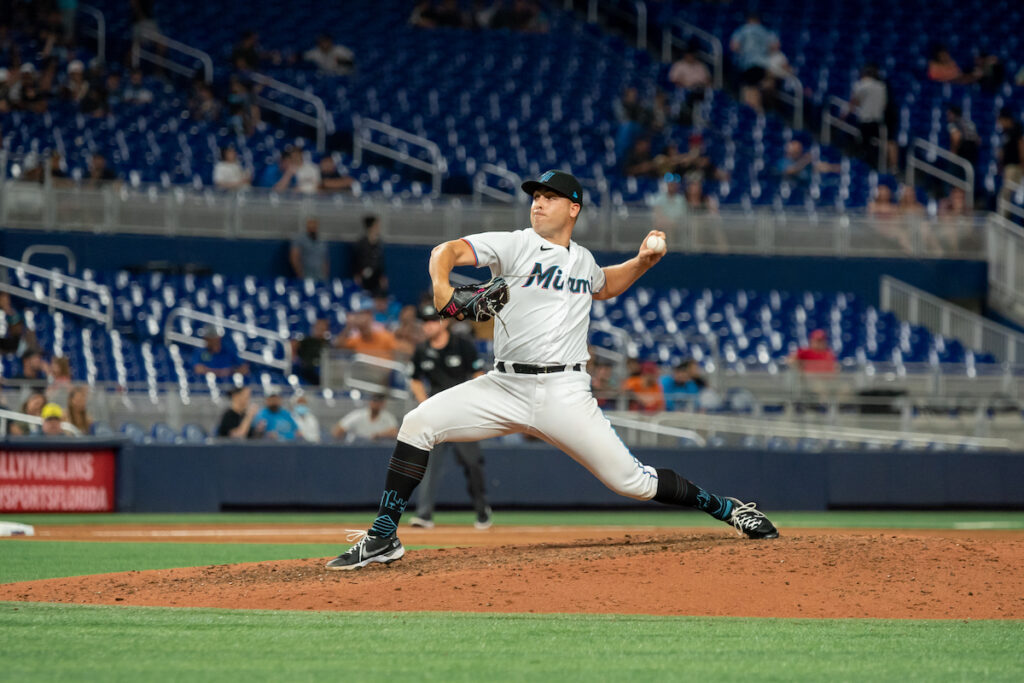 Miami, Florida- There was a lot to cheer about for Miami Marlins fans at loanDepot Park tonight. Although Miami dropped the first game, 5-1, of a four-game series against the Pittsburgh Pirates last night, there was good news to be shared before the first pitch. Before the game, Garrett Cooper was announced as an All-Star, replacing Bryce Harper who is injured.

“All the stars align for that to be in my hometown and to have my family and friends and everyone out there to be the first time out there, it’s pretty wild…there’s a lot of personal accomplishments that you want to do throughout your major league career, and this is definitely one of them… it’s just something that you know, only a little kid could dream about,” said Cooper after heard the news about his selection.

We have three new All-Stars!

They replace Bryce Harper, Yordan Alvarez, and Josh Hader on the roster. pic.twitter.com/asDrfY7UVj

This will give Miami three All-Stars including Jazz Chisholm Jr. and Sandy Alcantara. Miami will have at least three All-Stars going to the midsummer classic for the seventh time in franchise history. The last time this happened was in 2016.

The pregame festivities did not end there. Miami’s catcher, Jacob Stallings, was playing against his former team this week. He spent the last six years with the Pirates and had a breakout year in 2021. He earned the Gold Glove for his position and with his family in attendance, he was finally given the award.

“It’s nice. It’ll be good to kinda close close that chapter officially, but it’ll be really cool. My son’s really excited too, so it’s gonna be fun. My time in Pittsburgh was was great, they gave me my first chance and they drafted me, so it’s obviously all I knew,” said Stallings during pregame interviews.

It is great to see the Marlins get this type of attention and praise but they still had a game to play. All eyes were back on the field and home fans were hoping for a series tie. Daniel Castano started the game on the mound for Miami while Pittsburgh decided to do a bullpen game.

Castano looked sharp early on. Thanks to a double play in the first inning, Castano was able to keep his pitch count low and only had 22 pitches after two innings. It was a scoreless tie going into the third, but the Pirates did not hesitate to change that. Former Marlin, Jake Marisnick, was leading off the inning, and on the first pitch of his at-bat, he launched a solo home run to left field.

Marisnick has been getting payback on his previous employer all series. He recorded his first home run of the season in the previous game, a two-run home run to left field. In 169 plate appearances with Miami, he only hit one home run but has hit four home runs against them.

Miami was able to respond to Marisnick’s home run. Brian Anderson led off the bottom of the third with a single. With one out in the inning, Nick Fortes doubled off the right-field wall and the Marlins had the tying run and go-ahead run in scoring position.

That was the end of the line for Pittsburgh’s opener, Chris Stratton. The Pirates brought in a southpaw and another former Marlin, Dillon Peters. He came in to face Joey Wendle who bats left-handed. Wendle was able to win the lefty-lefty matchup and tie the game up with a sac fly. Peters struck out Jon Berti to limit the damage for Pittsburgh and also pitched a scoreless fourth inning.

All square at 1 after Wendle's sac fly here in the 3rd!

The Pirates were able to get to Castano again the third time through the lineup. In the top of the fifth, Pittsburgh regained the lead with a two-out rally. Diego Castillo led off the inning with a single to left field and then Marisnick and Jack Suwinski flew out. Oneil Cruz got one of the few hits with runners in scoring position and tripled down the right-field line to bring in Castillo. Pittsburgh’s catcher, Jason Delay, kept the rally alive with a single to center field and brought in Cruz to give the Pirates a 3-1 lead.

Castano was able to complete the inning by striking out Kevin Newman but Don Mattingly decided it was time to tap into their bullpen. Miami did respond, however, in the bottom half of the inning with their two-out magic. Miami was able to keep it a close game thanks to two unlikely players.

The bottom of Miami’s lineup was the only spark of offense during the game. With one out in the bottom of the fifth, Anderson reached base with an infield single. He was called out at second base when Miguel Rojas grounded into a fielder’s choice. With two outs, the Marlins’ number nine hitter, Nick Fortes, stepped up to the plate. While Fortes was at bat, Rojas caught Pittsburgh’s defense sleeping and stole his 6th base of the season.

Miguel Rojas is the definition of a smart baserunner.

He manufactured a run there — first with the stolen base, then by running and therefore pulling the third baseman away from where the ball went on Nick Fortes' swing.#Marlins down 3-2.

Going into tonight’s game, Miami led all MLB teams with 70 stolen bases collectively. They continued to use that strength and successfully executed a hit and run with Rojas on second.  Fortes ripped a line drive to left field and thanks to Rojas attempting to steal third, it left a gap between shortstop and third base uncovered. Rojas scored easily and the Marlins were in striking distance only down 3-2.

Haven't checked the official stats, but we're pretty sure Nick Fortes is now hitting .900 with 700 RBI

Fortes continues to mash and drives in the 2nd run for Miami 🔥@Marlins | #MakeItMiami pic.twitter.com/OfSmueUqUT

Castano’s night was over after five innings and the first arm out of Miami’s bullpen was Elieser Hernandez. This is a different role for Hernandez since he has been primarily used as a starter.

It hasn’t gone according to plan in 2022 for Hernandez and at one point he was sent back to Triple-A because of his pitching struggles. He has looked a lot better since he was called back up recently and tonight was another example of that improvement. Hernandez pitched three scoreless innings, gave up only one hit, and struck out three batters. He gave Miami’s offense a chance to at least tie the game.

Fortes also came through defensively in the top of the ninth. With one out and a runner on first base, Fortes fielded a check swing to start a 2-6-3 inning-ending double play. It was an all-around great game for Miami’s backup catcher.

It has been a disappointing start to this series for the Marlins. After a great start in July, the offense has gone flat in the last week. The absence of Jazz and Jorge Soler don’t help with the offensive woes but these are the opponents Miami needs to beat to even out their record.

The 3-2 loss gives Miami their 19th one-run loss of the season. It is an unfortunate stat to lead all of Major League Baseball in and now the Marlins are four games under .500 with a 41-45 record. They don’t have much time to make up ground before the All-Star break, but the focus should be on salvaging and tying up this series against Pittsburgh.