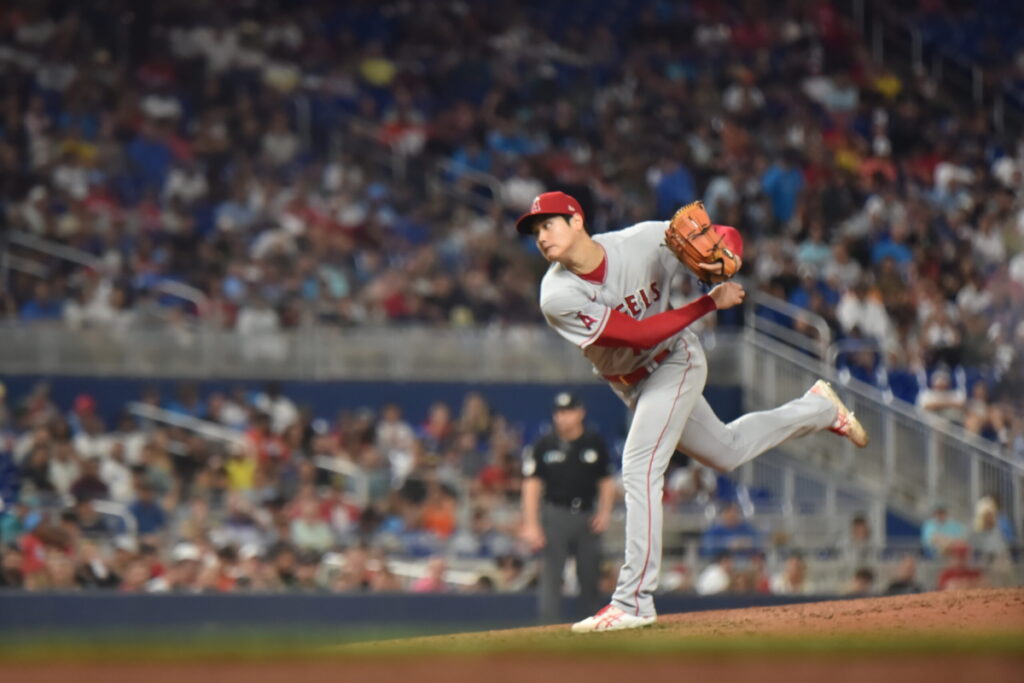 Miami, Florida – Shohei Ohtani, the modern-day Babe Ruth, was in Miami for the first time in his MLB career. It was one of the largest crowds (18,741) at loanDepot Park this season and all eyes were on the mythical two-way player. After the Los Angeles Angels lost last night against the Miami Marlins, they looked to Ohtani on the mound and batting third, for a series split.

The Miami Marlins had a chance to get back to .500 for the first time since May 4th when they were 12-12. It has been constantly mentioned that July will be the most important month for Miami this season and they are off to a great start. They swept the Washington Nationals and took game one last night against the Angels behind another brilliant performance by Sandy Alcantara.

Trevor Rogers started for Miami and looked to win back-to-back decisions for the first time this season. After Alcantara kept the Angels scoreless for eight innings, Rogers continued that streak. The left-hander’s pitches were electric in the first inning and worked a 1-2-3 opening frame. The inning was highlighted by Rogers striking out Mike Trout and Ohtani.

The Marlins were able to get to Ohtani early in the game, In the bottom of the first, Jon Berti led off by reaching on an error and advanced to third on Joey Wendle’s double to right field. Garrett Cooper was next in the lineup and he has been Miami’s hottest hitter over the last month. Cooper stayed simple with his approach and brought in Miami’s first run of the game with a sac fly to deep right field.

Miami had a chance to add more runs early on with Wendle on third base and one out. They had their cleanup man, Jesus Aguilar, up to bat but Ohtani struck him out and Avisail Garcia lined out to end the inning. Miami had to settle for an early 1-0 lead.

Rogers continued to pitch well and kept Miami’s slim lead intact. From the second through the fourth inning, Rogers’ velocity remained in the upper 90s and was starting at-bats with his changeup to keep LA’s hitters in check. He did walk two batters during that time but was able to work around the traffic on the bases. Rogers

Ohtani settled in after the Marlins capitalized on the throwing error in the first inning. He sliced through Miami’s lineup and racked up strikeouts quickly. Miami’s offense looked clueless like many other teams who faced him.

That’s Why He is “Sho-Time” Ohtani

Ohtani was getting better on the mound as the game progressed. He was a headcase for Miami on the mound and he also showed why he’s hitting in the middle of LA’s lineup. Rogers’ night took a halt in the fifth inning. Michael Stefanic led off the inning with an infield single. He was called out on a fielder’s choice by Jared Walsh and Rogers was only one pitch away from getting out it.

The bottom of the Angels’ lineup sparked a rally and took advantage of Rogers’ control issues. Max Stassi doubled after Walsh reached on the fielder’s choice and LA had runners on second and third with one out. Former Marlin, Monte Harrison, kept the line moving after he was hit by a backdoor slider on the leg.

The bases were loaded for another former Marlin, Jonathan Villar. He grounded back to Rogers and Miami got the force out at home but the speedy Villar beat out the throw to first. The bases were still loaded for the three-time MVP, Mike Trout. On a 1-2 count with two outs, Rogers hits Trout and Stassi scored to tie the game 1-1.

Painful RBI for Mike Trout. But still his first RBI on the trip. It's 1-1 in the 5th.

Rogers pitch count was increasing and his leash was getting shorter per pitch. Ohtani was next to bat and he was quiet on offense the game before. He picked a good time to break the tie and provided his own run support. Rogers had Ohtani with a 2-2 count and he placed a 97 mph fastball where Jacob Stallings wanted the pitch. The Japanese slugger is just that good and he took the pitch opposite field for a single. Miami’s shift was beaten by Ohtani and two runs scored to give LA a 3-1 lead.

A Blessing to Watch

Don Mattingly pulled Rogers from the game after Ohtani’s hit. Zach Pop finished the inning and kept the score at 3-1. The two-run Angels lead felt like a six-run lead based on Ohtani’s dominance on the mound. He did not give up a hit after Miguel Rojas’ single in the second inning. At one point in his start, he retired 15 Marlins in a row. Ohtani’s night ended after seven complete innings and 100 pitches thrown. He finished with 10 strikeouts, three walks, no earned runs allowed, and throw in a stolen base.

That’s not too bad a performance after celebrating your birthday the day before.

Shohei Ohtani is the first player since RBI became official in 1920 to do all the following in a single game:

– 10 strikeouts as a pitcher
– 2 RBI as a batter
– a stolen base pic.twitter.com/GXmuoaGptt

The Angels scored two more runs in the seventh inning and Miami’s comeback fell short in the ninth. The Marlins pushed across one run in the last frame and the final score was 5-2. The Marlins win streak has ended after six games but they are still in the Wild Card race. They will look to even their record in an upcoming four-game series at New York against the Mets. That will be the last road trip before the All Star break.

The importance of every game increases as the trade deadline approaches and it won’t be easy against the NL East division leaders. It is refreshing though to see Miami play meaningful games in this part of the season. The ballpark was vibrant for a Wednesday night. Ohtani was a big reason for that. Miami’s average home attendance for Wednesday games this season is 7,950 and that more than doubled when the Angels came to town.

Ohtani is great for Angels fans but he is a blessing for all of Major League Baseball.

Fans in line outside loanDepot park waiting to see Ohtani. He did not disappoint tonight, sad that the @Marlins win streak is over but he’s so important for baseball. @LemonCityLive #MakeItMiami pic.twitter.com/kmGgLqZluj