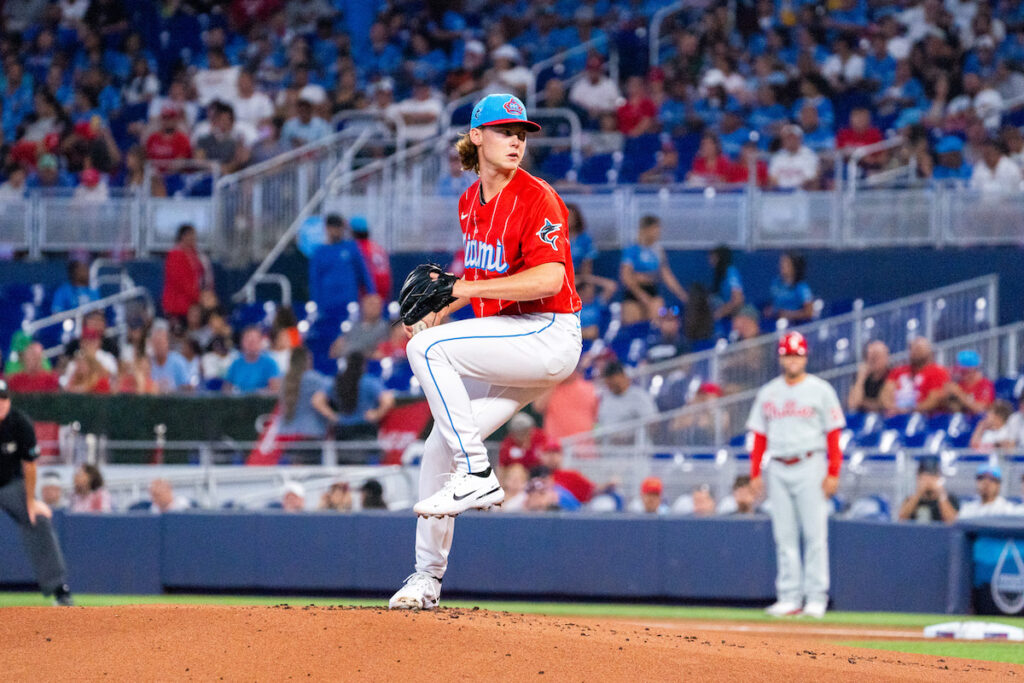 Miami, Florida– There was a lot to look forward to on Saturday night at loanDepot Park as Max Meyer was making his MLB debut. The 2020 No. 3 overall pick had lots of family and friends in attendance and Marlins fans were ready to see the future of this franchise.

It was another legacy Saturday for the Miami Marlins and they looked to tie up the series against the Philadelphia Phillies after dropping game one last night.

Lineups are being delivered and we are minutes away from Max Meter’s MLB debut! @Marlins look to tie up the series against the @Phillies on Nicaraguan heritage night. @LemonCityLive #MakeItMiami #MadMaxDay pic.twitter.com/vQoiHJghfi

Max Meyer did not disappoint the first time through the Phillies order and showcased all his pitches. It didn’t take very long for Meyer to settle in and collect his first big league strikeout. With one out in the first inning, he struck out the second batter of the game, Rhys Hoskins.

Meyer worked out around a two-out double by Nick Castellaños in the opening frame and continued to impress. He pitched a 1-2-3 second inning and picked up his second strikeout in the third inning against Kyle Schwarber. The Phillies were entering their second time through the order and you can tell they adjusted against the young right-hander.

In the fourth, Meyer got Hoskins to ground out and struck out Castellaños to start the inning. Darrick Hall kept the inning alive for Philadelphia with a single up the middle. Next in the order was J.T. Realmuto and he continued to hurt his former team while visiting Miami.

On a 0-1 pitch, Meyer missed his location with a fastball and left it down the middle for Realmuto. He launched the 96mph heater over the left-center field wall and gave the Phillies a 2-0 lead. Bryson Stott doubled after Realmuto’s home run but Meyer got Alec Bohm to ground out to end the rally.

Meyer had a good bounce-back inning in the fifth retiring the Phillies in order but the third time through the lineup proved to be costly for Miami’s No.2 overall prospect. Hoskins led off the sixth inning with a solo home run to straightaway center field on a 1-1 slider. Don Mattingly decided to keep him in the game and work through it.

Meyer walked Castellaños after the home run but struck out Hall for the first out of the inning. It was only fitting that Realmuto ended Meyer’s debut. Philadelphia’s catcher doubled to right center field to put runners on second and third. Mattingly saw enough and went to the bullpen to avoid further damage.

Max Meyer talks about his MLB debut, his first strikeout in the big leagues and what it felt like to have tons of family and friends rooting for him. More post post coverage coming soon from @LemonCityLive #MakeitMiami @Marlins pic.twitter.com/AyW4HKVxA8

Richard Bleier was the first arm out of Miami’s bullpen and inherited two runners on base. He struck out Stott looking for the second out of the sixth but Meyer’s stat line took a hit when Didi Gregorius came up to bat. Miami had a favorable matchup with the southpaw on the mound but Gregorius won the battle with a single up the middle. Castellaños and Realmuto scored and those two runs were charged to Meyer.

The Phillies took a 5-0 lead into the late innings and the game took a sour turn in the eighth. Cody Poteet took over for Miami on the mound and he was making his first appearance since May 25 against Tampa. The Phillies batted around the lineup against Poteet and it looked like batting practice.

Philadelphia had seven hits in the inning and four of those hits were for extra bases. The Phillies doubled their lead in one inning and blew the game wide open. The top of the eighth was highlighted with a two-run shot by Gregorius and a solo home run by Schwarber.

Didi Gregorius finally with his first HR of the season

The 10-0 lead was too much for Miami to overcome. They had six outs to work with but Philadelphia’s bullpen kept Miami hitless and scoreless in the final two innings.

It was a tough way to close out a game where there was lots of excitement and anticipation leading up to the first pitch. Max Meyer showed flashes of brilliance and had moments to learn from. He showed confidence on the mound and threw whichever pitch was called in any count.

He will have plenty of time to look back at his first big league start and see where he can improve. His breaking pitches looked above average but he just needs to work on pitch location. At this level, it is harder to get away with pitches that get a lot of the strike zone. With the All-Star break coming up, he will have almost two weeks until his next start.

The Miami Marlins will close out the first half of the 2022 season tomorrow in the series finale against the Phillies. It has been a disappointing week of baseball for Miami but let’s see if they can salvage this series and end the half with a win. Trevor Rogers will be on the mound for Miami, first pitch is at 1:10 pm.