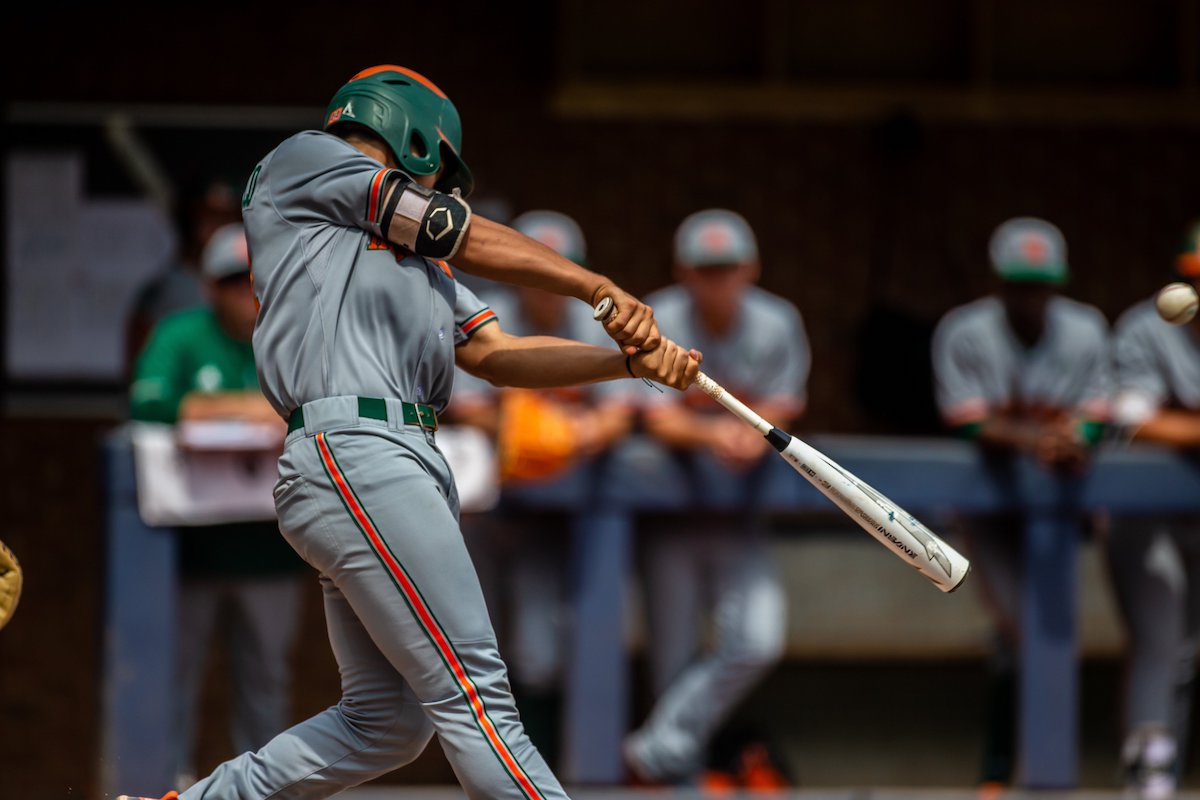 Miami, Florida – Jordan Dubberly made a strong case for a spot in the starting rotation, helping the Miami Hurricanes prevail over the Virginia Cavaliers 4-2. The redshirt sophomore lasted four and two-thirds innings, giving up two runs (one earned) on three hits, fanning four. He did a good job getting ahead of the hitters in his first career start for the Hurricanes. He quickly cruised through the first three frames.  The rubber match saw the two sides seesaw back and forth for the lead.

Through the use of small ball and a bit of power-hitting, the Hurricanes were able to win the series on the road after being swept by Florida State last weekend.

T1 | Jordan Lala swings at the first pitch and reaches on an error by second baseman Max Cotier.

He moves up to second on an errant pickoff by Mike Vasil and Miami has a runner in scoring position! pic.twitter.com/Em7dv6UVBL

The Canes scored in the opening frame, taking advantage of the Cavaliers’ mistakes. Jordan Lala got on base due to a fielding error by UVA second baseman Max Cotier. Lala advanced to second on a throwing error by the pitcher, a pickoff attempt gone awry. Miami employed some small ball to bring their leadoff man home. Anthony Vilar grounded out to move up the runner and Yohandy Morales hit a sacrifice fly deep enough to centerfield to plate his teammate.

Virginia evened up the score in the fourth. With a runner in scoring position, Brendan Rivoli got some payback on Dubberly after whiffing in his first at-bat. Rivoli got a hold of it, ripping a big line-drive for the game-tying RBI single.

Dubberly then gave up a two-out double to Devin Ortiz in the fifth, prompting coach Gino DiMare to go for a pitching change since it was the longest outing by the newly minted starter. Enter Daniel Federman. The former closer began the season on the weekend rotation as the team’s Friday ace but never found his groove. Opposing batters hit .338 against Federman as a starter. He’d run into some trouble in the seventh but otherwise pitched cleanly. Ortiz would score on an error by UM. Dominic Pitelli expertly scooped up Chris Newell’s grounder but the throw was too low for Alex Toral.

B5 | Dubberly leaves after 4.2 strong innings. UVA has a runner on second with two outs and RHP Daniel Federman coming in to pitch for the Canes. Tied at 1. pic.twitter.com/wKxQ6MGFQ2

The Hurricanes answered right back in the sixth with an RBI single from Lala to once again tie it. The speedster would get another chance to add runs the following inning. Raymond Gil hit a sac fly to right field in the seventh, scoring Christian Del Castillo. Afterward, Pitelli singled through the right side to load the bases for Lala. He got on base via the fielder’s choice but unfortunately for the U Toral was out at home. Vilar came up next but popped out to left leaving ’em loaded.

After the seventh-inning stretch, Federman struck out the leadoff man but gave up back-to-back singles. With two runners in scoring position Fed locked it down retiring the next two hitters, snagging Nic Kent’s hard grounder for the toss to first.

Miami stretched their lead further with a solo homer from Morales in the eighth. Canes closer Carson Palmquist took over in the ninth to seal the deal for his seventh save of the season.

Palmquist shuts the door in the ninth for his seventh save and the Canes win, 4-2! pic.twitter.com/6akxyyKn4a

Yohandy Morales contributed through a sacrifice fly ball and a solo homer scoring half of Miami’s runs. He’ll score this one.

Adrian Del Castillo went hitless the entire weekend, not something the coach wants to see from his catcher.