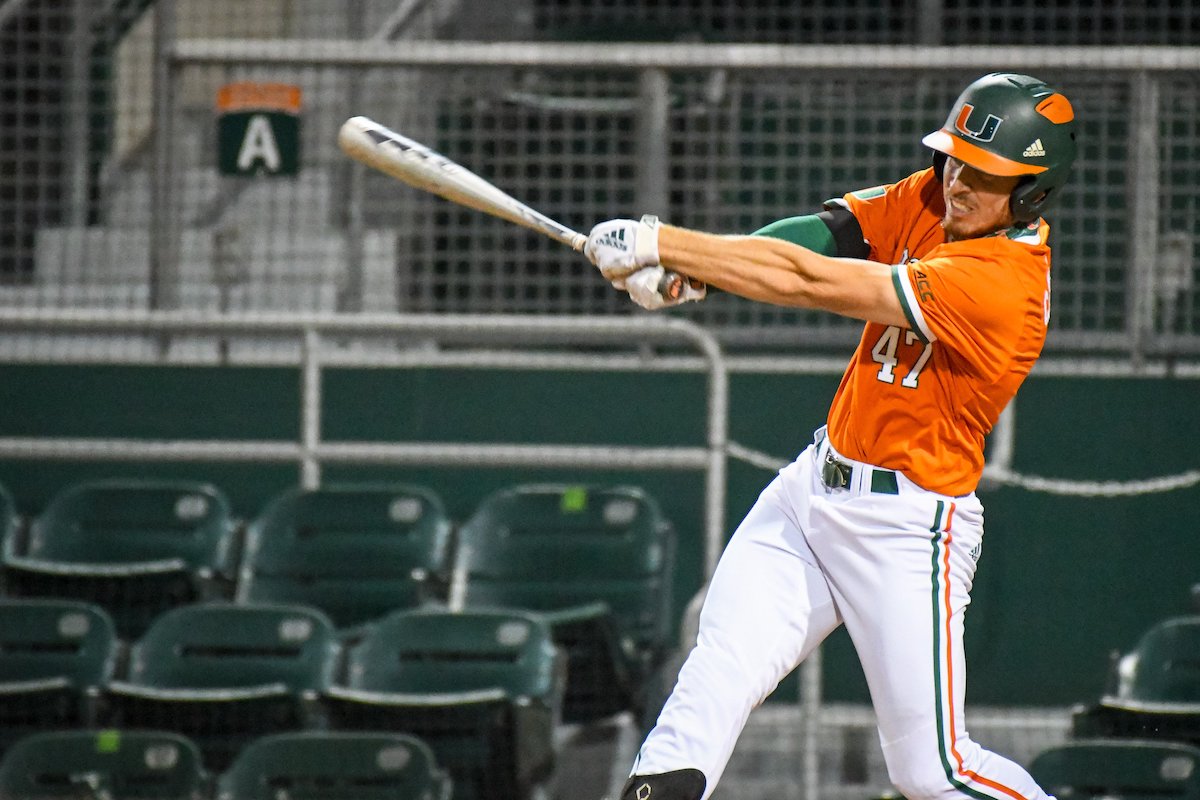 Miami, Florida –It wasn’t easy but the Miami Hurricanes outlasted the Virginia Cavaliers 8-6 Friday. Alejandro Rosario bounced back pitching a quality game. The freshman tossed six innings at Charlottesville, giving up two runs (both earned) on eight hits. Rosario struggled in his last start versus Florida State surrendering eight runs before getting yanked in the second frame.

The righty did not record a strikeout in the series opener, a rarity in this day and age, getting plenty of help on defense. The Hurricanes built themselves a big sixth inning to take and hold the lead in a game that saw 14 walks, 11 from Virginia alone, but they could have scored more. A lot more. It was the tale of two halves for The U.

In the first half of Friday’s game, Miami knew nothing but frustration at the plate recording just one hit in the first five innings. It doesn’t mean they lacked opportunities, however. On four occasions they loaded the bases and failed to score on every one of them. Each time they were turned away as Virginia’s pitching weaved in and out of trouble, backed by their defense. In the first inning, the Canes had three runners on only to see Alex Toral, who hit a grand slam against FAU on Tuesday in his first at-bat, ground out to the pitcher ending the effort.

A similar situation played out in the following frame. Jordan Lala drew his team-leading 16th walk of the year with Anthony Vilar doing the same to again fill those bases. This time it was Yohandy Morales who couldn’t produce the hit, popping out. It wouldn’t be the last time he finds himself in this position although Yoyo eventually made up for it.

Virginia struck first in the second with an RBI double from Christian Hlinka. The Cavaliers got their third hit of the inning, another RBI double courtesy of Max Cotier to make it 2-0. Stringing several hits together, the home team was getting it done.

1-0 HOOS!!! Brendan Rivoli scores from first on an RBI double by Christian Hlinka!

Things got really crazy in the fourth.

Two walks and a hit-by-pitch set up another bases-loaded situation for the Hurricanes. With nobody out Lala was at the dish in a golden opportunity to put runs on the board. Virginia caught a huge break getting a double play, nabbing Gabe Rivera going to third and Raymond Gil at home. Vilar walked again to load the bases but nothing came of it as Morales struck out swinging ending the team’s trip to the plate.

Despite these setbacks, Miami finally broke through in the sixth scoring five runs, their persistence paid off. Rivera started off the rally with a big solo shot to left field putting them on the scoreboard. Dominic Pitelli then scored on a fielder’s choice after safely reaching first due to a throwing error by the shortstop Nic Kent. He had made his way to third on a wild pitch. In yet another bases-loaded scenario, the Canes finally produced with a hit up the middle from Christian Del Castillo, plating two. In a stroke of luck going their way, Toral’s pop fly was lost in the sun adding another run to make it 5-2.

An inside the park home run for Zack Gelof! The Hoos go back-to-back and cut the deficit to 5-4 in the B7! #GoHoos

UVA made things interesting after the seventh-inning stretch. Kyle Teel demolished the ball over the right-field fence for the two-out solo blast. Zack Gelof followed up with a deep hit to centerfield as Tony Jenkins couldn’t make the catch, tripping on the warning track. Gelof turned on the afterburners resulting in an inside the park home run.

UM responded with three in the eighth including a solo dinger from Morales to lead off the inning and an RBI single via Gil. The Cavaliers did not quit, adding a run in the last two innings. Devin Ortiz homered and Brendan Rivoli singled through the right side bringing in the runner. Carson Palmquist, who had been pitching in relief since the seventh inning, shut down the rally to preserve the hard-earned lead. Miami’s closer fanned three straight hitters after Rivoli’s RBI single to ice it. It’s his sixth save of the season.

Anthony Vilar led the team in walks today with four

Yohandy Morales: 1-for-6 with 2 runs, 2 RBIs, and a homer. He whiffed twice and stranded six runners in his at-bats.

This one goes to Alejandro Rosario. The freshman righty’s performance was a nice rebound from last weekend’s debacle. He ran into trouble here and there against Virginia but he kept on fighting.

Anthony Arguelles had a pretty short outing in relief. He faced four batters and gave up a pair of runs before coach Gino DiMare pulled the plug in favor of Palmquist.