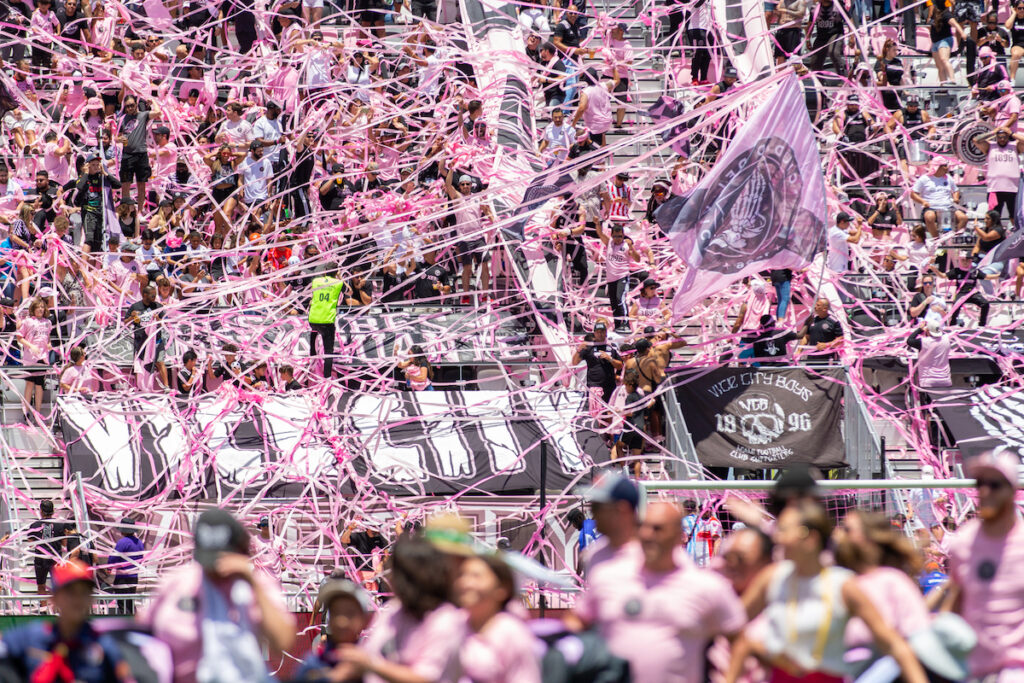 Fort Lauderdale, FL – Inter Miami CF outshined Atlanta United on a sunny Sunday afternoon, getting a 2-1 win at DRV Pink Stadium. A vibrant crowd of 13,433 witnessed the visiting United dominate the statistical battle but lose the game. The victory was a club record 4th straight for the Herons, three MLS matches, and a US Open Cup win over crosstown rival Miami FC.

Miami had one change in the starting lineup from their previous MLS match against the Seattle Sounders. Mo Adams started in place of Gregore who was out due to an accumulation of yellow cards.  Miami began the game with their customary 4-3-3 formation, with Jean Mota surprisingly playing the pivot in place of Gregore. Robert Taylor and Mo Adams were flanked at his sides.

A risky challenge in the box by Damion Lowe at the 6’ mark of the game was close to being a penalty. Luckily, referee Jair Marrufo continued play without incident. Atlanta United got on the board first with a corner kick during the 13’, with Ronaldo Cisneros getting the goal after a couple of deflections. Early in the game, Atlanta controlled possession, and the Herons played the counter. DeAndre Yedlin nutmegged Andrew Gutman and played a threatening cross for Campana, but the ball was deflected for the corner kick at 21’. Just minutes later, Yedlin again made a wonderful cross into the box, and this time Leonardo Campana equalized for the Herons with an outstanding show of skill where he brought the ball down brilliantly, turned on a dime and rifled a left-footed shot into the corner of the United goal. This was really a golazo!! The rest of the first half continued to be dominated by Atlanta, but the teams went into halftime tied 1-1.

This is the Campana 🔔 golazo I was talking about @LeoCampana9 @InterMiamiCF @LemonCityLive … makes it look simple but it isn’t ⭐️ https://t.co/Y72cVac2hX

Not much changed in the second half, Atlanta had possession and the Herons countered. United built up several threatening attack sequences but just could not put the ball in the goal. Phil Neville made a pair of substitutions at the 56’ mark bringing on Noah Allen for Robbie Robinson and Bryce Duke for Mo Adams. The youngsters provided a spark for the Herons off the bench.  Duke intercepted a pass in the midfield and immediately played it to Ariel Lassiter, who pushed the ball up near the Atlanta box rapidly, Lassiter then made a pass out wide to Campana whose first touch took him into the box directly in front of Atlanta goalkeeper Bobby Shuttleworth. Campana had the opportunity to shoot on goal and possibly get a brace for the game, but instead, he unselfishly made the smart pass to Duke who was all alone for the tap-in. The assist by Leonardo was just as brilliant as the golazo he scored in the first half. A striker with Campana’s killer instinct along with the wonderful vision to find better-positioned teammates is worth his weight in gold. We are witnessing the rise of a young star.

Wonderful team goal by #InterMiamiCF .. Campana 🔔 had the chance for the brace, but instead makes the unselfish pass to a better positioned Duke 🤴 gotta love ❤️ a striker that has a killer instinct along with great vision @LeoCampana9 https://t.co/KRPIHYrRtj

Neville made three more substitutions to try and ice the game. Emerson Rodriguez came on for Robert Taylor at 75’, and Victor Ulloa and Gonzalo Higuain came on respectively for Lassiter and Campana at the 82’ mark. Noah Allen got away with a possible penalty at 79’. Marrufo checked VAR but decided not to award the penalty. Boos rang down from the crowd as Higuain was about to enter the game, but a gallant Campana gestured to the fans to refrain. The rising star coming off for the fallen one. The Herons held on for the final 2-1 score and continued their improbable winning streak.

Phil Neville and Bryce Duke spoke at the postgame press conference with reporters. Neville began by saying he was proud of the week the players and the team have had. Inter Miami defeated the Seattle Sounders on the west coast on Saturday night and then turned around to get a victory against Miami FC Tuesday night. Sunday afternoon had the Herons take a 2-1 win from Atlanta United at DRV Pink Stadium. Two of the three matches were away from their home stadium. This is no small feat. Perhaps the most successful week of this young team’s history. Despite all the success on the pitch, the coach is aware that there is much to improve on the team’s  performance,

On paper, the Herons were outplayed and should have lost this game, but the reality is that only the scoreboard matters. Atlanta had more shots, shots on goal, corners taken and time of possession than Miami. Goalie Nick Marsman had six saves in the game in comparison to zero by Bobby Shuttleworth. Therein lies the difference, Miami has been efficient during its current win streak making their opportunities count.

The Herons are winning ugly, but they are winning. There are many flaws with this team, but the unit is becoming more cohesive and some players are starting to raise their level of play. The mental and emotional aspect of the game is paramount, and it seems that Neville and his boys are creating a culture of a tough never-quit-squad.

The “cheeky chappie” Bryce Duke provided some insight into his performance after the game. Duke told us that Campana said he was going to shoot on goal and at the last minute saw him open and gave the assist for his goal. Duke is no-nonsense in regards to his view on the outcome of games,

“ In the end the only thing that matters is that the team gets the result.”

The end justifies the means, in pro sports too. The Herons are not displaying dazzling fútbol on the pitch, but they are scoring pretty goals and winning games. Bryce was asked about what has changed for this team on its current winning streak,

Bryce Duke’s answer to my question..the kid is improving and gaining confidence each game, just like this young #InterMiamiCF team..@LemonCityLive @InterMiamiCF https://t.co/WvHf4dZrIa

It’s as simple as that. Miami beat Atlanta because they scored a couple of goals on very few opportunities, while Atlanta had many more opportunities and scored only once. That is the great value of a striker that scores and has the vision to facilitate scoring opportunities for others.

Inter Miami CF is making a remarkable turn of its season with a historic four-game win streak. What is remarkable to me is that the team is still not playing great fútbol and is obtaining results. Honestly, Atlanta did not deserve to lose that game and came very close to scoring several goals but just couldn’t put the ball away. To be fair, Inter Miami lost some games at the start of the campaign with some unlucky bounces of the ball while playing well. These things seem to cancel themselves out, and in the end, the squad’s true capabilities prevail.

The Herons were lucky Jair Marrufo did not call two penalties on plays that were close enough to be penalties. I value the team’s growing confidence and determination in fighting through games to get wins. This is part of the foundation being set, and part of the identity Neville says the team is finding.

Bryce Duke and Noah Allen came into the game at a complicated moment for Miami. Atlanta had control and was pushing for the tying score. The youthful players held their own and contributed greatly to the team’s triumph. Allen had some issues on defense and could have been called for a penalty, but none of that stopped him from motoring forward, scratching and clawing until the end. It’s commendable and encouraging to see the teenage defender developing while he continues to play meaningful minutes. Neville has placed great trust in Allen, and he is responding. Duke came on for Mo Adams and immediately influenced the game. This is what a young budding star is supposed to do. Duke needs to continue to be consistent with his level of play, and he will at some point find his way into the starting lineup. His goal was great in part because of his vision and awareness on the pitch, he found Lassiter with the pass and then outpaced defenders into a space in the box that gave Campana the option to shoot or pass. Campana made the correct decision and Duke tapped in the game-winner. This was possible because of Duke’s initiation and finish of the play. Good stuff from the young midfielder.

Involved in 6 of @InterMiamiCF's 8 goals to start the season. 🔥 pic.twitter.com/JQaMEMJP6Y

Phil Neville is also emerging before our eyes. He read the game early and brought on Allen and Duke. In previous games, the coach has waited deep into the second half before making changes. He’s also shown that he is the man in charge by benching Higuain and placing Mota at the pivot when it would seem more likely that Adams play there. Neville’s intuition paid off as Mota had a masterful performance defending and passing out to his teammates. Just as the team is gaining confidence and putting together positive results, so is Neville. The season is long and we’ll continue to monitor both Neville’s and the squad’s performance.

Finally, Gonzalo Higuain was available to play for the team after missing time with a knee injury. Higuain heard a chorus of boos as he was about to check in to the match. That was a clear example of the disconnect between the fans and the team’s DP player. The crowd was voicing its obvious displeasure with Higuain so far this season, for his lack of hustle and at times edgy demeanor. Miami is a tough sports town, fans are often very casual and only show up when teams are winning. When I say this, I’m generalizing and not speaking about the true die-hard fans of all our professional teams. Higuain has an opportunity to redeem himself with the fanbase, but it won’t be easy. He must demonstrate a true desire to leave everything he has on the pitch, and get closer to the community. It would be nice to see Gonzalo taking part in team community functions, to see his human side outside of fútbol. I don’t know if that will ever happen, but it would be nice. Now the best way Higuain can redeem himself is by performing like a star on the pitch for this team like he is paid to do. Then the boos will turn to cheers.