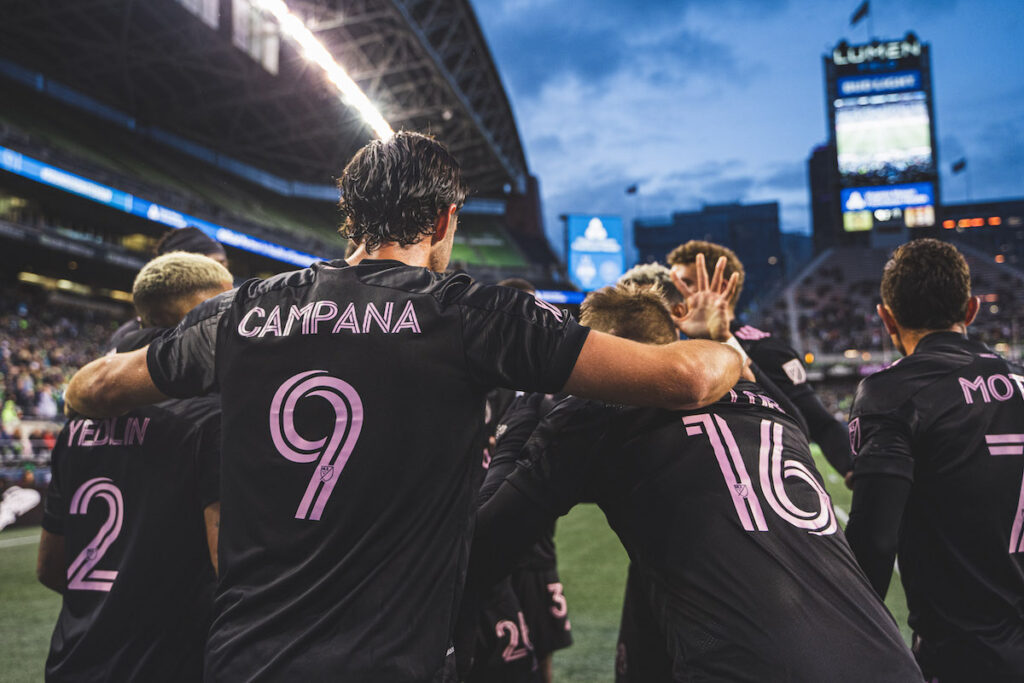 Seattle, WA – The suddenly streaking Inter Miami CF grinded out a 1-0 win against the Seattle Sounders at Lumen Field on Saturday night. It was the second win in a row for the Herons, who brought home a monumental three points.

The matchup was the first-ever between the two squads, and it produced many firsts for the team. The game included Miami’s first clean sheet away from DRV Pink Stadium this season, and it was the Herons first-ever win outside of the eastern time zone. Robbie Robinson bagged his first goal of the campaign, and DeAndre Yedlin marked his first assist of the season. Yedlin also was the Sounders first-ever Homegrown Player.

On defense, Mabika and Lowe lined up out wide in the box, while the full-backs pushed up high on the sidelines. Seattle’s high pressure caused havoc and the Herons were never able to really play with possession.  At the 21’ Lowe had another errant pass when he tried to force the ball into Gregore, but again the Herons were able to extinguish the fire.

Chris Mcvey is called for a foul at the 24’ in the Sounders box while simultaneously Jean Mota is fouled for an apparent penalty. From my perspective, the call on Mcvey was a phantom foul call by the referee in order to bail himself out of having to call a penalty on the home team.

Finally, the breakthrough in the 41’ when Robbie Robinson scores off a cross from Yedlin. The shot appeared to glance off the Seattle defender as it went into the corner of the Seattle net. Robinson finally got rewarded for his efforts.

The first half was not pleasing to the eyes, as neither team did anything brilliant. The most important part is that with a gritty effort from the Herons ended the half with them on top 1-0.

The Rave Green made five substitutions during the second half in an attempt to alter the outcome of the game. Miami brought on Duke, Allen and Adams to counter Seattle’s moves. For the entirety of the half, the Sounders were on the attack, and the Herons defended their lead with great resolve. Seattle had a flurry of shots and attacks on goal, but none would find the back of the net. The game ends 1-0 for Miami, who brings the points home and starts a winning streak at two in a row.

After a long trip and a hard-fought victory, a visibly tired but upbeat Phil Neville addressed the media,

“We’re really happy, proud of the players to come to a place like Seattle with great history, and such a tough place to come and really grind out an away performance.’

Grind really was the proper word to describe the effort of this squad. There was nothing pretty about the performance, but it was effective. This type of game builds character and resilience. The younger players like Mabika, Duke, and Allen who took part in the victory are further along in their development today because they won that game in Seattle.

The Herons are still a team seeking to find their identity, but coach Phil Neville has always had a clear picture of what he wants his team to be.

One can’t help but think about Gonzalo Higuain when the coach makes a statement like that. Since Higuain’s absence from the team, they have won two very important games in a row. The team has looked more cohesive, and the young talented players have looked more confident and aggressive. When the Argentine returns from injury he will have to adjust to this new culture the team has embraced.

Robbie Robinson scored his first goal of the season for the Herons, and he was glad it finally happened in order to,

“Get the first one out of the way, and get it rolling.”

If Robinson gets rolling, along with Campana, Lassiter, Mota, Taylor, and Duke, the Herons would become an interesting team. At this point, that’s asking a lot from a group that has so far not shown much on the attack. The untapped potential and ability are there, and a player like Robinson could possibly get rolling after finally seeing the ball go into the back of the net.

The win was important for Miami, but Robinson sees the big picture and feels that more importantly, the team is improving in key areas,

“It goes beyond the three points, we’re starting to look better and more compact as a team.”

During this campaign, Inter Miami has struggled to stay compact on defense and to be cohesive on the attack. Saturday’s game showed a strong compact team, although the attack only had sporadic moments of quality play.

DeAndre Yedlin, the Seattle native spoke about how critical the victory was for the confidence of the team moving forward.

"I'm excited to be back."@yedlinny reflects on his return home to Seattle. pic.twitter.com/sb630U6hZI

“Now we have that confidence to know we can grind out those wins, know we can defend well when we need to.”

A win like this not only builds confidence but develops trust in the younger players by the veterans. That confidence and trust can only be built between the players when they are able to pull wins like these together in the trenches.

Yedlin talked about how the team is maturing and learning to win complicated games like the one on Saturday against a very tough Sounders team,

“Before, probably in the beginning of the season, we would have given up a late goal …”

Slowly Miami is coming together as a team and getting closer to the identity coach Neville has envisioned for them.

Phil Neville has made his expectations abundantly clear to his players and fans. Neville expects a team that is consistent and works hard to reach a common goal. According to the coach, players that do not align with those values will find it hard to play on this team.

The last two weeks have shown an Inter Miami squad that has been willing to fight until the end as a team. Players are flying around the pitch at a high intensity defending and attacking. Gonzalo Higuain and several other players will be returning from injuries and will need to be on the same frequency in order to get minutes, at least that’s what Neville has said. I’m looking forward to seeing the team dynamics when all the players are fully healthy and available. Will the coach stay true to his word, and will the returning players buy into the emerging team identity?

DeAndre Yedlin's assist to Robbie Robinson is the difference in Seattle. pic.twitter.com/pPyW3mn35H

The Herons have won back-to-back games against two of the better teams in the league. Despite the narrative that neither team was at full strength, wins are hard to come by in professional sports. Next person up is the attitude every team has, and Miami does not need to apologize for winning games. A victory at home on Sunday against Atlanta United will continue to provide both the team and the fanbase confidence.

“We will need Gonzalo,” said Phil Neville during the postgame press conference Saturday night. I agree with him. Gonzalo provides quality, experience and a presence no other player on the team has. I don’t believe he deserves to start again unless he outplays Campana, but I do believe he could come in as a super-sub and make things happen. Hopefully, he returns in better shape and with a better attitude.