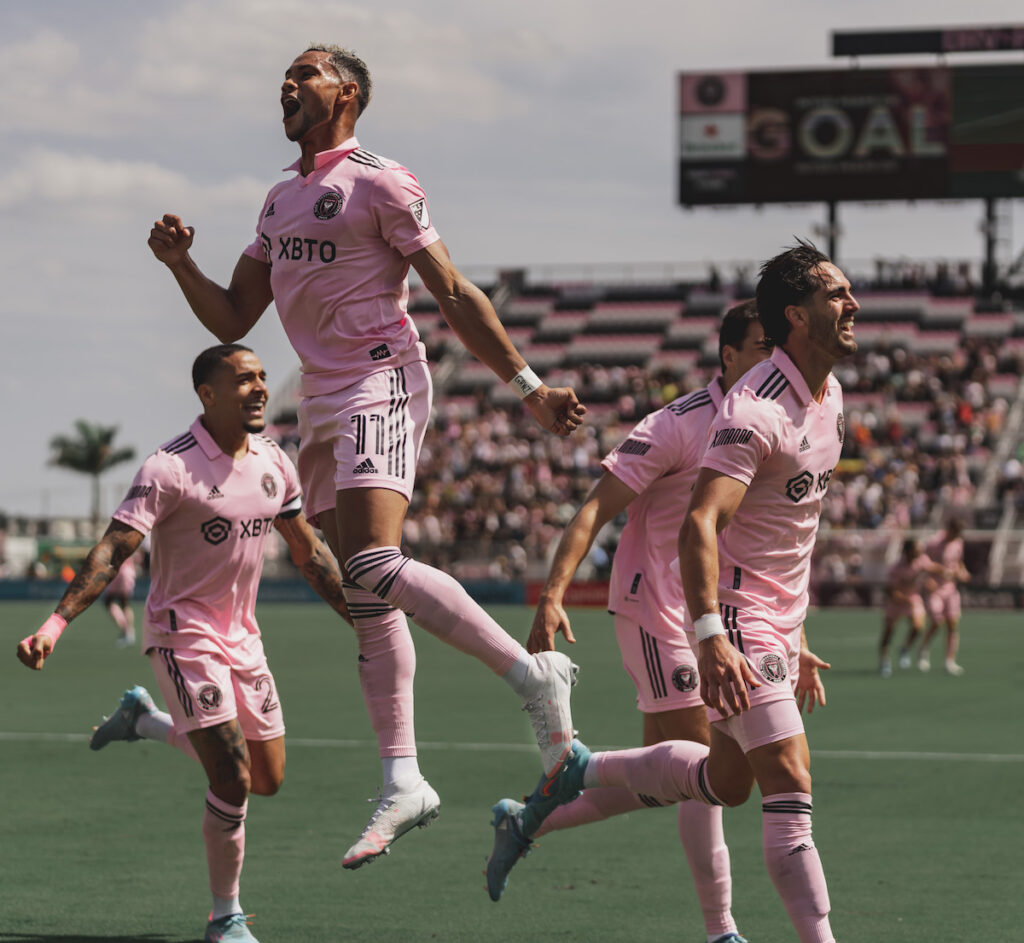 Fort Lauderdale, FL – Inter Miami CF earned a thrilling 3-2 win over the New England Revolution Saturday afternoon at DRV Pink Stadium. The victory was Inter Miami’s first of the season, and it came at a most opportune time as the Herons had an 0-4-1 record coming in, sitting at the bottom of the Eastern Conference desperately in need of points. Once again Phil Neville made adjustments to his starting lineup, inserting Aimé Mabika at center back and sliding Chris Mcvey out to left-back. Leonardo Campana started at center forward in the 4-3-3 formation in place of Gonzalo Higuain who missed the match due to a knee injury suffered in practice.

Early on in the game, the team speed was evident up top with Robinson, Campana & Lassiter moving in unison causing trouble for the NE defense. Near the 3’ Ariel Lassiter was fouled just outside the Revolution’s box leading to a Jean Mota free kick that hit the crossbar. The Revs get on the board at the 11’ with Justin Rennicks putting a Dejuan Jones cross into the back of the net. Once again Miami gives up an early goal in a match.

Leonardo Campana bags the equalizer at the 17’ with a potent header off an Ariel Lassiter cross. Lassiter and Robinson caused havoc on the wings for the Herons, and the team reacted quickly tying the game. Just a few minutes later Campana again finds the back of the net with a left-footed blast. The counterattack led by Robbie Robinson and Gregore was a thing of beauty, with Robinson getting the assist on the cross.

23' | CAMPANA!! What a build up, a great cross from Robinson and Campana makes its 2-1 at #DRVPNKStadium ! pic.twitter.com/RYKF93s1qF

The first half is the team’s best half of the season thus far, nice and compact on defense and speedy and purposeful on the counters. Lassiter on the right wing and Robinson on the left was dangerous with both wingers providing assists to Campana. This is what the 4-3-3  is designed to do. This is what a ruthless forward looks like.

A penalty was called on a challenge by Lowe in the box in the 64’ that led to the Carles Gil score and a 2-2 tie. There was contact on the play but in my eyes not enough to merit a penalty and reward a NE squad that had possession but was unable to break through the Heron defense. Noah Allen comes on for Ariel Lassiter in the 72′ and Neville switches the formation to a 3-5-2. The Revolution took control of the action in the game after the penalty score and the IMCF coach took measures to solidify his defense.

Bryce Duke makes his first appearance for the Herons this season coming on for Robert Taylor who had a good game. Coach Neville gambled a bit here by leaving Mota in the match with a yellow card. His gamble would soon pay off as Mota continued to play well, and Duke would make a crucial play down the stretch.

Emerson Rodriguez came on for Robbie Robinson in the 85’. Robinson has had two consecutive matches where he has looked sharp on the wing. He played loose, confident and aggressive against the Revolution. Finally in the 87′ the Herons break the deadlock when Leandro Campana finishes off the first-ever hat trick for Miami, tapping in a deflected ball that was served in by Bryce Duke. Duke made a run deep into the NE box displaying some slippery moves.

89' | Campana with the HAT TRICK! #InterMiamiCF take the lead at #DRVPNKStadium 🤩 #MIAvNE | 3-2 pic.twitter.com/oD0KDGQeGP

The Herons were desperate for a win and they finally got one.

In a no excuses game for the Herons, the team came out loose and confident, playing freely all across the pitch. The pressure of needing an urgent result was not apparent Saturday afternoon. Neville stated that Saturday’s game was more of an indicator of what they are trying to build as a team.

“What you saw today was a reflection of what we are trying to build.”

IMCF has many young players on the roster mixed in with experienced players in key positions. The team has not performed up to expectations so far and the players along with the coach have received heavy criticism. Neville believes that the rough start to the season is not a true barometer of this team or of him as a coach.

The win against NE provided a “ glimpse “ of what the team can do according to Neville. He said IMCF was,

It begs the question, is Gonzalo Higuain’s absence the main reason that the Herons played their best game of the season thus far? Does his presence on the pitch cause tension among the players? The “Man of the Match” Leonardo Campana was excited and gave us insight into the team’s focus coming into the match against the NE Revolution.

In pro sports, the end justifies the means. Results are how players and coaches are measured. Miami got the needed three points at home against NE, and the team did it in an exciting fun fashion on Saturday. That was the cherry on top. Campana was asked if his stellar game on Saturday would lead to a starting role moving forward in the season. His answer was measured and prudent,

“The coach makes that decision, I am here to work.”

The young striker’s humility and attitude are important characteristics for a player with great ambitions and the skillset to reach his lofty goals. Near the end of his interview, Campana showed raw emotion getting teary-eyed when asked about his family being present at the game.

“I’ve suffered the last two years, they have been very difficult for me..the truth is the family is always there for you, and I’m very grateful for them.”

The Herons have suffered as a club since its inception. The progression of young talented players like Campana will be key in turning the constant losing into sustained winning for the club.

Saturday’s outcome against NE was a much-needed win for the Herons. The pressure was on the players to perform and on the coach to get a result. Neville had been actively working to find his best lineup and had tinkered, especially in the last two matches.

Mabika at center back and Campana at center forward added physicality right down the spine of the team’s formation. Mabika had a strong game, and Campana had an amazing performance. Mabika is 23 years old, Campana 21, and just like them, the team has several very talented players under the age of 25. This bodes well for the future of this team, a solid foundation is being built. The fans are more interested in the here and now.

I’ve mentioned previously my belief that this team was more talented than what the results have demonstrated. It’s not time to get carried away with a home win against another bottom dweller squad, but there were signs that better days could be ahead. Let’s revisit the team’s progress at the halfway point of the season.

From the start of the game, IMCF showed a faster, more compact team, with a center forward that defended with more energy and will. The transition from defense to attack was also much smoother. Lassiter and Robinson continue to play at high levels, each delivering an assist to Campana. The speedy wingers allowed Leonardo to find space in the box because they forced the center of New England’s defense to venture out wide to cover their teammates back on the dangerous 1v1 plays.

DeAndre Yedlin is a pitbull on defense constantly winning challenges from anyone on his side of the pitch. Despite being the smallest of the starting defenders, Yedlin is uber aggressive.

Gregore had his best game of the season against the Revolution. He covered a lot of ground defending and attacking on Saturday. He still is not up to the form that led to him being named the captain. Gregore needs to continue to be a strong defender as the pivot, but must also make better decisions with the ball at his feet. He tends to hold on to the ball too long and dribbles himself into trouble, but he had a strong game.

Bryce Duke is an interesting player. Duke has technical ability, and is fast and aggressive on the dribble. His run into the box led to Campana’s game-winning tap-in. Another weapon for Neville on this increasingly deep team.

At least for a week, the heat on Neville cools off just a little bit. The coach hit on his lineup changes and changed tactics late in the game to neutralize Bruce Arena’s formation shift. The win lifts a heavy burden off his shoulders for a few days.

Gonzalo Higuain was not present on the pitch and the Herons played their best game of the season. It would be easy to say that he should just remain on the bench for the rest of the campaign. That’s not fair to him or this team. I have seen the gloomy body language and negative gestures toward teammates too. The MLS is professional fútbol, not recreational. It’s ok for leaders to demand more from players and if necessary curse them out. Now, that being said, it’s also fine to bench your highest-paid player if a younger player is outperforming him.

In my previous article, I put forth the idea of Gonzalo as a super-sub, a player who can be brought in to be a difference-maker when needed. I still believe that could be his best role as he is phased out of this team’s future. His experience and quality are valuable right now, if this squad is to do anything during the current campaign Gonzalo will be a part of it.

A win was needed and the Herons delivered without Higuain, it’s going to be very interesting to see how Neville manages the situation when Gonzalo is fit to play again.