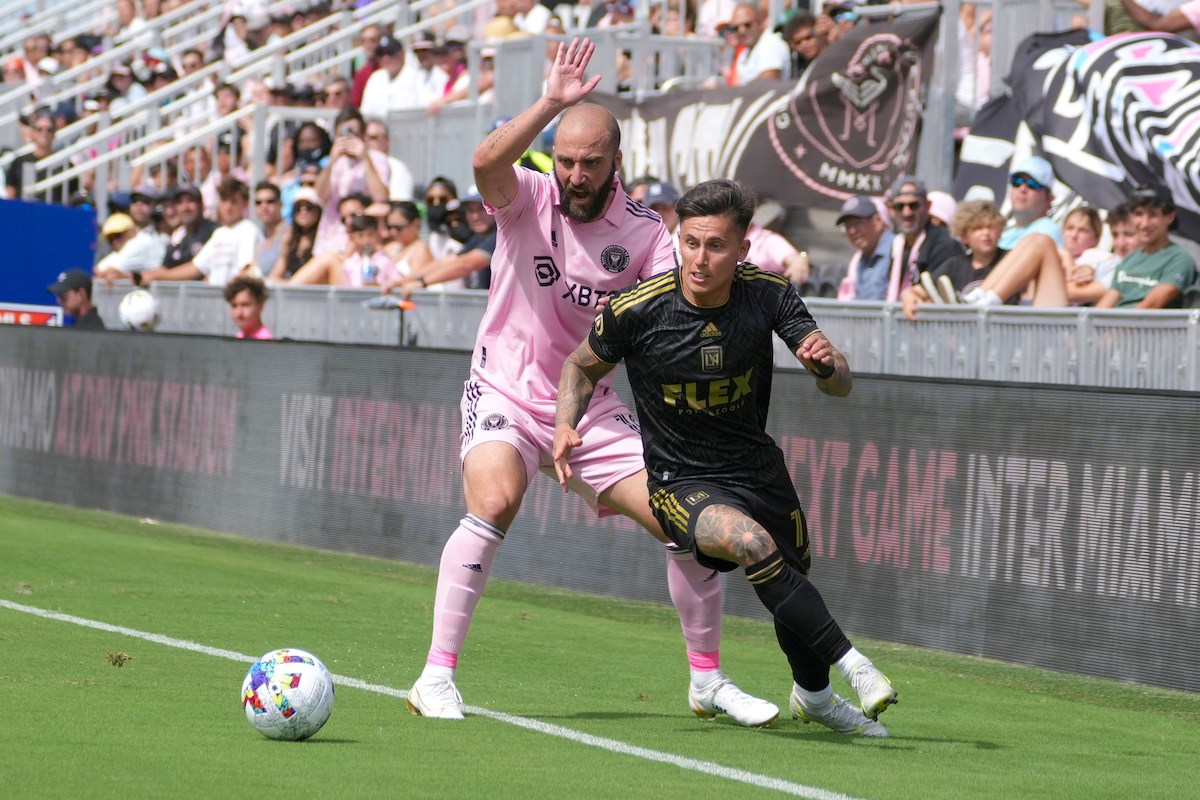 The Herons began the game fast and furious against LAFC, unlike the previous two games where Inter Miami was lifeless and dull in the first 30’ minutes. Miami pressured aggressively, challenging every ball from the backline of LA.

The early parts of the game saw the Herons try to build play on the right side with Yedlin and Mota. A quick switch of the ball to the left side of the pitch ended with a foul on Brek Shea just outside LA’s box. Gonzalo Higuain once again had a mediocre cross on the set play, and couldn’t prevent the ball from going out of the sideline when it was headed back towards his direction.

Gregore initiated a dangerous counter through the middle near the 15’ mark but was tactically fouled by Ilie who received a yellow card. Near the 17’ Mota had a shot on goal fly high over the crossbar after some nifty maneuvering by Taylor left him open for a strike.

Mo Adams was a lion in the midfield for Inter Miami CF, almost stealing a ball near the LA box in the 18’. Adams and center-back Damion Lowe were difference-makers today for Miami providing a strong defensive presence for the team. Lowe, the Kingston, Jamaica native is the king of the Herons backline. He made his presence felt throughout the whole game and provided muscle and speed for the Miami side. Lowe and Mcvey gave Inter Miami a strong center-back pairing, working well together.

At the 34’ Damion Lowe breaks away near the right line and pushes up near the LA 18 yard line sending an ineffective cross into the box. Lowe had a very good half along with Adams and Mota. Lowe and Adams put out the fires defensively for the team. Captains Gregore and Higuain did not offer much on the pitch.

Jean Mota fired a left-footed strike in the 39’ which the LA goalie Crepeau pushed over the crossbar. Mota is another player that hustled both while attacking and when defending.

🧰 Today's Save of the Match presented by FLEX Power Tools.

Throughout the season, FLEX Power Tools will be donating one hundred dollars to @Habitat_org for each save made by an #LAFC goalkeeper. pic.twitter.com/8zRUVNUTfY

A deflected ball on an LAFC attack falls perfectly for Kwadwo Opoku who then curls a shot past Diop in the 45’. Merely a few minutes later, Brek Shea is shown the red card for a foul on Brian Rodriguez. A good start to the game tragically ends in two unfortunate happenings near the end of the half, an unlucky goal and a Shea red card.

Striker Leonardo Campana was substituted for Quinteros in a forced move due to Shea’s red card. Jairo Quinteros played left-back to start the half. The second half started much like the first one did, with Adams and Mota all over the field. Mota was an all-terrain player, defending and attacking with prowess. Adams continued to roar and used his physicality to win balls from the LA players.

The rain came swirling down in the 56’ minute, while Mcvey committed a foul near the right side of the Heron box in the 57’. Luckily, the Vela free-kick flew over everyone and out of the endline.

In a somewhat unexpected, but asserted move Coach Phil Neville substituted Gonzalo Higuain bringing in Ariel Lassiter. Immediately the mobility and speed of Lassiter provided dividends. In the 62’ on his first touch, Lassiter crossed the ball into the box. Changing the tempo for Miami. Edison Azcona came on for Robert Taylor in the 73’. Taylor had a good game but gave the feeling that there’s another level to his game.

Damion Lowe got his head on the ball in the 77’ with the sphere going wide of the goal. An LAFC free-kick into the box by Tajouri-Shradi somehow curled into the Miami goal untouched. Diop was caught taking a nap in no man’s land on the play.

Allll the way in for @isitj29!

Ariel Lassiter had a threatening run into the box in the 83’, leaving defenders behind with some shake and bake. Ultimately, the play ends with a deflection of his shot on goal and a corner kick for the Herons. Emerson Rodríguez came on for Jean Mota in the 86’, once again entering with the game apparently out of reach. Rodriguez, Lassiter, Azcona, teamed up to rev up the Inter Miami attack.

The game ends 0-2 with LAFC taking the 3 points back to tinsel town.

Coach Neville looked a bit flustered after the game. He didn’t mince words about his expectations for his star players.

“ I wanted more quality from my quality players..”

The quality on this team and for this particular game begins with Higuain and runs through Mota, Gregore and Adams. Mo Adams is the only one that had an outstanding match. He was gigantic on the defensive end and efficient with the ball. If Adams continues to develop his technique and overall attacking aspect of his game, he will be phenomenal for this team.

“ Mo Adams I thought was fantastic, I thought he put in a real performance, and Gregore needs to get up to that level of performance as does Mota.”

Phil Neville made the decision to sub off Gonzalo Higuain noting that he wanted more energy from the team.

“We had to bring Gonzalo off because we needed more energy on the pitch.”

Frankly, Higuain was not missed for the rest of this game. The combination of speedy and mobile players like Lassiter, Rodriguez, and Azcona delivered lots of energy. Unfortunately, games are not won on pizzazz but with goals. Higuain is still the team’s most dangerous threat to score a goal, and unless a young player emerges, he will still be depended upon.

DeAndre Yedlin had a strong game despite the result. He pressured high and attacked constantly deep into the LAFC defensive side of the pitch. When asked about his takeaways from the game, he responded

“ …It’s a game just like last week that we need to learn from..we have enough to do well, we just need to sort out the little mistakes..”

The Herons are a young team, but today’s major mistakes were committed by veteran players Shea and Diop. Brek took a bad angle and committed the foul on a breakaway that led to his red card. Diop was frozen on a cross into the box that ended up in the back of his net. This team can’t have players with their experience making those mistakes.

0-2 feels harsh for this game. Inter Miami controlled the first half until an unlucky deflection led to an LAFC goal. Not making excuses, but the team was playing hard, intensely marking on defense and countering with quick passes. The Heron attack needs to improve and provide goals, that’s the bottom line, but they created opportunities in this game. Higuain and Campana must make an impact on the game by scoring when they have the chance.

Lassiter, Azcona, and Rodriguez give the coach weapons to work with. Higuain is still the one that can put the ball in the back of the net. Perhaps a move back as the lone center forward with speedy wingers and a true creator feeding him the ball can spark the Argentine. Neville has his hands full putting this jigsaw puzzle together. I still believe we have to reach the halfway point of the season to make a judgment on this team and on this coach. Today the team played better than in previous games, but still came away with no points at home. This isn’t a sports town that’s known for its patient fans. The Herons need to get results quickly.

Shout out to “La Familia” for braving the rain and shouting and singing the whole game. The same goes for the LAFC contingent that traveled and represented their team passionately.