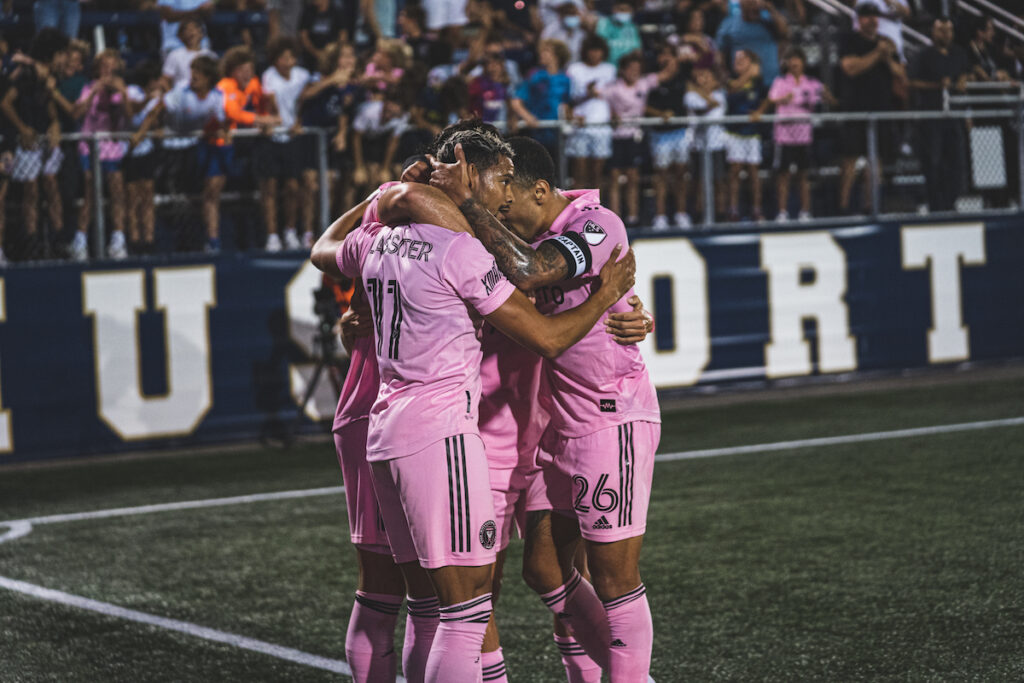 Miami, FL – A lovely and breezy Miami evening saw Inter Miami CF squeak out a 1-0 victory against cross-town rival Miami FC in their first-ever meeting. The match was played at Riccardo Silva Stadium and was the Herons debut in the Lamar Hunt U.S. Open Cup. The win allowed Miami to advance to the tournament’s Round of 32.

IT’S REAL!!! @TheMiamiFC hosts @InterMiamiCF for the 1st time ever in a due-pride @opencup rivalry match!!!

Both squads are fielding strong side so we are in for a classic!!! #VamosMiami #SixYearsInTheMaking #Futbol305 pic.twitter.com/THU9FSDWTb

The lively fans in the stadium witnessed an Inter Miami CF team that jumped onto the pitch with six changes in the starting lineup from their previous game against the Seattle Sounders. Mo Adams, Noah Allen, Drake Callender, Bryce Duke, Jairo Quinteros, and Emerson Rodriguez got the nod from Neville.

The first 10 minutes of the match had the Herons controlling the action, with possession of the ball and a few advances into the Miami FC box. Around the 25’ the tide turned, and Miami FC took control of the game becoming the team with the more dangerous advances on goal. The first half came to a close with the USL squad looking like the more composed team.

There were a few positives from the Herons that we can comment on from the first half. Rodriguez looked dynamic at times, with some magical skills with the ball. Duke was energetic and very mobile. Adams was very physical on defense, always making his presence felt. Callender is a nice prospect at the goalkeeper position.

On the flip side, I expected Duke and Rodriguez to be more consistent and carry more weight in the flow of the game. Their influence in the game was sporadic, and they are too talented for that. Granted that both are young players, this game provided an immense opportunity to shine and demonstrate that they can contribute with more playing time with the first team.

The second half had Neville bring on Yedlin, Mcvey, Mota, Robinson, and Lassiter. As expected, the team regained control of the match. At the 82’ Leonardo Campana with a spectacular left-footed strike gave Miami the 1-0 lead. The Herons held on for the victory, the third in a row in all competitions.

Coach Phil Neville began his press conference by stating how much pride he was feeling after the team’s win. He pointed out that in the last three matches the identity of the squad was emerging, and the foundation was being laid. Neville emphasized that the objective is to get the result, and not necessarily play beautiful fútbol.

“I’m super proud. Probably the proudest I’ve felt as an Inter Miami manager. We speak a lot of identity, seeing all the identity in the last three games, that’s the start of the foundation we want to build. We can play better fútbol and build a better rhythm, but today was all about winning and getting to the next round. We have a sense going forward, this is the real deal.”

The Herons are on to the next round, and that’s all that really matters in this tournament. There are no extra points given for style of play. It’s indicative of the team’s slow progression from the start of the campaign until now that some in the fanbase are complaining that the team is winning ugly. You don’t apologize for wins in pro sports. I too would like for the team to show more on the pitch than just sporadic moments of quality fútbol, but I’ll take the wins.

Tuesday evening’s game finished convincing me that Gonzalo Higuain still has an important role to play for this team. The Herons lacked creativity and were missing a player that could lift the team through an ugly game with a brilliant play. Higuain would have been a great option in the second half for Neville had he been available. Gonzalo should not be the player generating opportunities for others, but no one else except for perhaps Jean Mota has shown that they can take on that role. Duke is a young talented player, but he was inconsistent against Miami FC in a game where he could have shown he was ready to take on that mantle. Robert Taylor is another player that has been erratic in his play. George Acosta is unfortunately out for a few more weeks, but he is a player that has the vision to bust defenses with his passes into space. Mabika is showing a presence and ability at center back that is imposing. The Zambian international has really made the most of his opportunities when thrust into action. It would not surprise me if at some point he plays his fútbol abroad.

Just win baby! The Herons have won three in a row. That is a minor miracle in itself given the wretched start to the season. I’ll take the wins even if they’re ugly. The team is showing character and grit. The season is fairly young yet, and there is still room and time for improvement. This team has been missing many veteran players because of injuries, and yet is finding a way to turn the season around. If they continue to trend in the right direction Miami will be a tough team to beat once all the roster is available for Neville.