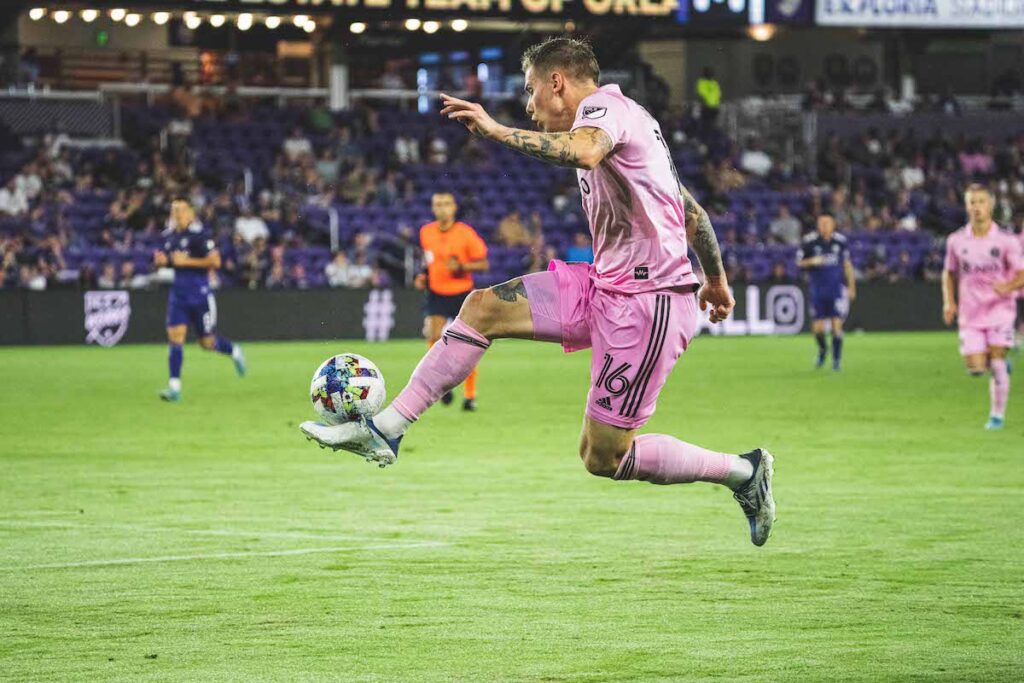 A weather delay caused the match that was scheduled for 8:00 pm to kick off at 10:24 pm. Inter Miami had four changes to the starting XI from the previous match. Mabika, Gregore, Duke, and Campana were inserted into the lineup by coach Neville.

The derby had a fast-paced beginning to it, with the teams going to and fro with the action and the fouls. The first half had the Herons comfortably in control of the match, not allowing Orlando a shot on goal. Inter Miami had some chances to get on the scoreboard but just could not manage to put it in the back of the net.

In the second half, Orlando City was the more aggressive team, managing to control possession and create opportunities on goal. At the 59’ minute Emerson Rodriguez came on for a visibly tired Robert Taylor. Rodriguez would add spice to the Heron attack with his irreverent style of play. Emerson had several spectacular dribbles, but could not piece together meaningful interventions for his team.

Neville brought on Sailor for Mabika and Ulloa for Mota at the 79’ minute. Duke came off for Gibbs at the 85’ minute and Inter Miami was in full defensive mode to try and take a point home. In the extra time around the 92’ minute, Damion Lowe deflects a cross into the box and has it go in the Miami net. A cruel twist to the end of the match. Orlando keeps the three points at home with a 1-0 victory.

The late-night press conference had a tired Phil Neville address the media after the gut-wrenching 1-0 loss. In regards to the outcome, Phil said,

The cruel reality is that Miami outplayed Orlando for long stretches of the match, and still lost. Damion Lowe was one of the best players on the pitch Saturday night, yet his blunder cost the Herons a point in Orlando.

"We just lick our wounds and go back to DRV PNK now for a big game against Philadelphia on Wednesday."

Phil Neville on tonight's match and what's next for #InterMiamiCF. pic.twitter.com/fN2QU1X5QM

Football is cruel, but football always gives you a chance for redemption if you play long enough. The Herons have an opportunity to put this game behind them if they defend their home field on Wednesday night against Philadelphia Union. A victory against the Union will keep Miami on the right path to a playoff spot.

Pozuelo and Jean have been added to this Inter Miami roster for games like this. Indiana Vassilev did not have a great game in my opinion, and he could have been subbed off under normal circumstances. Unfortunately, the Herons had players out for injuries, illness, and other issues. If they would have been available to play, perhaps the substitutions and the team’s fortunes would have been different. Their opportunities will come soon enough.

Emerson Rodriguez is lucky that Phil Neville is his coach. Phil and the organization have faith in Emerson,

“We believe in this kid so much, we trust him so much.”

Emerson has immense potential but has a lot of maturing to do as a player. His decision-making has been subpar, and his defensive effort needs improvement. Despite his shortcomings, the team and the coach have shown patience. Rodriguez needs to repay the patience and trust by continuing to improve, learn and develop with every chance he is given to play quality minutes.

I asked Mota who speaks up in the locker room after a gut wrenching lost like they had last night against Orlando City..It seems that Gregore, Campana🔔, & Yedlin are the vocal leaders @LemonCityLive @MLS @InterHeron @InterMiamiCF https://t.co/ugrHSIkSIK

Damion Lowe, the “Jamaican King” has been playing quality fútbol the last few games. It’s imperative that his own goal against Orlando City not affect his confidence moving forward. Lowe needs to continue to be a pillar in the middle of the Heron defense, inspire and lead Mabika and Sailor.

Phil Neville went defensive for the last 15’ minutes of the match against Orlando. Taking out Mota and Duke effectively killed the midfield for Miami. He did not have all his players at his disposition, and maybe this was a factor in deciding to go defensive. Lately, Neville had been keeping the pressure on the opposing team, and the results had been favorable for Miami. Duke had a yellow card, but Mota did not. At least one of them could have stayed on the pitch to help the Herons maintain some possession of the ball.

A cruel twist and a tough loss for Miami. The roller coaster ride continues, let’s see if a rise or a fall is next.