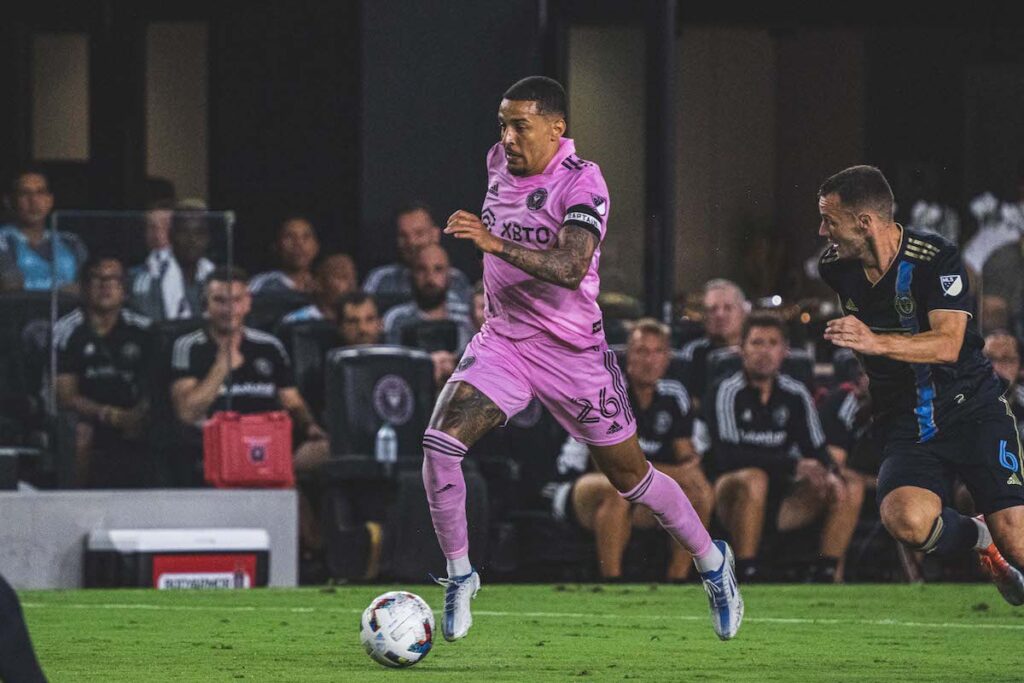 Fort Lauderdale, FL – Inter Miami CF lost its second consecutive match Wednesday night, falling 1-2 against the Philadelphia Union at DRV PNK Stadium. The Herons have an opportunity to end the two-game losing streak on Saturday night at home against Charlotte FC. Miami dropped to eleventh in the Eastern Conference just four points out of a playoff spot.

Inter Miami’s Starting XI had one change from the team’s previous match against Orlando City SC. Emerson Rodríguez notched his first MLS start for the Herons, all his previous appearances were as a substitute.

The game began with Philadelphia Union controlling the action early, while Miami started slow and sloppy. Mikael Uhre bombed a left-footed shot that was parried over the crossbar by Drake Callender at the 4’ minute mark. Near the 11’ minute Uhre had another shot blocked by Callender, keeping the Herons in the game.

Aime Mabika fouled Mikael Uhre on a cut back inside the box for the penalty at 23’. Daniel Gazdag converted, giving Philadelphia the 0-1 lead.

After the penalty, the Herons began to attack more aggressively and with better cohesion. The half ended with Inter Miami pushing forward, but with no goals to show for its efforts.

Emerson Rodriguez came off for Gonzalo Higuain at the 59’ minute. Philadelphia’s Cory Burke headed a cross into the box off a set piece past Callender for the 0-2 Philly lead. Burke muscled his way past Miami defenders to score the goal.

Gonzalo Higuain ripped a left-footed missile past Andrew Blake at the 81’ minute, a genuine GOLAZOOOO!!. Higuain’s goal made it 1-2 in favor of Philadelphia. The last few minutes were frantic, but Miami could not find the equalizer. Philadelphia managed the remaining minutes and took home three points. Miami was left empty-handed and searching for answers.

Gonzalo puts us on the board with an absolute banger!#MIAvPHI | 1-2 pic.twitter.com/jwalWxL8wB

“I felt we lost the game in the first twenty minutes when we started so sluggishly, so slow, second to every ball..”

Inter Miami CF continued to start games slowly, seemingly lacking urgency and once again found themselves playing from behind.  Against Philadelphia, Bryce Duke lined up as a winger on the left side while Emerson Rodriguez started on the right side. Along with Campana, the front three attackers were players twenty-one years old or younger. It’s not an excuse but could be a reason for the lack of cohesion and the number of solo plays as opposed to team build-up.

“We’ve got to respond against Charlotte.”

Coach Phil Neville talks about moving forward and responding to our next matches beginning with Saturday’s match. pic.twitter.com/eBtDXjJfLU

Duke, out of his customary position in the midfield did not have the same effect on the game as he has had in previous matches. The 3-4-3 formation change, and players out of their usual positions did not work well for Miami. The reinforcements by way of Alejandro Pozuelo and Corentin Jean could not come soon enough, along with Ariel Lassiter’s recovery from injury.

The roller coaster ride continues for Miami, currently with a drop in performance and in the standings. Despite losing the last two matches, the Herons are unbelievably only four points out of the final playoff spot.

Emerson Rodriguez got the first MLS start of his career, and once again only showed flashes of his talent. Emerson has not been able to put a complete performance together for Miami yet. The young player forces the action in moments where he could slow down and give an easy pass to a teammate. His inconsistency is part of the growing process he is going through. He didn’t have a bad game but can definitely offer more to the team.

This man has to make a difference in the Heron attack… the squad needs someone to build up play and make great decisions with the ball @InterMiamiCF @InterHeron @MLS @LemonCityLive https://t.co/6tHac7YpyP

Gregore and Mota provide a much-needed balance to the Heron midfield. They had another good game against Philadelphia, but the team needs more firepower. Let’s hope that last night’s golazo by Gonzalo Higuain allows him to regain his best form for Miami.

Saturday’s game vs Charlotte FC is a must-have for Miami. The second half of the season just started, but the Herons cannot afford to lose any more points at home this week. The calendar is busy, and the upcoming games are going to be a tough stretch for Miami.