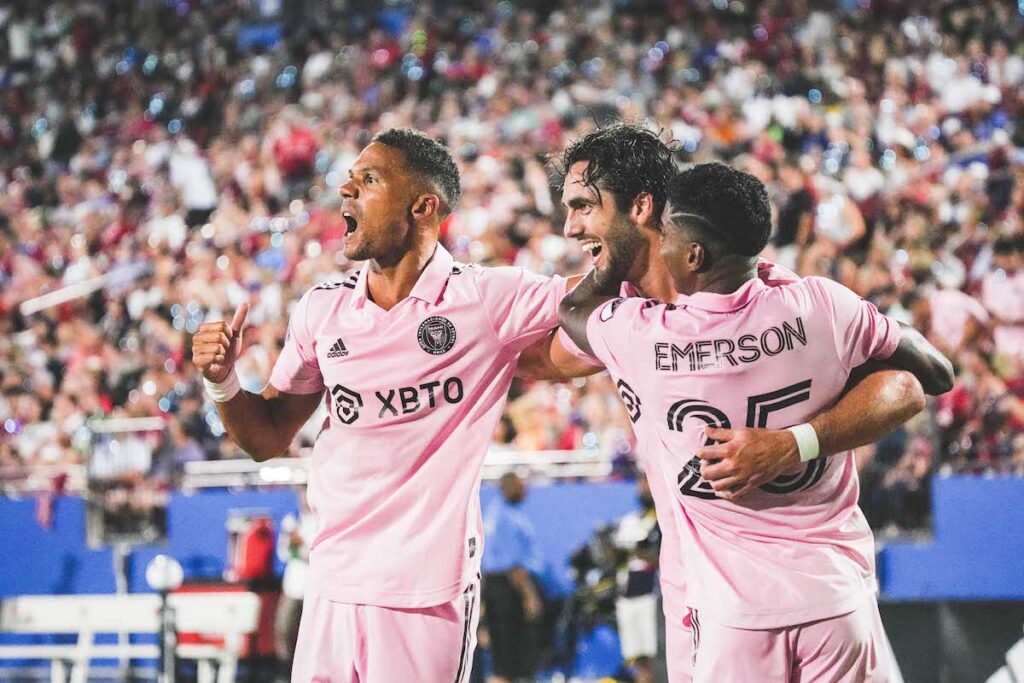 Dallas, TX – Inter Miami CF brought a valuable point home from Texas by tying Monday night’s match at Toyota Stadium against FC Dallas. Golden Boy Leonardo Campana headed in the equalizer off a wonderful assist from Robert Taylor. The match ended 1-1, with the Herons just barely out of a playoff spot at the midpoint of the campaign.

Inter Miami did not begin the match on all cylinders, and FC Dallas soon began to dominate possession. Alan Velasco bent in a free-kick against Beckham’s team at the 27’ minute to give FC Dallas the 1-0 lead. It was a brilliant strike that left goalie Drake Callender diving only to be a part of a beautiful portrait, Golazo.

Alan Velasco is HIM. pic.twitter.com/15aJXgB3M3

Emerson Rodriguez came on for an injured Ariel Lassiter at the 40’ minute. The half ended 1-0.

The start of the second half brought on an Inter Miami team that regained greater control of the ball, yet could not penetrate the FC Dallas goal. Bryce Duke and Leonardo Campana came on at the 61’ minute for Vassilev and Higuaín. The substitutions provided an immediate boost, and the Herons put pressure on Dallas.

A dazzling run by Robert Taylor on the wing led to deep penetration into the box. After an array of skillful moves, Taylor crossed a pass through a Dallas defender’s legs. The ball ricocheted and went airborne perfectly to Campana for the dynamic header into the back of the goal at the 88’ minute, GOLAZO!!!

Once again the Herons pulled out a result in the last minutes of the game, 1-1 draw.

Phil Neville continues to coach aggressively at home and on the road. Lately, his moves have been working, and in regards to his substitutions against FC Dallas Phil said,

“We gambled to win, we took risks to win, we played a system to be aggressive in our press.”

Phil Neville on tonight’s results and getting a point. pic.twitter.com/IMEcUBYwHH

Last game I said I was into the Heron’s new risky business. I’m doubling down on that now. I love to see the team go out and be aggressive. Players are individually aggressive and as a squad. As a writer, and as a fan of fútbol it makes for a more entertaining watch. The great part is that it has also provided results for the team.

Robert Taylor is an underrated player. He has been wonderful for the Herons in multiple positions. Taylor has a knack for all of the sudden providing a fantastic play out of nowhere. The flow to his game Monday night was acceptable, and then he does a magnificent sequence of skills to provide the game-tying assist for Campana. The finish by Campana was provided by the Finnish star.

Emerson Rodriguez continues to flash and continues gaining confidence. He provides a free-spirit, wild type of dynamic for this team. When Emerson puts it all together, it’s going to be fun to watch.

Bryce Duke, the “little gem”, is taking it to another level. Early on in the season, I stressed that if he were to be more consistent, he would be a big part of this team’s success. He’s doing that, and he’s helping this team rise in the standings.

Gonzalo Higuain. Phil gave him the start because he had a good week of practice, and the coach felt he was deserving of the opportunity. Higuain looks to be in better shape, and also seems to be less critical of teammates on the pitch. Through my lens, he seemed to be giving a genuine effort, and I appreciate it. Unfortunately, through my lens, it seems that he no longer can provide a sustained high-level intensity. I have said that Gonzalo can help this team as a super-sub since very early in the season. I fully stand by that. Higuain can help this team but at a rate of fifteen to twenty minutes max in a game. It’s not ideal for the team’s highest-paid player, but the team needs to get something out of that contract.

The first half of the season is over. Seventeen more games to go. Inter Miami CF is trending in the right direction, and anything can happen with this team moving forward.