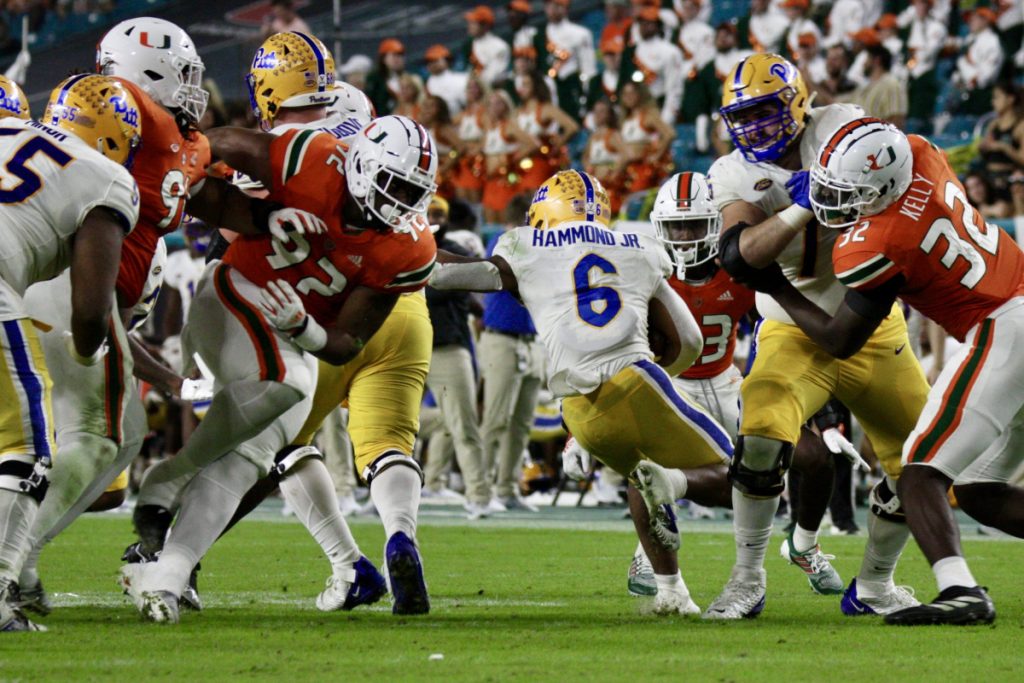 Miami, Florida – Tyler Van Dyke did not last past the first drive once again departing early as the Canes lose to Pitt 42-16 concluding the season. The Panthers got off to a 14-0 lead and never looked back outclassing the Hurricanes on Senior Night. Van Dyke completed four of eight passes for 83 yards and an interception before exiting the game after taking a hit. Jacurri Brown briefly took the reigns before standing aside for Jake Garcia who completed 17 of 28 passes for 192 yards and two TDs.

Will Mallory was everybody’s favorite target (14 looks) making nine catches for 103 yards and a touchdown. With 1,547 career reception yards, the outgoing senior is now second among tight ends in program history.

TD 2️⃣0️⃣ for 2️⃣@IAbanikanda is HIM 🙌

Going Out With a Whimper

Miami got the ball first with Van Dyke stringing together a few good passes including a 39-yard connection to Mallory. However, the promising drive ended when TVD’s pass intended for Jaleel Skinner was picked off by SirVocea Dennis. The linebacker returned it for 67 yards all the way to Miami’s 30. The Panthers converted with a two-yard rushing score from Israel Abanikanda. Van Dyke’s exit resurrected the homecoming nightmare of FSU. Jacurri Brown took over and it wasn’t long before he threw a baffling pick to nothing but Pitt defenders.

This is going to be a very long night if Brown can't get it going #GoCanes || #ItsAllAboutTheUpic.twitter.com/bjICDXs2Sl

The Panthers were set to make it a two-score game but the defense came up huge stopping Abanikanda at the goal line on fourth down. Garcia was next in the QB musical chairs though his drive did not end in an interception. Vincent Davis fumbled Lou Hedley’s punt but Pitt still recovered the ball. The Hurricanes wished they were able to steal it away.

Kedon Slovis hit Jared Wayne for the 66-yard strike widening the gap. A combination of Wayne’s skill and Miami’s inept tackling made it 14-0 Pittsburgh. The defense held out for a bit with plays from Kamren Kinchens and Leonard Taylor but it was only a matter of time. The visitors led by as much as 28-0 before Miami finally got on the board with a 25-yard field goal from Andres Borregales. The rest as they say is history. This is the fifth time this season the team gives up 40 or more points.

The humiliating defeat is an exclamation point to a really disastrous year. The last time the Hurricanes lost 5 home games in the same season was way back in 1975. The L’s were against Middle Tennessee (an early sign of trouble but not the first), North Carolina, Duke, FSU, and the non-Conference USA Panthers. Fans are left wondering how things got so bad. Injuries, inconsistent performances, chemistry, and players unable to step up are just some of the issues. For the latter, at no position is this more readily apparent than at quarterback. Both Jake Garcia and Jacurri Brown were not the answer, at least in 2022, when Van Dyke went down.

Late score by @XavierRestrepo1 for the #Canes makes it 42-16 in favor of #Pitt. It’s been a though first season for Mario Cristobal at the helm. #GoCanes pic.twitter.com/Na9BJN1dku

In retrospect, we vastly overestimated the team’s capabilities. The rebuild, or reload as some would put it, starts now. Likely, one of the first moves might be determining the future of offensive coordinator Josh Gattis. I foresee lots of players hitting the transfer portal but it’s an opportunity for UM to acquire new faces. When asked about how many players were going to hit the transfer portal, coach Mario Cristobal said to remember that the process is a two-way street and that not everyone is not invited back.

It’s a shame the seniors had to go out this way. With year one of the Cristobal era over, fans can take solace in that the incoming recruiting class and future transfers can make 2022 a distant memory. So with the fall of Van Dyke and the Canes season over with it’s time to bid you farewell. Until next year, stay frosty.