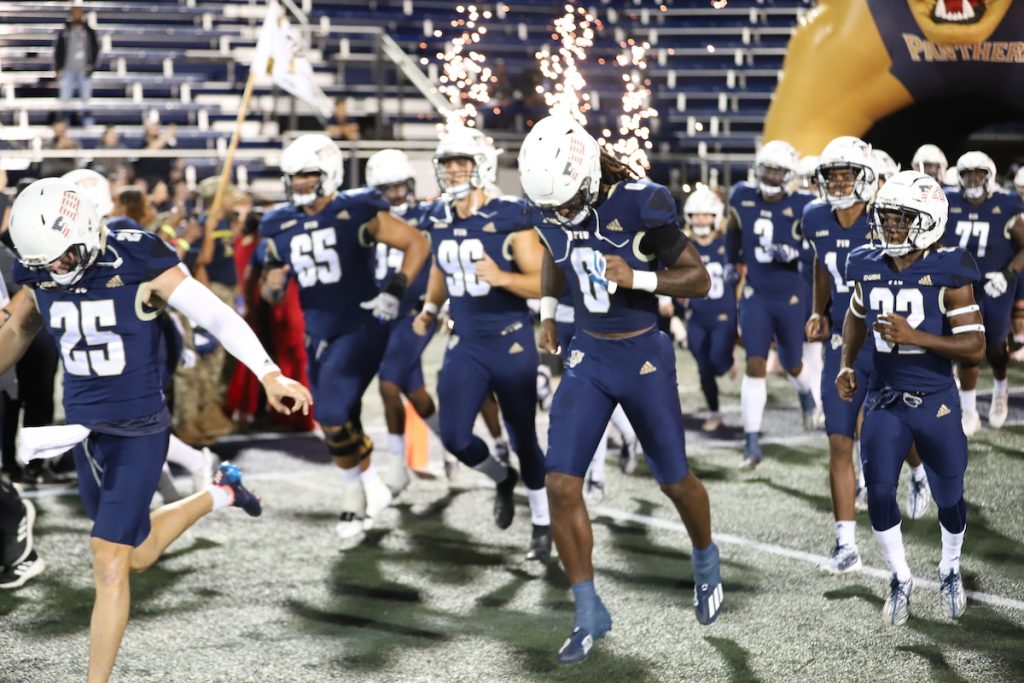 Miami, FL – With bowl game hopes out the window for FIU, we move on to the final week of the FIU Football season against the Middle Tennessee Blue Raiders, who have already clinched bowl eligibility off a huge win against Florida Atlantic. FIU will celebrate Senior Night as three seniors will play their final game in their FIU jerseys. These seniors include Dorian Hall, Davon Strickland, and Kyan Brumfield. “Last one is a bittersweet moment. Just trying to hold in all the tears” said Hall when asked about playing his final game in FIU.

The Blue Raiders can be described as one of the most complete teams in Conference USA. Although they are pass-heavy, you can never doubt running back Frank Peasant who has led the team in rushing yards (692) by a wide margin. Coach MacIntyre spoke a little bit about Peasant and described him as “Physical and a hard runner.” Quarterback Chase Cunningham is one of the top QBs in Conference USA and has been phenomenal with 2,641 passing yards, 19 touchdowns, and 9 interceptions. “Wouldn’t you call him a playmaker?”, said Coach MacIntyre when asked about the Blue Raiders quarterback. He followed it up by mentioning the many attributes that Cunningham brings to the table. The Middle Tennessee wide receiver core is also one of the most complete and balanced groups with the number of targets and production you see on a week-to-week basis. Jaylin Lane and Izaiah Gathings lead the charge in the wide receiver core.

To start off, #FIU Head Coach Mike McIntyre talks about Middle Tennessee quarterback Chase Cunningham and what to expect from him. #PawsUp @LemonCityLive @PawsUpPodcast pic.twitter.com/4tGU3Nmqur

When asking the coach about some of the players that stand out to him on the Middle Tennessee Roster he mentioned wide receiver Jaylin Lane and DJ England-Chisolm as two wideouts “that can fly”. Lane is having a great season with 769 receiving yards, which leads the team. England-Chisolm has 322 receiving yards on the season. Coach also mentioned how defensively Middle Tennessee is “really active.” Coach goes on to specify who stands out to him on defense with Jordan Ferguson who is 6’2″, 271 pounds. Ferguson this season has 6.5 sacks, 27 solo tackles, and two forced fumbles. Coach MacIntyre also mentioned that Ferguson is someone that “harasses the passer a lot.” Finally, coach mentions some of their secondary who are extremely active and “flies around a lot.”

Dorian Hall is a Hollywood, Florida native who went to South Broward Highschool. Dorian has been with FIU for the past six years. This includes three bowl appearances, being a part of the most wins in program history, and also being part of the losing portion in recent FIU Football history. “I didn’t think it would have ended so fast”, said Dorian Hall when speaking to the media on Tuesday. Hall spoke about being in FIU for the ups and downs of the program but feels confident about where he is leaving the program.

When coach MacIntyre was asked about Dorian Hall he mentioned that he has only known him for about 10 months. “He loves football, I mean he truly loves it”, said MacIntyre when talking about Dorian Hall. MacIntyre says that Hall has been a big inspiration to him and wishes that he goes to the NFL. Hall this season has had 12 solo tackles and two interceptions. He has been by far one of the top FIU cornerbacks in the past couple of years.

Coach MacIntyre talks about the seniors that will be honored for Saturday’s game. One of them includes six year corner Dorian Hall.#FIU #PawsUp pic.twitter.com/ZjCcGnj8Cu

Keys to the Game: