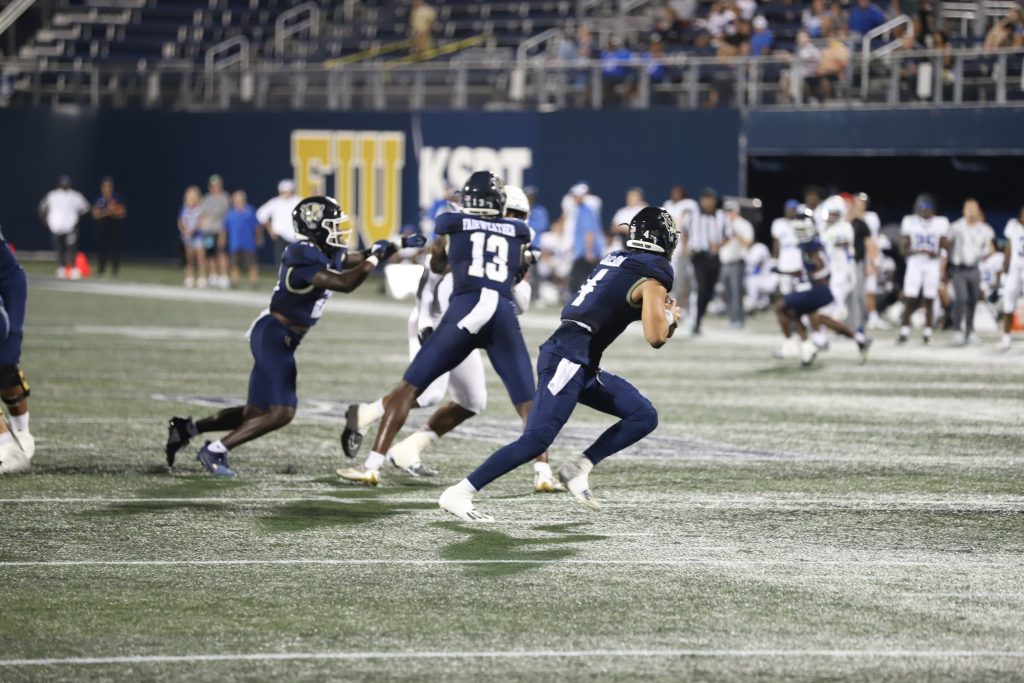 The FIU Football season has come to an end. Unfortunately, it ended with Haden Carlson throwing an interception that secured the 33-28 victory for the Middle Tennessee Blue Raiders. You may be wondering why Haden Carlson was mentioned and not Grayson James. Although Grayson James was fully suited up, he came out of the tunnel limping and had little to no movement during warmups. It was later announced postgame that Grayson James had a thigh injury that worsened throughout the week. Haden Carlson was informed 4-5 hours before kickoff that he would be the starter. Although there was a change at quarterback, the FIU offense looked lights out. However, it was not enough to secure the fifth and final win of the season.

#FIU Football Head Coach Mike MacIntyre meets with the media postgame. Here is the full press conference. Will be breaking it down into clips soon. #PawsUp pic.twitter.com/IIMj7X3HNc

Carlson was named the starter at the beginning of the season but was concussed in week one against Bryant. That kept him out for the next four weeks. Grayson was given the reps and they decided to roll with James at quarterback after that. Carlson was thrown into a couple of situations this season, but mostly when FIU was getting blown out. Tonight this wasn’t the case. Carlson threw for 414 yards, 4 touchdowns, and four interceptions.

On the Plus Side

When looking at the positives of Carlson’s start, you need to look at how he spread the wealth around to his receivers and two tight ends. Each receiver had more than one reception and four of them surpassed 50 receiving yards. Deeper into the game, the game plan revolved around tight end, Rivaldo Fairweather. Rivaldo hauled in three touchdowns and 152 receiving yards. Carlson also had success with the passing game thanks to Dean Patterson, who was a high school teammate of his. When asked about Patterson, Carlson began to tear up. “I am so happy for him, man. He’s such a great kid”, said Carlson as he spoke about Dean Patterson emotionally.

On the Down Side

When looking at the negatives for Carlson, the first thing that stands out are the four interceptions that he threw. The first two interceptions were both deep shots that Carlson was taking. Both were underthrown. The final two interceptions cost FIU the game. The first of the last two INTs was thrown to Jakobe Thomas, who took it to the house to take the lead. The last one was also to Thomas to seal the deal and win the game for Middle Tennessee. Besides the four interceptions, you can look at the final play of the game on offense.  The case can be made that Carlson should have thrown it out of bounds a little bit more. Besides the interceptions, Carlson played a phenomenal game and should be given a lot of credit for the way this offense looked tonight.

One of the keys to the game that was mentioned in the preview was to get to quarterback Chase Cunningham. FIU did exactly that and it paid off. Although Cunningham rushed in for two touchdowns, FIU did not allow a single passing touchdown and sacked him three times. No running back reached 100 yards, and although the receivers were all given a considerable amount of targets, FIU kept the playmaking quarterback in check throughout the night. Cunningham finished 29/42 with 279 passing yards and zero passing touchdowns.

The first two drives on the defensive end for FIU were crucial. Although MTSU got to the red zone twice, FIU put them in fourth-down situations both times and forced two field goals. That point swing made a considerable difference in the course of the game. In the fourth quarter, the special teams, thanks to Jeramy Passmore, also came in with a huge block to keep the 28-27 lead with around 5:00 min left in the game. It is fair to say that the FIU defense left us with a desire to see what is in store for 2023.

New names in the record books

The favorite target for the FIU quarterbacks this season has been Rivaldo Fairweather who has 28 receptions, 426 yards, and 3 touchdowns. Although all of his touchdowns came in on the final game of the season, Fairweather has been someone who has been a help when FIU needs to move the chains and get some big plays. Fairweather is a sophomore who still has some years left in him when it comes to collegiate football, so the question becomes if he will be back with FIU next season. That is still to be determined.

This was crazy last night. Maybe the best play of the night. pic.twitter.com/9E8SsNa59J