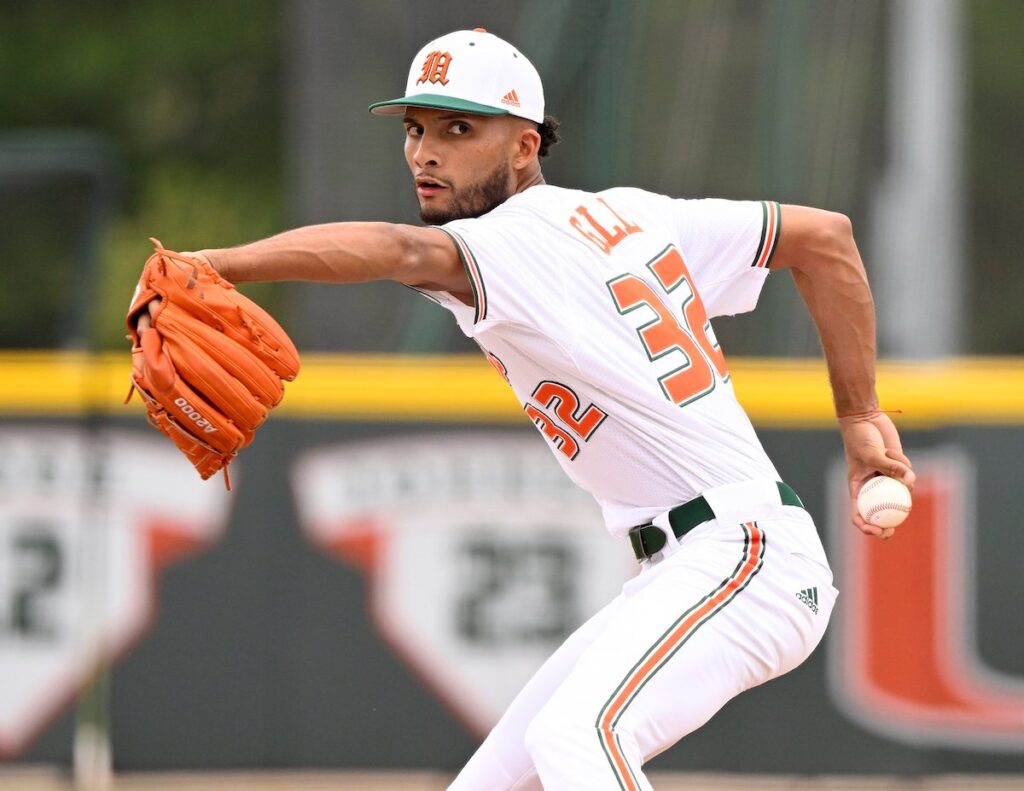 Miami, Florida – Tatem Levins ended any hopes of a Miami sweep, lifting two home runs to propel Pitt 9-4 over the Hurricanes ending their four-game win streak. Alejandro Rosario couldn’t get it going struggling from the very beginning. The sophomore righty was yanked in the third following six unanswered runs.

Billy Corcoran, meanwhile, put up quality numbers limiting The U to one run on three hits through seven innings of work, fanning eight. The junior threw 104 pitches, 72 of them strikes. After humiliating Pittsburgh 17-2 yesterday, the offense looked spent. Unable to counter the Panthers’ early barrage, UM found itself in a hole and remained there throughout the series finale.

A dozen homers for @TatemLevins this spring!

Pitt threw the first punch in the opening frame when Levins’ pop fly to left field was carried by the wind turning into a solo home run. In the following inning, Jordan Anderson lined one up the middle with two runners on driving in Tommy Tavarez. Dom Popa also singled through the center making it 3-0 Panthers.

Things went from bad to worse as Levins struck again, this time with a homer to right doubling up Miami 6-0. Coach Gino DiMare pulled the plug on Rosario’s start after he walked Bryce Hulett to begin the third. UM switched to reliever Ronaldo Gallo who really stepped up pitching a career-high three innings, retiring eight of the nine batters faced including four punchouts. However, despite Gallo’s efforts, the hitting languished.

Miami got its first hit of the game in the third inning via a base hit from Henry Wallen. Then in the fourth  Yohandy Morales mashed his eighth dinger of the year, a no-doubter, deep to left field putting the Canes on the board. By the seventh inning stretch, these were their only two hits.

The hole got deeper.

A costly defensive error by right fielder Zach Levenson allowed Pittsburgh to negate Yoyo’s homer and then some in the sixth. The freshman let the ball roll past him turning Anderson’s single into a triple, plating two to make it 8-1 Panthers.

Levenson belted a three-run bomb in the ninth and although it was too little too late, the kid redeemed himself.

Not going down quietly…

Opposing hitters were locked on Rosario pouncing quickly and repeatedly. What we saw today was his early-season version. Statistically, he’s having a down year but the hurler has shown flashes in the pan. He had solid performances facing North Carolina, Duke, and even Virginia Tech. Consistency is his problem. Whenever Rosario starts you just don’t know how it’s going to turn out. It’s not entirely his fault.

Another RBI-single for @_JordAnderson! And a Hurricanes allows Brock Franks to score as well!

The offense should have saved some of those runs yesterday. When you score that much your next game is very likely to be less productive. Miami couldn’t finish off the Panthers but they won the conference series regardless. The Canes have won six of seven weekend tilts in ACC play. The winning streak is gone but the boys remain in the driver’s seat for the Coastal Division.