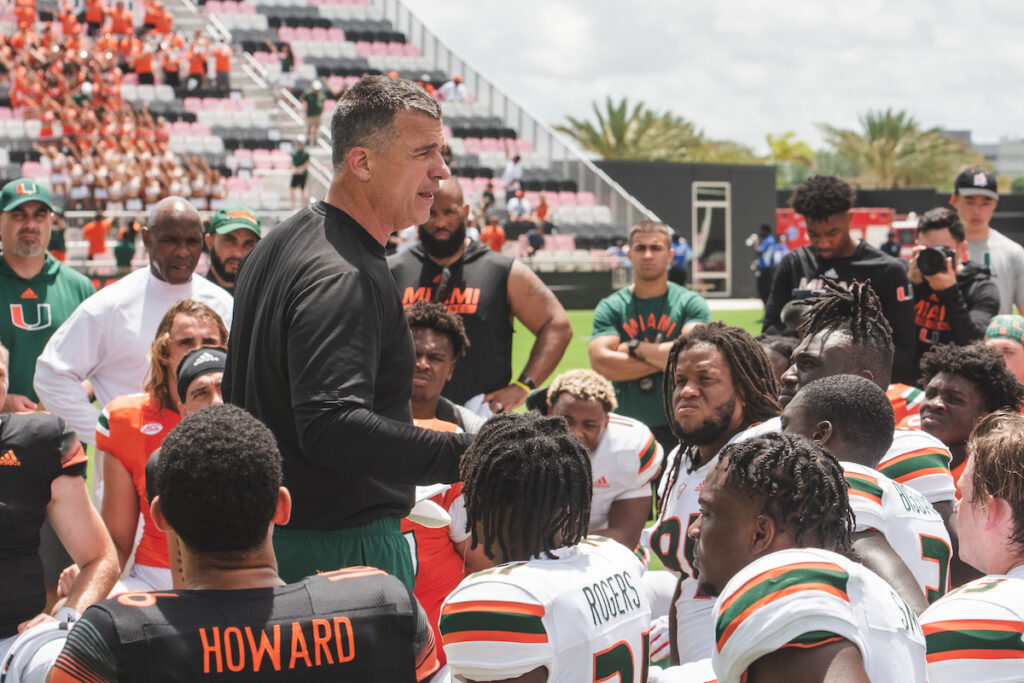 The moment had finally come for University of Miami football fans. They got the chance to see Mario Cristobal in orange and green during the Hurricanes’ spring game. There has been a lot of excitement and anticipation for the upcoming season and headlining the offseason was Cristobal’s return to South Florida.

The Hurricanes made their home for the spring game at DRV PINK Stadium in Fort Lauderdale, FL. Lines were spilling onto Commercial Blvd. before the gates even opened. Fans were tailgating from the start at 9 am and did not stop until kickoff at noon.

30 minutes from the start of @CanesFootball Spring Game! Players are on the field and participating in different practice drills. Fans are still making their way from the tailgating section. #ItsAllAboutTheU #GoCanes #TheU @LemonCityLive pic.twitter.com/ztWfVrdigp

In Cristobal We Trust

Head Coach Mario Cristobal is back in Miami after coaching in Alabama and Oregon. As a player, Cristobal was part of two national championships with the Canes in 1989 and 1991. He will be bringing a winning culture to Miami after leading Oregon to two Pac-12 titles.

Cristobal also has a reputation for turning programs around and getting the best out of his players, especially during his time at Florida International University. The Panthers were struggling prior to Cristobal’s arrival but after a few seasons, he led F.I.U. to the Sun Belt Conference title. Cristobal is bringing over 20 years of coaching experience and wants to bring the same level of intensity to the program just like in his playing days.

“We want to see a team that plays with passion, with toughness, with physicality, with resiliency that can execute at a high level and to get there, there’s no magic formula, there’s no secret sauce, or hocus pocus, we’ve got to get to work.”

With less than 100 days to the start of the regular season, Cristobal and the rest of his coaching staff still have a lot more work to do. They still need to incorporate more players into the offense and the program still has room for more scholarships. Cristobal stressed the importance these next few months will be for the players’ development.

“Overall progress, but you wish you had fifteen more of these but you don’t so what happens now the choices, the decisions of the players have to take that next step. We’ve got to grow up, we’ve got to be mature. We got to understand that everybody has 100 days until game one.”

Cristobal's thoughts on the @CanesFootball offense today,"The supporting cast always has to be even more precise than the quarterback. He’s one piece, you got 10 pieces surrounding him. The bottom line is we just got to continue galvanizing this team. @LemonCityLive #GoCanes pic.twitter.com/3b9KveOTda

Tyler Van Dyke and Jake Garcia received the bulk of playing time out of all the QBs on the roster. TVD was showing off his arm throughout the afternoon and completed 21 of his 32 passes. He finished with 177 yards and one touchdown but felt like there’s still plenty of room to grow.

“There’s a lot of option routes with the running backs, tight ends. That’s what he [Cristobal] does, there’s some shots we didn’t call today, we threw a couple deep, didn’t really connect, you’ll see during the season we’ll connect on those.”

Jake Garcia showed off the depth the Hurricanes have at QB. He was impressive in his limited action going 14-23 with his passes for 147 yards. There will be a lot of competition in the QB room as the offseason continues and Garcia is ready when Cristobal gives him the green light.

After @CanesFootball Spring game Jake Garcia talked about Cristobal's message to the team,"Close the gap. Close the gap to our goals. My personal goal is to keep putting one weight and just know that playbook inside and out so that this way I’m ready to go." @LemonCityLive pic.twitter.com/xPpRJgqLoh

TVD and Garcia will be getting more familiar with Cristobal’s coaching style and strategies. They will also need to get more looks with their new receivers. The Hurricanes have important shoes to fill after Charleston Rambo declared for the NFL Draft. This is a new era for the Hurricanes with the type of offense Cristobal can incorporate into the program. With TVD and Garcia leading the charge, it’s crucial to find the right pieces to play alongside them.

There were a few standouts in Miami’s spring game. In the run game. Thad Franklin Jr. and Henry Parrish Jr. were the main backs used and collectively ran for 101 yards and an impressive three touchdowns.

Early in the spring game, the tight ends weren’t involved much in the offense. In the second half that changed and fans got to see Kahlil Brantley and Elijah Arroyo athleticism. Both players had four catches.

On the defensive end, Miami had an unfamiliar face step up. Defensive end Jacob Lichtenstein recorded a sack and deflected a pass that ended up becoming an interception.

“Felt amazing, dream come true. I never played with my last name on my back so I felt a lot of pride in that. It felt great, I had a great time out there, you know football is a game so if you’re not having fun doing it, then you’re not playing it right,” said Lichtenstein after the spring game.

Freshman Cyrus Moss came out of the gates strong and could be a mainstay in the defense for the next few years. Moss had two sacks in the game and the newcomer caught the attention of a lot of his teammates including Lichtenstein.

“He has great movement skills, he makes it very easy for me to come around the edge, we work well together, he’s picking it up quick and he’s gonna be a great player. He’s got to pick it up a bit in the weight room, eat a lot more, but he’s on the right track and he’s doing everything the right way.”

Cyrus Moss on his comfort level in his reps with the first team: #CanesFootball pic.twitter.com/6G66HnvOom

As more time goes by, we are slowly getting back to my normality in the sports world. The Hurricanes’ spring game was a clear indication that it is great to have fans back in venues. Fans got to finally see in action the players they only saw on tv or heard about on the radio.

It was a great moment to see players and coaches taking the time after the game for autographs and pictures with fans of all ages. Families of the players and coaches were there and you can definitely feel a close-knit environment. It is no secret that culture change occurred when one of Miami’s greatest returned home.