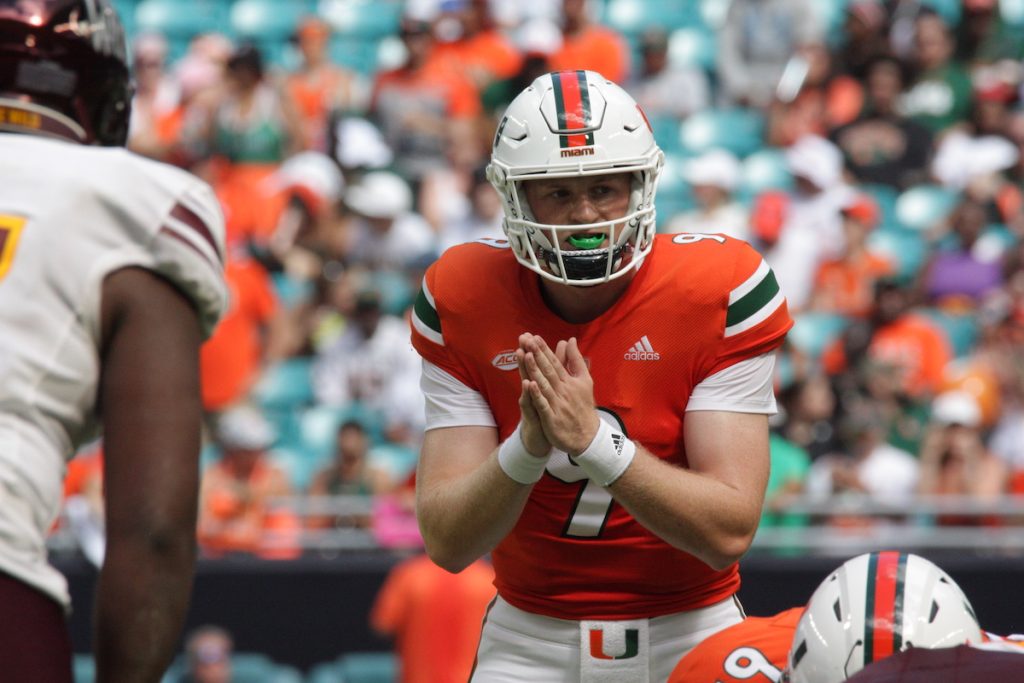 Miami, Florida – Well, what do we have here? The Miami Hurricanes overcame some unexpected adversity and now travel to College Station squaring off against Texas A&M. What was originally thought of as a highly anticipated battle between undefeated teams is no longer the case. After a wild weekend of upsets, the Aggies fell to Appalachian State at home 17-14. Caden Davis flopped the 47-yard field goal late in the game-sealing A&M’s fate. The Mountaineers fought with a lot of heart pulling off a big win for the Sunbelt Conference. The Aggies tumbled all the way down to No. 24 in the AP Top 25 Rankings while Miami crept up two spots to No. 13.

Regardless of Texas A&M’s improbable defeat, this remains an important road test for the Hurricanes. Observing their victory over Southern Miss, plenty of corrections can be made. As their first game away from home against a talented opponent what we see this weekend will illustrate where they are as a program. For all you sports betting fanatics, Miami opened the week as 7.5 point underdogs likely due to their sluggish 30-7 win over the Golden Eagles.

Looking forward to a great opportunity this weekend.

Devon Achane (RB) – Noted for his speed, Devon Achane has plenty of athleticism that’s further reinforced with significant playmaking ability and production. This was on full display in week two as Achane scored both of the Aggies’ touchdowns. In the second quarter, he rushed for a 26-yard score followed by a 95-yard kickoff return TD in the third quarter. He finished the afternoon with 10 carries for 66 yards and two kick returns for 120 yards. If the Canes hope to contain Texas A&M’s offense, they’ll have to contain Achane.

Haynes King (QB) – Despite his recent struggles against App State, Haynes King is part of an explosive offense that can stretch the field. Held to just 97 yards in the air last weekend fumbling twice, King threw for 364 yards to open the season versus Sam Houston recording three TDs (and two interceptions). It’s worth noting Jimbo Fisher mentioned in his post-game press conference that they considered subbing out King. On Monday, Fisher went on to say they’ll be evaluating everything. Miami could see backup Max Johnson Saturday night.

Antonio Johnson (DB) – Leading the defensive effort with 13 tackles against the Mountaineers, Antonio Johnson has one sack in 2022. Johnson can have bursts of speed to close the gap in zone coverage and is a physical defender. A good tackler, this junior defensive back can also track the ball making him able to break up plays. Antonio and his teammates will be looking to disrupt UM’s offensive schemes.

Ainias Smith (WR) – Another of the dangerous speedsters, whoever ends up as the starting quarterback will have the services of Ainias Smith. His numbers last game were pretty lackluster, catching four passes for 21 yards. However, he’s tied for first in receptions (10). Smith leads the team in both yards (185) and touchdowns (2). Like the others, the senior has lots of athleticism and the high-quality mobility makes him a serious threat with the ball in his hands.

KING 🚀🚀 AINIAS SMITH. AGGIES GET IN THE ENDZONE AGAIN. 🚨 pic.twitter.com/Fr7FzjECQQ

Tyler Van Dyke – UM’s hopes of winning this weekend rest on the shoulders of this man. He’ll have to do it without his most reliable receiver. On Thursday it was reported Xavier Restrepo is out indefinitely with a foot injury. Tyler Van Dyke clearly didn’t have a good game versus Southern Miss completing 20 of 29 passes for 261 yards. This includes a touchdown and an interception. The Canes were unable to finish drives with some of those failures self-inflicted. The hope is that TVD responds with a much more complete performance, especially with Jacolby George’s return.

Jacolby George – What impeccable timing. Miami will see the return of Jacolby George after serving a two-game suspension. Now that Van Dyke’s favorite target (11 Rec for 172 yards, 1 TD) is out George should get the opportunity to step up. Previously, offensive coordinator Josh Gattis said the sophomore would have to earn his playing time. Guys like Michael Redding III, Key’Shawn Smith, and Brashard Smith have been playing well so there’s plenty of competition. Regardless, in light of the crushing news, it’s all hands on deck against the Aggies.

Jaylan Knighton – Rooster had a pretty quiet season debut. After missing the first week due to injury, Jaylan Knighton only had six carries for 19 yards. Henry Parrish Jr. has been the guy when it comes to the ground game with nice support from Thaddius Franklin Jr making me wonder how much of a workload Knighton is going to get this weekend. If UM falls behind considerably, they’ll likely ditch the run nixing his presence. If Parrish struggles, look to see Knighton get more opportunities.

Leonard Taylor III (Defensive Lineman) – I was impressed with the way Leonard Taylor stopped Frank Gore Jr. in the backfield following up with a big sack to stifle Southern Miss’ drive midway through the third quarter. It’s those kinds of plays that can fire up a defense creating consistency in shutting down opposing offenses. The U will need more of that when they visit College Station. After two games Taylor has four tackles and a sack.

The Hurricanes should clean it up and play a lot more balanced leading to a very hard-fought game. However, it won’t be enough. Even with Restrepo, this was going to be quite a challenge. The Aggies are going to play with a higher intensity after losing to Appalachian State in front of an advantageous home crowd. Texas A&M will hand the Canes their first loss of the season 30-21.