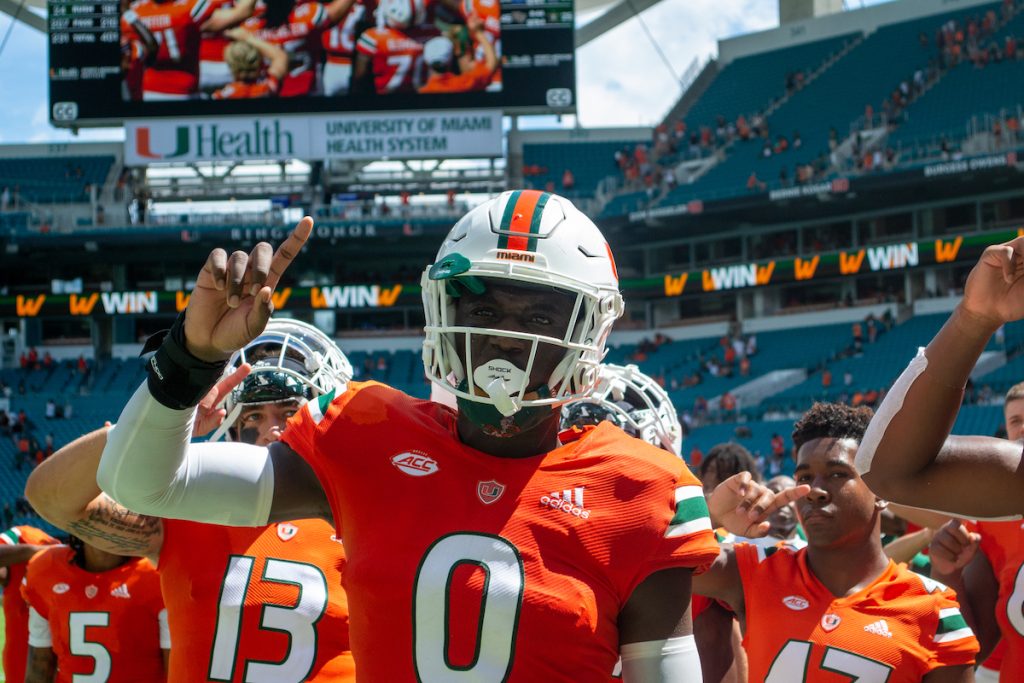 Miami, Florida – Although the Miami Hurricanes struggled early they still took care of business downing the Southern Miss Golden Eagles 30-7. Tyler Van Dyke was not at his best throwing 141 yards through two quarters including an interception. He did improve finishing the day completing 20 of 29 passes for 241 yards and a touchdown.  TVD faced significant pressure getting sacked four times as the O-Line struggled to protect him.

The Hurricanes snuck in a one-yard rushing TD courtesy of Henry Parrish Jr. late in the second quarter to lead at halftime 10-7. For the second time in as many games, Parrish hit the centennial mark. The Ole Miss transfer had 24 carries for 116 yards. He also had 3 catches for 18 yards. Making several changes, the Canes generated momentum in the second half extending their lead and preventing USM from scoring further. Xavier Restrepo led the receiving corps with six catches for 72 yards. The defense forced three turnovers, four pass breakups, and three sacks.

After putting up 70 points on offense last weekend, Miami got off to a very slow start. The Hurricanes’ opening drive resulted in their first punt of the season. Lou Hedley kicked it away for 53 yards to the USM 18. UM got on the board after their second drive settling on a 30-yard field goal from Andy Borregales. Van Dyke’s pass to Will Mallory was blocked by Jalil Clemons denying them a potential touchdown.

Malik Shorts with the pick! pic.twitter.com/4z4Khqkwng

Despite the disappointing first half, there were some good plays. Brashard Smith made a big 30-yard catch through two defenders midway in the first quarter. Tyler also connected with Restrepo for 24-yards early in the second quarter. That specific drive was cut short when TVD’s 4th and 4 pass intended for Michael Redding III was picked off by the ever watchful Malik Shorts. The pair found success late in the quarter with a nice pass up the middle for 16 yards ultimately leading to the Parrish TD.

For a while there, the defense did not apply a lot of pressure on Wilcke. He found the team’s number one receiver, Jason Brownlee, for the terrific 32-yard touchdown, their lone score. Wilcke also linked up with Demarcus Jones for 36 yards midway through the period. The freshman completed 16 of 27 passes for 207 yards.

Miami stepped up its efforts in the third quarter creating some great consistency on both sides of the ball. Leonard Taylor III stopped Frank Gore Jr. in the backfield. If that wasn’t enough Taylor went on to sack Wilcke that same drive. Feeding on the defense’s success, the Hurricanes pulled off a flea flicker firing it downfield hitting Key’Shawn Smith for the 35-yard TD.

Might be the play of the game, Canes pulled off a big score putting some more distance. They now lead 24-7 in the fourth quarter. pic.twitter.com/0mKnSPorun

Tyrique Stevenson came up with the big interception late in the third quarter recording Miami’s first turnover of the game. Chantz Williams nabbed the next on Wilcke’s fumble. Andy Borregales shined in the fourth nailing two field goals. With the win already secured Jake Garcia got some playing time completing two passes for 15 yards.

I have mixed feelings about today’s game. Yes, they made adjustments and vastly improved in the second half as any good team does but this is a battle of four quarters. Consistency is key. Offensively they produced 451 total yards, were a perfect 4-for-4 in the red zone, and had a great day from Parrish. However, as Cristobal stated in the postgame presser, the offense needs to finish its drives. On third down conversions, the Canes were six for 16. As crazy as it sounds Wilcke and Van Dyke’s numbers weren’t all that different. I certainly didn’t expect that. The latter came close to throwing a second interception in the fourth quarter when he lobbed it to Redding in the endzone. Collectively the team committed seven penalties costing them 65 yards.

Brownlee was the only receiver who found success for Southern Miss. I will admit, that play he made on Daryl Porter Jr. and Te’Cory Couch was impressive showing why he’s highly regarded. Jason successfully caught five passes for 102 yards. That reminds me, DJ Ivey dropping that pass intended for Latreal Jones in the fourth quarter was pretty frustrating. It was already over by then but in close games, that’s certainly important.

Jaylan Knighton’s season debut was a quiet one. Rooster had six carries for 18 yards. The tight ends were silent too, granted Mallory could have racked up some yards if it wasn’t for Clemons. Key’Shawn Smith didn’t get the chance to do kick returns so he found another way to contribute. Smith made three catches for 49 yards and a touchdown. He also rushed once for six yards.

A win is a win. Who knows, maybe running into some unexpected adversity helps them to better prepare for their road trip to College Station.