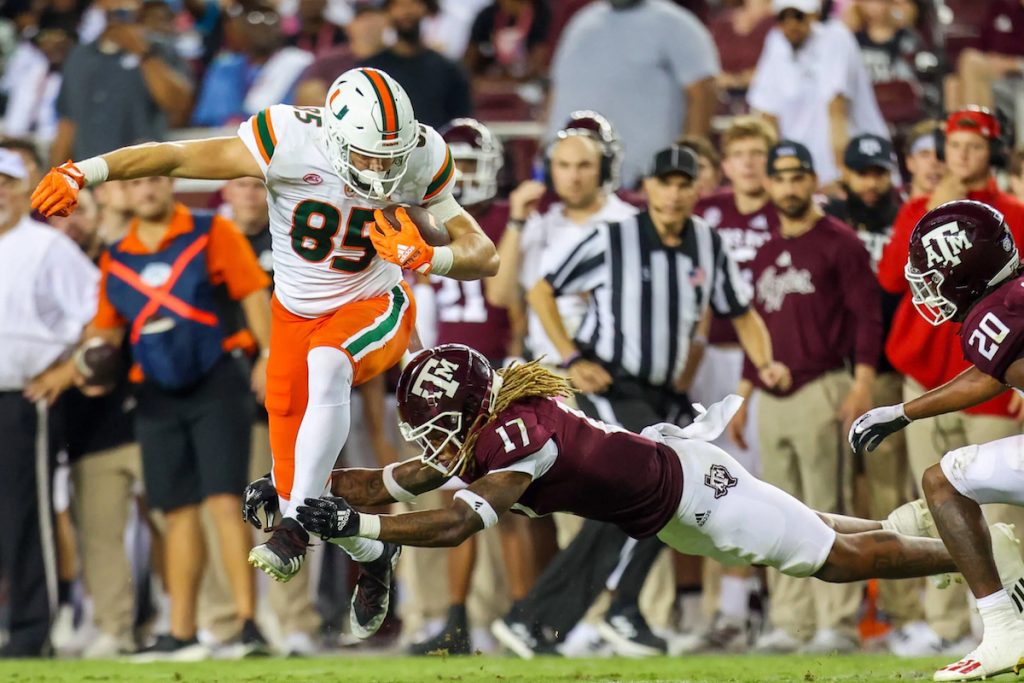 Miami, Florida – Costly mistakes by Tyler Van Dyke, special teams, and others led to a frustrating night where the offense never saw the endzone on the road. Coach Mario Cristobal’s first big game managing the Miami Hurricanes ended in a disappointing 17-9 loss to Texas A&M at College Station. Miscues on both sides of the ball, penalties, and missed field goals beset the Canes who played in front of a crowd of over 107,000.

After their loss to Appalachian State, the Aggies responded by shutting down the short-handed Hurricanes who were without their top wide receiver Xavier Restrepo. On Thursday, it was announced Restrepo would be out indefinitely with a foot injury. Texas A&M’s own secondary was thinned out due to two ejections for targetting. Van Dyke was held to 217 yards, completing 21 of 41 pass attempts averaging just 5.3 yards. UM’s signal caller had trouble hitting his receivers almost getting picked off twice. The highly reliable Andres Borregales missed two field goals with one of them being blocked leaving vital points on the field. Overall, The U was poor in the red zone failing to record a touchdown.

The biggest error of the night was when Tyrique Stevenson muffed the punt return midway through the first quarter. Not only did it make the defense work double but it gave the Aggies excellent field position culminating in a three-play touchdown drive. During that series, Devon Achane ran for 22 yards pushing A&M deep into the red zone. He flashed his explosive speed all night breaking tackles and making Miami’s defenders look foolish. Achane had 18 carries for 88 yards in addition to four catches for 42 yards and a touchdown. He also had two kick returns for 54 yards.

It was backup quarterback Max Johnson’s first start for the Aggies. Following their loss to the Mountaineers, Jimbo Fisher subbed out both his starting QB and kicker putting in Randy Bond. Johnson made 10 of 20 passes for 140 yards and a TD. Miami’s last two drives of the game were symbolic of their evening. Down 17-9 with under seven minutes to go, UM marched from its own 22-yard line. The Hurricanes made it to the Aggies’ 47-yard line before three penalties (two holding calls and an illegal formation) killed the momentum. The Canes nearly got the ball back too. Ainias Smith muffed the punt but Miami was unable to wrestle the pigskin away. UM got one more drive in, however, it was a turnover on downs. Brashard Smith couldn’t make the catch as the ball bounced off his face mask on fourth and four.

I’m not liking where the Hurricanes stand currently. Even with Restrepo, I marked this down as a loss. What makes the defeat concerning is how much it illustrates the team isn’t ready. Miami is further back than it likes to admit. The U’s first big game of the season was a flop. The missed hits and dropped passes continued. Henry Parrish, Jr. had a big dropped pass with 1:16 remaining in the first quarter. If caught Parrish’s chances of digging deep to the endzone would’ve been great.

Tonight's attendance of 107,245 is the third-largest in Kyle Field history and the largest ever for a non-conference game!#GigEm pic.twitter.com/D7flT9QLzC

Fans were already seeing missed tackles on the opening kickoff. You saw it frequently when the ball was in Achane’s hands (and wide receiver Ainias Smith’s). Achane’s 25-yard reception TD was outright embarrassing for the defense. Granted, the D kept the Canes in the game for much of the night. It’s the little things that add up. Speaking of, Frank Ladson, Jr. completely missed a block in the first half last night that could have helped gain a lot more yards. He has to do more than run a route and catch a ball which for the latter pretty much didn’t happen against the Aggies. Forget Miami’s 27 first downs, 392 total yards, and significant time of possession for they mean a whole lotta sweet nothing.

TVD made some great connections with Elijah Arroyo, Will Mallory, Key’Shawn Smith, and Jacolby George but it was yet another disappointing start. His wide receivers had trouble getting open and when they did catches were not made. In fact, the only bright spots I saw were the running game (good work Jaylan Knighton), the O-line (no sacks), and the front seven (lots of pressure and three sacks). On to Week 4.