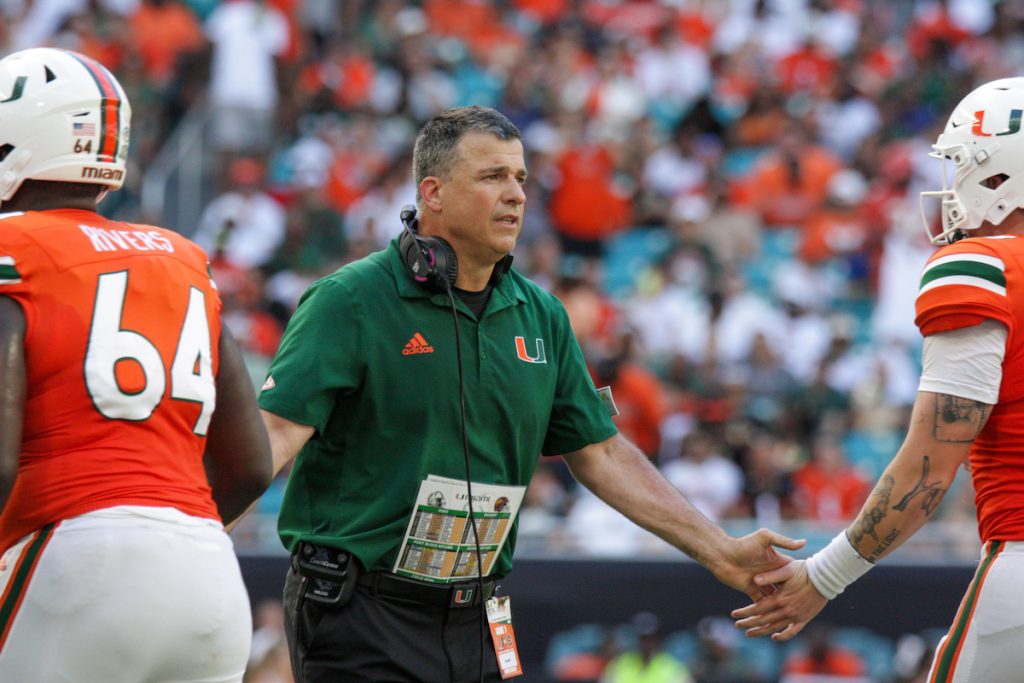 Miami, Florida – With the loss to Texas A&M over and done with, UM faces the Middle Tennessee Blue Raiders for Week 4. It will be without another wideout. Jacolby George sustained a broken hand against the Aggies and is out indefinitely. Miami’s depth at that position has become very thin. Someone needs to step up and it has to be now.  MTSU is coming off a 49-6 thumping of Tennessee State currently sitting at 2-1. They have yet to experience a close game in 2022. The Blue Raiders are led by Rick Stockstill who is in his 17th season at the helm. The Miami Hurricanes are by far the toughest opponent Middle Tennessee faces this season with C-USA play starting the following weekend.

Coach Stockstill’s team has earned postseason bids in six of the last nine years. With that said, the Blue Raiders haven’t beaten anyone of worth yet and are predicted to finish eighth at season’s end. Middle Tennessee experienced lots of turnover particularly the O-line and secondary but the Blue Raiders have a decent running game, a solid wide receiver corps, and a proven quarterback. It’s worth mentioning Stockstill is the fourth-longest tenured coach in the country and third-longest in program history. He’s gotta be doing something right. This is still widely seen as a cupcake game and the Canes should not play down to their opponents.

Chase Cunningham (QB) – The starting signal caller for the Blue Raiders, Chase Cunningham completed 20 of 24 passes last weekend for 216 yards, two touchdowns, and an interception. He also had a seven-yard TD run against Tennessee State. Cunningham is about to get a taste of Miami’s defense, serving as a good test against a legitimate opponent. The senior has been sacked eight times and thrown two picks.

MAKE IT 3️⃣5️⃣!! @Chase_C_5 takes it in himself to put more points on the board! #BLUEnited | #EATT pic.twitter.com/V7QGVMYPHh

Frank Peasant (RB) – So far Middle Tennessee’s running game has been pretty decent and Frank Peasant is the reason why. With 13 carries Peasant hit the centennial mark producing 122 yards and scoring thrice. The sophomore has churned 218 yards with five scores in 2022. Miami is fourth in the ACC against the run, giving up 251 yards. If UM neutralizes Peasant, the Blue Raider offense will be hard-pressed.

Izaiah Gathings (WR) – Speaking of, MTSU fields good wide receivers. Izaiah Gathings is one of a few fellas in this group that can stretch the field. Although Gathings didn’t really factor into the 49-6 victory (3 catches for 30 yards) he currently leads the team in receptions (20) and receiving yards (156) averaging a team-best 52 yards per game.  He isn’t the only one the defenders have to watch out for, you still got Jaylin Lane and Yusuf Ali to keep an eye on.

Teldrick Ross (Safety) – As the lone starter to return for the secondary, Teldrick Ross leads the unit with 15 tackles. With 26 tackles (15 solo) on the year, Ross is on track to surpass his 2021 numbers. Considering Teldrick’s veteran status, this is one of the anchors of a defense that is in a period of regression due to the offseason departures. The group won’t be as stingy as last year. Forced turnovers are a key area trending downwards.

Michael Redding III (WR) – Well then, Michael Redding is debuting in one of my previews though I wish it was under better circumstances. Losing Xavier Restrepo and Jacolby George has left the unit very short-handed. Thus, I want to see not only more involvement for Redding but for the third-year redshirt freshman to step up. In week 3 he had three catches for 29 yards. For the season Redding has eight receptions for 105 yards and a TD.

Andres Borregales (K) – It was just one of those games. The normally reliable Andres Borregales missed two field goals going 3-for-5. Andy only missed four all season last year. Some folks were upset about it but there’s plenty of blame to go around. Borregales should rebound and get back to his steady performances showing off the strength and accuracy he’s known for. He won’t be the only one.

Congratulations to Champagnat Catholic High School’s Andres Borregales for being named the ACC Specialist of the Week after the ‘Canes win against Southern Miss! pic.twitter.com/TlKRAkPiDM

Tyler Van Dyke (QB) – All right, this should be the game Tyler Van Dyke turns it around. Van Dyke faces a secondary ripe for the taking. They should not be a problem. After a rough go at College Station completing 21 of 41 passes for 217 yards and zero touchdowns, TVD returns to the Hardrock for some home cooking. For a guy of his caliber I expect no less than three TDs this weekend and better completion numbers.

Elijah Arroyo (TE) – Fellow Tight End Will Mallory led the team in receptions against Texas A&M while Elijah Arroyo recorded one catch for 29 yards. It happened to be one of Van Dyke’s better passes and showed Arroyo’s potential. I want to see the Canes employ both tight ends, especially with Restrepo AND George sidelined creating new opportunities for the offense. Expect more involvement for Elijah in Week 4 with TVD spreading the ball around.

Forget that No. 25 Miami is a 25 and a half-point favorite. The weakened Hurricanes are looking for a dominant win versus the Middle Tennessee Blue Raiders in order to get themselves back on track before their bye week. Momentum is a precious thing and this cupcake game is a great way to rebound from their tough loss to the Aggies. The outcome of this one is not in doubt. 35-7. 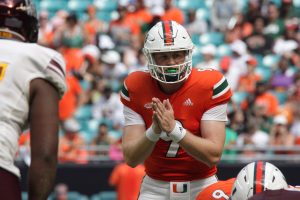