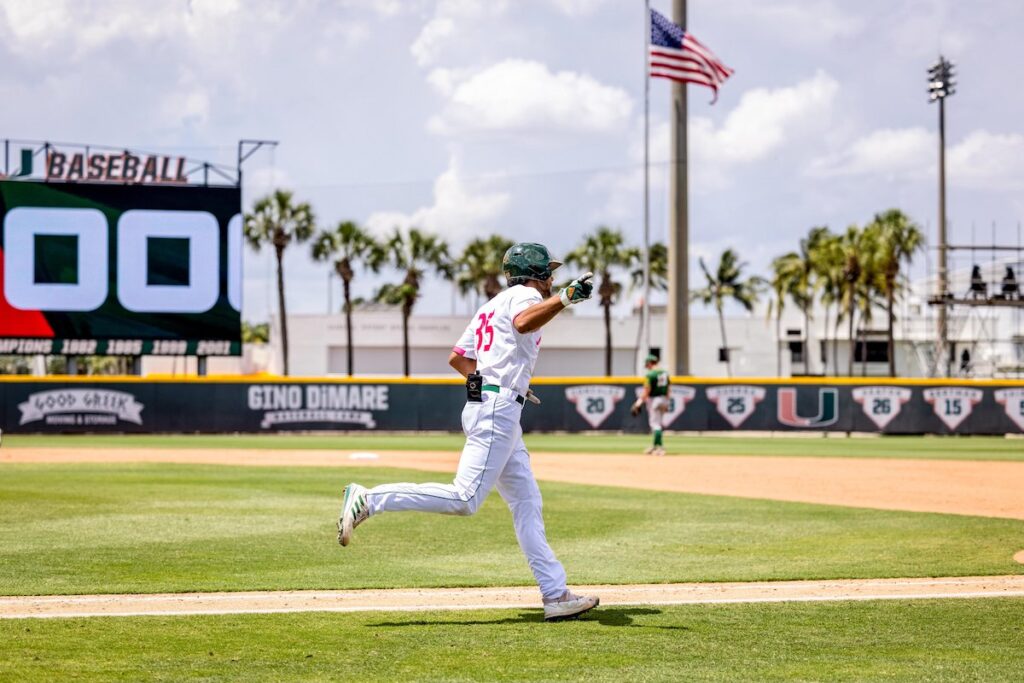 Miami, FL – Yohandy Morales led the team to victory on Mother’s Day hitting his 11th homerun matching a career-high as the Canes sweep the NDSU Bison. Yoyo went 3-for-4 going yard twice to raise his batting average to .354. Morales is the first Hurricane since Zack Collins to have double-digit homers in back-to-back seasons. Miami outscored North Dakota State 44-5 this weekend culminating in a 6-4 victory in game three, improving their record to 35-12.

Alejandro Rosario got the ball on Sunday dueling Evan Sankey. Rosario lasted nearly five innings holding the Bison to a pair of runs. His lone blemish was the homer from Jack Simonsen.

The visitors become a challenge

Morales got things started in the first by launching the ball deep to centerfield for his 10th home run of the season making it 1-0 UM. The Bisons seemingly tied the game and then some in the second when Cadyn Schwabe laid down a squeeze bunt resulting in an error. However, the baseball gods thought otherwise as Schwabe was called out on batter’s interference nullifying NDSU’s run. Will Busch then grounded into a double play to end the inning for North Dakota State.

They did leapfrog over the Canes at the top of the fourth when Simonsen rocketed one off Rosario launching it over the centerfield fence giving NDSU a 2-1 lead. North Dakota State threatened to add more in the fifth loading the bases but reliever Alex McFarlane punched out Garret Hill to get out of the jam.

A seesaw battle erupted in the sixth and seventh frames.

After several quiet innings, Miami got it going in the sixth stringing together back-to-back hits. Edgardo Villegas and Morales moved up after the Maxwell Romero Jr. grounder setting the stage for Jacob Burke who got on base thanks to an error by the second baseman Druw Sackett scoring Villegas. It was Burke’s 50th RBI of 2022.

Burke does a job!

The Hurricanes immediately responded in the form of a towering three-run shot from Yoyo, his second of the day swinging the momentum back to the home team for good. Andrew Walters pitched the eighth and ninth to secure his 13th save of the year.

As the song goes they were taking care of business. It wasn’t much of a series throughout the weekend but North Dakota State finally gave The U an actual challenge. After so many runs in the first two games, it was very likely a scoring drought would occur. Luckily for Miami, the sweep happened anyways. Now the interesting stuff begins. A mid-week home game versus UCF is next with a chance to avenge their previous 10-5 loss nearly two months ago. The Hurricanes then venture to Tallahassee to play Florida State. This is by no means a slam dunk.

YOYO WITH A GO-AHEAD THREE-RUN BOMB!

Once the Seminoles series is over, the boys return home for the last four games of the schedule. It includes the last mid-week contest versus FGCU and the highly anticipated finale with Notre Dame. The remaining eight games of the season are all crucial as UM looks to grab home-field advantage all the way to the College World Series in Omaha. It’s going to be an exciting race to the finish line as Miami seeks to also clinch the coastal.

JP Gates’ outing was not only brief (faced three batters) but bad giving up the go-ahead homer.