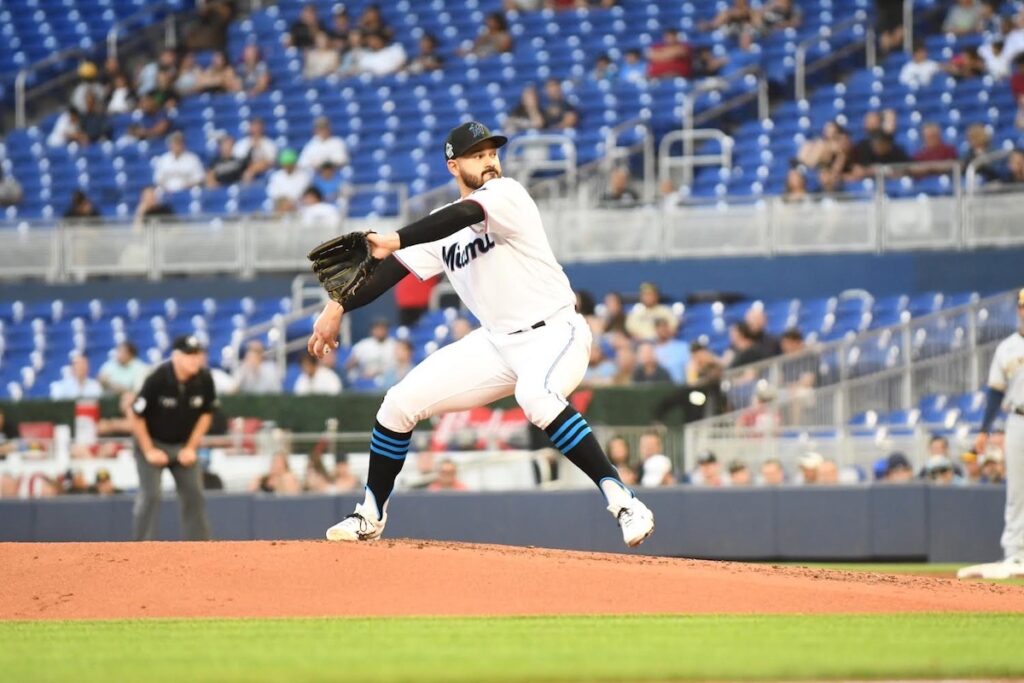 Miami, FL – The Miami Marlins kicked off their 1997 World Series 25th Anniversary weekend series with the roof open for the first time all season. Miami was entering a three-game series against the Milwaukee Brewers and all eyes were on the pitching matchup for tonight’s game.

The game featured last year’s Cy Young award winner, Corbin Burnes for Milwaukee, and Miami answered with Pablo Lopez. Lopez entered the game leading Major League Baseball in ERA at 1.00. The pitching matchup received a lot of attention and it definitely did not disappoint.

Roof open for the first time this season! Great way to kick off the 25th anniversary weekend of the 1997 World Series. First pitch is at 6:40 Pablo Lopez on the mound for the @Marlins Covering tonight’s game for @LemonCityLive #MakeItMiami #LetsGoFish pic.twitter.com/K1KWmM4ESO

Lopez Changed It Up Tonight

Pablo Lopez matched Burnes pitch for pitch and showed why he has been the MLB leader in ERA. However, it didn’t start that way for Lopez. On the second pitch of the game, Kolten Wong launched a solo home run to right field to give the Brewers an early 1-0 lead. From that point on, Lopez was lights out.

In the following six innings, Lopez only gave up two hits and did not walk a single batter. Lopez was slicing through Milwaukee’s lineup and at one point retired 15 Brewers in a row.

His 1.05 ERA is the lowest for a #Marlins pitcher through his first seven starts of a season.

Continues to throw his changeup at a career-high rate to great results. pic.twitter.com/PKy3d3hHIs

The highlight of Lopez’s stellar night came in the top of the seventh inning. In what would be his last inning of work, Lopez struck out Rowdy Tellez for his 10th strikeout of the game. That was a career-high in strikeouts. Lopez would raise the bar one more and strike out Jace Peterson for his 11th strikeout and new career-high. His changeup was dominating batters all outing. Nine out of 11 strikeouts were from his changeup.

As good as the Cy Young Winner was, Pablo López was even better.

He also went 7 and allowed just a run, but set a new career high with 11 strikeouts 🔥

This filthy changeup to get Jace Peterson ended his night 🔴🔵🤮 pic.twitter.com/3MsFlYXKG0

Marlins Were Feeling the Burnes

The Marlins had their hands full today going up against Burnes who held the ERA title last season at 2.43. The Marlins had good swings off of Burnes early in the game. Miami was making strong contact and strung some hits together in the first couple of innings but failed to crack the scoreboard until the third inning.

Jesus Aguilar stepped up to the plate with two outs and no one on base and took Burnes deep with two strikes. Aguilar took advantage of one of the few mistakes made by Burnes. Milwaukee’s ace left a 96 mph cutter over the middle of the plate and Miami’s slugger knew what to do with it.

Unfortunately, runs are hard to come by when you go up against a pitcher of Burnes’ caliber. That was the only run the Marlins could muster up and Burnes matched Lopez with seven strong innings including seven strikeouts. Burnes only gave up one hit the rest of his outing after Aguilar’s solo shot and Milwaukee’s bullpen was stellar as well. Devin Williams earned the win and pitched a 1-2-3 eighth inning to set up their elite closer, Josh Hader.

Steven Okert came in the eighth inning out of the bullpen for Miami and kept the game tied at one run apiece. In the ninth inning, the game started to unravel for the Marlins. Tanner Scott was the next arm out of Miami’s bullpen. The hard-throwing lefty was in immediate trouble. He gave up a single to Christian Yelich to start off the inning. He then hit Luis Urias by a pitch and Tyrone Taylor singled to right field to load the bases with no outs.

Manager Don Mattingly saw enough and went to his closer, Anthony Bender. Bender was able to strike out the next hitter, Hunter Renfroe. With one out and bases still loaded, Bender walked Jace Peterson on four straight pitches. The Brewers scored the go-ahead run to lead 2-1.

Tanner Scott loaded the bases with nobody out, and Anthony Bender got three strikeouts but walked in a run in between.

The Brewers have a 2-1 lead going to the bottom of the 9th 🔵🟡 pic.twitter.com/b8iVaWtGtD

Bender was able to limit the damage in the inning by getting the next two hitters out but Miami was now tasked with tying the game against the league leader in saves, Josh Hader. Hader was a perfect 12 out of 12 in save opportunities so far this season. Milwaukee’s closer made it 13 out of 13 after retiring Jazz Chisholm Jr, Aguilar, and Jorge Soler in order.

Marlins Stuck On the Wrong Side

After losing 2-1 against the Brewers, Miami has been part of 11 one-run losses. That’s the most in baseball and a stat Miami needs to avoid in order to remain competitive. A lot of these one-run losses are coming in the ninth inning due to blown leads. Bender has been shaky at times and any other option Mattingly throws out there doesn’t seem to do any better. In this game, Scott was handed the closing duties and it didn’t lead to better results.

After scoring eight runs in the ninth inning of their last game, Miami’s offense went quiet. It’s not the first time in which the Marlins’ bats can’t back up a starter’s great performance. Miami still has a chance to tie and win the series with two more games left.

Game two will feature two lefties dueling at loanDepot Park. Eric Lauer will go for Milwaukee and Miami will match with their own southpaw in Trevor Rogers. Lauer is going into the game with a perfect 3-0 record and an impressive 1.80 ERA. Let’s see if Miami can hand him his first loss of the season. First pitch is at 6:10.