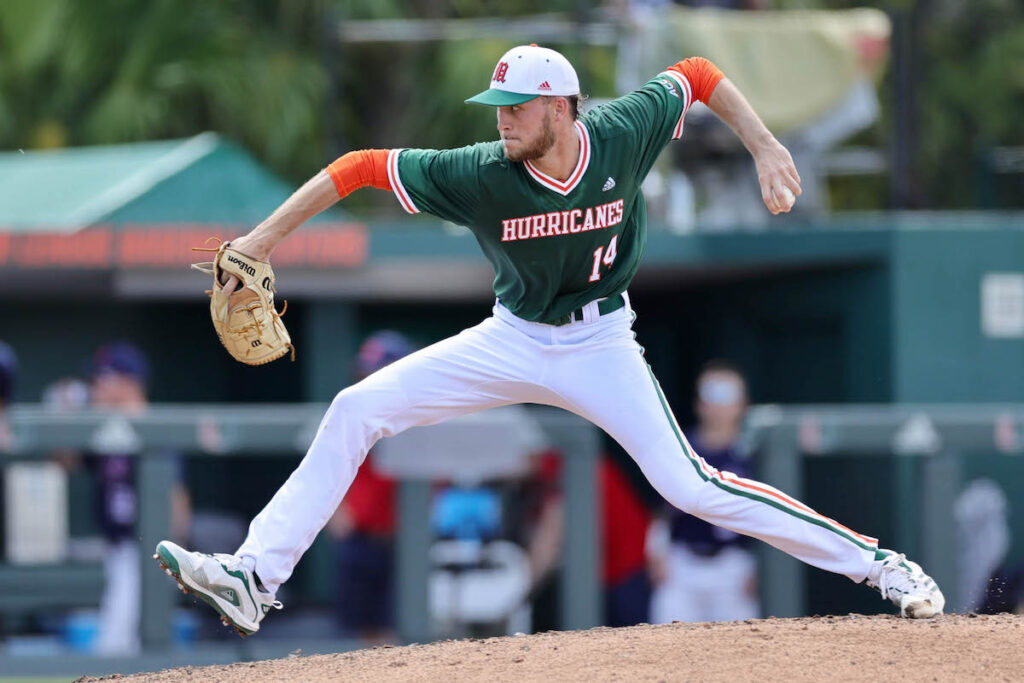 Miami, Florida – The Ole Miss Rebels spoiled a great start by Carson Palmquist winning 2-1 to knock the Miami Hurricanes into the elimination bracket. Palmquist struck out 10 through five and a third shutting out the Rebels for a time. UM’s ace tallied a grand total of 118 strikeouts for the year the most for a Hurricanes pitcher since 2008.

Hunter Elliott, however, matched him blow for blow holding the Canes to a run on three hits in a battle between lefties.

Ole Miss captain Tim Elko’s two-RBI double at the bottom of the seventh proved to be the decisive blow to Miami’s hopes of staying in the win column.

Fans were treated to a pitcher’s duel as both starters traded zeroes on the scoreboard.

The Hurricanes threatened in the first loading the bases but Jacob Burke and Zach Levenson whiffed. Miami had another shot at the top of the fourth after Burke successfully stole second base. Initially called out, the play was overturned giving the freshman his 10th steal of 2022. Elliott fanned the next two hitters before retiring Dorian Gonzalez, Jr.

Miami broke the scoreless deadlock at the top of the sixth.

A single, a walk, and a wild pitch put Palmquist in a precarious situation. However, the southpaw punched out Kevin Graham to end his day on a high note. Alex McFarlane took over in relief striking out Kemp Alderman before getting Peyton Chatagnier to hit into a fielder’s choice at second base leaving them loaded.

Ole Miss rallied the next frame.

With two outs the Rebels strung together three consecutive hits scoring a pair of runs in a huge momentum shift. Elko’s crucial hit reinvigorated the visiting fanbase taking the wind out of the Canes’ sails.
The U tried to create some late-game magic but Gonzalez struck out stranding the tying run at second.

Make no mistake. Miami’s backs are to the wall. They now need to eliminate the Arizona Wildcats in order to play tomorrow against Ole Miss again. Assuming they make it that far, they’ll need to put down the Rebels TWICE.

I’m not going to lie. This is a daunting task. The bullpen’s early use against Canisius factored into today’s game and coach Gino DiMare has fewer options. Alejandro Rosario will be getting the ball tonight against the Wildcats.

It was a great start by Palmquist but unfortunately, it was in vain.

The offense as a whole. They had chances. Not many but enough to give the necessary run support the pitching needed. Shaking my head.