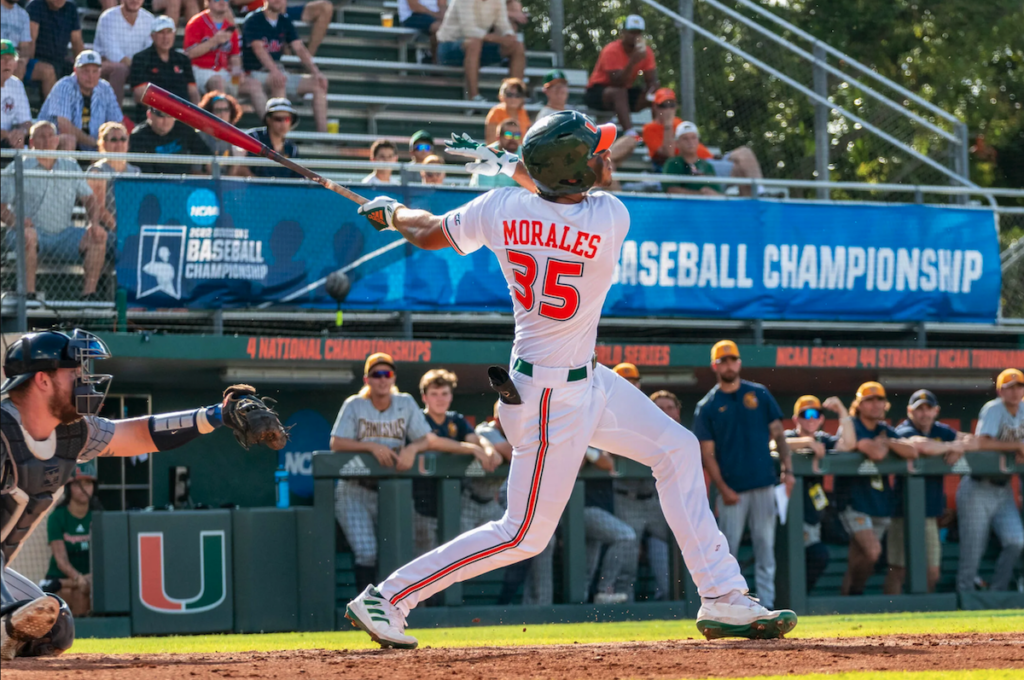 Miami, Florida – Behind an explosive performance by Yohandy “Yoyo” Morales, the Miami Hurricanes overpowered Canisius 11-6 to open the Coral Gables Regional. The third baseman went 4-for-4 crossing the plate four times driving in five. The Golden Griffins jumped to an early 4-1 lead chasing off UM starter Karson Ligon but the Canes seized control from the third inning onwards.

Unexpectedly forced into the game sooner than they hoped, the bullpen really stepped up shutting down the opposing offense. Ronaldo Gallo got out of a bases-loaded jam in the second frame fanning Gibson Krzeminski while Alejandro Torres and Gage Ziehl likewise put up clean outings. The trio punched out seven of the 11 strikeouts recorded from the relief corps. The relievers threw for a combined seven and two-thirds innings. The effort was backed by a terrific defense. Dominic Pitelli robbed Carlin Dick of a base hit in the third with a big dive spearing the liner.

Canisius scored the first runs of the rain-delayed regional notching two in the first. Mike Steffan doubled down the right-field line plating Mike DeStefano. Canisius scratched another run via a fielder’s choice taking a 2-0 lead. Ligon struggled from the get-go surrendering three straight hits as his pitch count climbed to 33.

His troubles continued in the second as Trevor Henneman launched one into space, homering over the left-field fence. The righty walked Max Grant before coach Gino DiMare pulled the plug. Gallo took over on the mound but Steffan struck again with an RBI single to the right side adding their fourth run of the contest.

Although they were already trailing, the Hurricanes responded with a towering solo shot from Morales during his first appearance at the dish. It was a prelude of things to come. Momentum swung dramatically in Miami’s favor with two dingers in the third.

Yoyo took another round trip slamming the ball dead center for the two-run homer. Jacob “Bayou” Burke mimicked Morales also going yard in the same direction tying it 4-4. Yohandy then broke the deadlock in the seventh with his third bomb of the evening giving the Canes the 6-4 lead. They would never relinquish it.

Dorian Gonzalez Jr. continued the attack going into clutch mode hitting up the middle to make it 8-4.

Canisius did not go away, however. The Golden Griffs loaded the bases on Alex McFarlane with DeStefano poking one past Morales at third for the RBI single. Unwilling to allow the reigning MAAC champs a chance to rally, the Canes called upon their shutdown man Andrew Walters. The future MLB draft prospect K’ed Grant while Steffan fouled out to escape unscathed.

Miami added three more insurance runs and Walters held off a late ninth-inning push to acquire the save.

Hats off to Yohandy Morales. This was a HUGE victory for the Hurricanes. Ligon getting knocked out early and the necessity of Walter was one of the few negatives I saw. With their confidence restored, the Canes are now in an excellent position. In winning their first game of the tournament, The U avoids the morning slot of tomorrow’s triple header. You read that right. Miami faces the winner of Arizona and Ole Miss during the afternoon. There is one detail to keep in mind though, should they lose the hosts will be forced to play again less than two hours later.

The way these boys overcame their initial setbacks was the sort of attitude we’ve been looking for especially after getting embarrassed by Wake Forest. Momentum is a precious thing and the opportunity to build on it is now a possibility on their march to Omaha.

Morales without a doubt. Like I told coach DiMare: Tommy who?

Ligon’s start was certainly disappointing. It forced Miami to deploy the bullpen which may factor in for the battles to come.