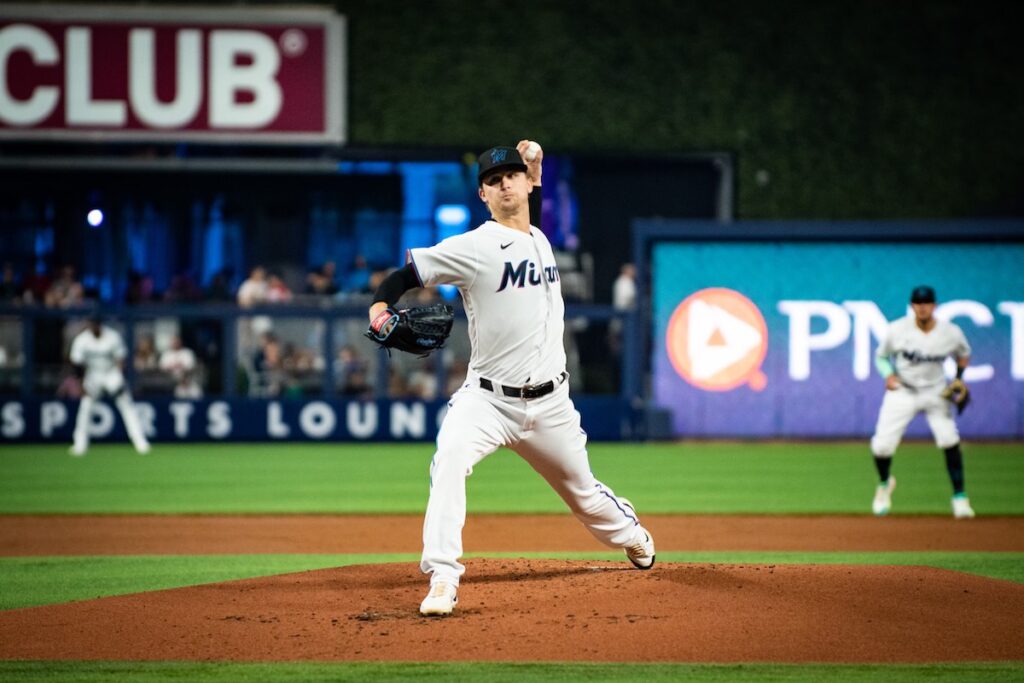 Miami, FL – The Miami Marlins looked to get the series win against the San Francisco Giants Sunday afternoon. Miami won the first two out of three against the Giants and gave the starting nod to Braxton Garrett in the series finale.

Garrett was making his 2022 MLB debut after the Marlins sent down Elieser Hernandez to Triple- A Jacksonville. This game would also decide which team would take the season series since it’s tied 3-3.

10 minutes away from first pitch of the series finale between the @Marlins and the @SFGiants
Braxton Garrett will get the starting nod and it's his 2022 MLB debut! Miami looks to get the series win and take 3 out of 4 against the Giants @LemonCityLive #MakeItMiami @firstpitch305

The last time Garrett pitched off of an MLB mound was 10 months ago on August 16 against the Braves at loanDepot Park. Garrett did not get off to a smooth start in his outing. The Giants did not get solid contact off of him but were able to get his pitch count up. Compared to last season, Garrett’s velocity was a few ticks higher and his breaking pitches were more effective with a lower arm slot this year.

In the first inning, Garrett hit Wilmer Flores with a pitch and Evan Longoria flared a single to shallow right field. San Francisco had runners on first and third with two outs, but Garrett got Luis Gonzalez to line out.

Garrett found himself in another first and third jam the following inning with no outs this time. Thairo Estrada was hit by a pitch to lead off the inning and then stole second base. After striking out Jason Vosler, Curt Casali singled to right field and Garrett had to tight rope out of trouble again. The left-hander struck out Donovan Walton and Austin Slater to end the second inning.

This might sound weird because he has thrown 43 pitches and has allowed four baserunners through two innings, but #Marlins lefty Braxton Garrett has looked really good so far.

A pair of two-strike HBPs
A pair of soft-contact singles
4 strikeouts pic.twitter.com/L8gnEJbvoV

The first two innings were eventful for Garrett after hitting two batters and surrendering two hits. He was able to strand all four baserunners and keep the Giants scoreless. Garrett had to throw 43 pitches in two innings but recorded a 1-2-3 inning in the top of the 3rd.

One Pitch is All it Takes

In the fourth, Garrett was able to get the first batter out but then got into some trouble. Estrada and Volser reached base on back-to-back singles and then successfully pulled off a double steal. Garrett walked Casali and the bases were loaded for Walton.

Before his at-bat, Miami’s pitching coach, Mel Stottlemyre, stepped out for a mound visit to settle down the 24-year-old. After the visit, Walton did not waste any time swinging away. On the first pitch of the at-bat, he launched a hanging slider to right field for his first career grand slam. With one swing of the bat, the Giants had a 4-0 lead and that would ultimately be the difference in the game. Walton seemed to enjoy hitting in loanDepot Park and finished with seven RBIs for the series.

Cooper or Nothing at All

Miami’s offense went quiet in the last game of the series. San Francisco’s starter, Jakob Junis, played a significant factor in that outcome. The Marlins only had one hit in the first five innings of the game which was a single by Miguel Rojas.

The lone Miami run came in the bottom of the sixth thanks to Garrett Cooper. He went 2-4 in today’s game and one of those hits was a solo home run off of Junis. That was his fourth of the season and it was impressive to see Cooper going opposite field on a tough pitch.

The Marlins are on the board after a long oppo taco from Garrett Cooper! 🌮⚫️🔵 pic.twitter.com/EanFCDMbhh

He’s been the Marlins’ best and most consistent hitter all season and has been on a tear recently. After going 2-4 today, he is hitting .451 in his last 14 games. That was the only blemish in Junis’ outing as he completed the sixth inning and earned the win. He struck out eight Marlins along the way and threw 96 pitches.

San Francisco’s bullpen held Miami scoreless for the last three innings of the game and only gave up three hits. The Giants added an insurance run in the eighth after Casali scored on a single by Austin Slater to give them a 5-1 lead. Miami will have to settle for a series split but there was an improvement from their performance in May.

That's the ballgame folks. The #Marlins drop the series finale against the #Giants 5-1. Miami does split the series against a team that won 107 games last year. Off day tomorrow and then Miami will host the Nationals on Tuesday for a 3 game series. @LemonCityLive #MakeItMiami

Miami has an off day tomorrow and will face the Washington Nationals for a three-game series. The Nationals sit at the bottom of the National League East and Miami is 5-1 against them this season. The Marlins have a chance to finish this seven-game home stand with a winning record if they take care of business against a struggling team. The first pitch is scheduled for 6:40 pm.