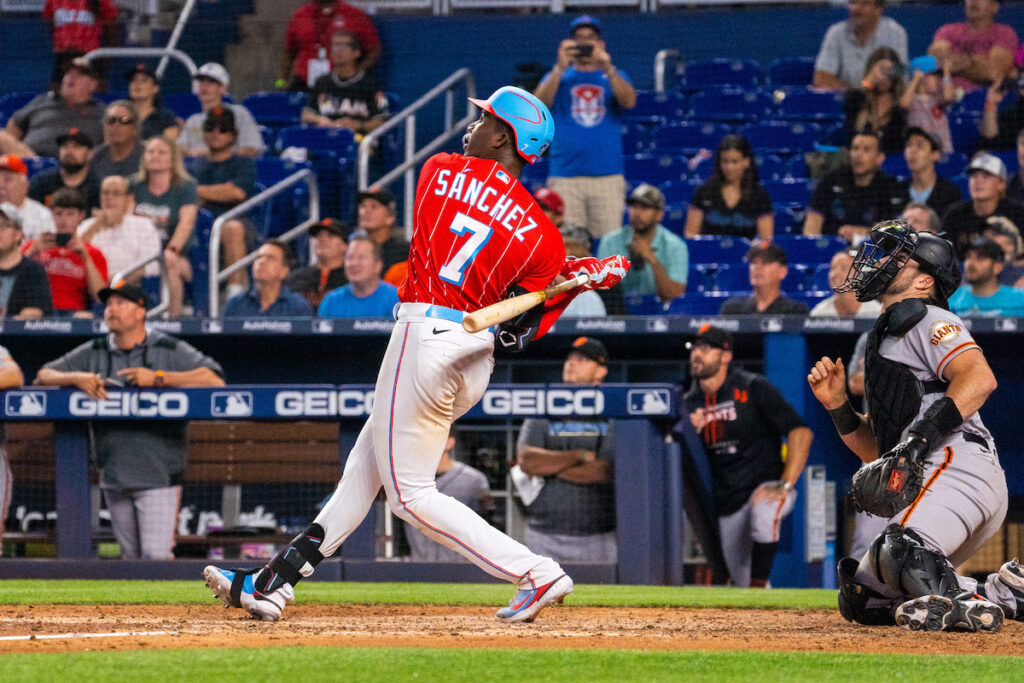 Miami, FL – The Miami Marlins looked to rebound from a disappointing 15-6 loss last night. Miami was entering game three of their four-game series against the San Francisco Giants after splitting the first two games. Pablo Lopez was starting for the Fish today and he was going up against the Giants’ ace, Logan Webb. Lopez was entering the game with the third-best earned run average in all of Major League Baseball at 1.83.

Minutes away from first pitch of Game 3 between the @Marlins and the @SFGiants
Pablo Lopez will be on the mound for the Fish as they look to get the series lead. Another Legacy Saturday at loanDepot Park! @LemonCityLive #MakeItMiami @firstpitch305 pic.twitter.com/AgpaGDDIyD

Pablo Has the Guts

Both starters began the game exchanging zeroes in the first two innings. With a scoreless tie in the top of the third, Jason Vosler homered to lead off the inning and gave the Giants an early 1-0 lead.

The Giants were able to get to Lopez again in the fourth inning. After getting the first out in the inning, Pablo surrendered a ground-rule double to Joc Pederson. Lopez then walked Brandon Crawford and Thairo Estrada on back-to-back plate appearances to load the bases.

With still one out in the inning, Donovan Walton stepped up to bat with a chance to extend the Giants lead. Walton was able to clear the bases with one swing of the bat. The Giants’ second baseman ripped a double down the left-field line and all three runners scored. San Francisco had a 4-0 lead headed to the middle innings. It seemed like the Giants had Pablo on the ropes and his start was nearing an end. Lopez had a different plan in mind and was able to retire the next two batters after the double and end the Giants rally.

Pablo Lopez wasn’t as sharp as he normally is, but still gutted out seven innings and set a new career high in pitches. (110) After the game Lopez talked about how he adjusted after a tough 4th inning. @LemonCityLive #Marlins #MakeitMiami pic.twitter.com/Z2Ynh3vnSg

It seemed like Lopez was improving as the game progressed. From the fifth to the seventh inning, Lopez retired the Giants in order and he finished his outing retiring the last 11 consecutive batters he faced. After Pablo finished the sixth inning, his pitch count was getting close to 100. The most pitches he has thrown in a game this season is 100 and the most in his career was 108. Lopez returned for the seventh and finished with 110 pitches and saved Miami’s bullpen since they have been used a lot in the past week.

Pablo definitely has the guts!

Caught In a Webb

Miami’s offense came out of the gate slower compared to the Giants’. Logan Webb was dominating against Miami and gave up his first hit in the fourth inning when Garrett Cooper singled. Jesus Aguilar grounded into a double play ending the hopes of a rally that inning.

The Marlins were finally able to get to Webb in the following inning. Avisail Garcia started the bottom of the fifth with an opposite-field single. Jesus Sanchez followed that base hit with a double off the wall in left-center field and Garcia scored Miami’s first run. Jon Berti kept the line moving with a single to right field and Miami had runners on first and third with no outs. Berti stole second base successfully to avoid the double play and Sanchez made a heads-up base running move.

Start up the bus!

The Marlins are on the board after a double Jesús Sánchez and have some life in the 5th 🔴🔵 pic.twitter.com/PXqJU9ypdY

The throw to second from Joey Bart was misplayed by Walton and the ball trickled away from him. Sanchez noticed the error and scored from third to cut San Francisco’s deficit in half 4-2. Webb struck out Miguel Rojas and got Jacob Stallings to ground out. Berti advanced to third and the top of the lineup was due up with two outs. Jazz Chisholm Jr. drew a walk and Gabe Kapler saw enough from his starter as Cooper was next in the order.

John Brebbia was the first reliever out of the Giants bullpen and Jazz stole second base while Cooper was at the plate. Cooper worked a full count against Brebbia and fouled off tough pitches before he lined a ball to right field for his second hit of the night. Berti and Jazz scored and it was a tie ball game again.

The Marlins have stormed all the way back to tie it! 🔴🔵

Garrett Cooper drives in a pair to tie the game 4-4, and check out the wheels on Jazz as he just gets in under the tag 🔥 pic.twitter.com/Sn1KMH8Dze

The Giants bullpen kept the game tied 4-4 after Miami’s fifth-inning rally. After Lopez’s seven innings, Steven Okert and Tanner Scott pitched a scoreless eighth and ninth inning. Tyler Rogers came in for the Giants and pitched a clean eighth inning. He returned for the bottom of the ninth to try to get the game into extra innings.

Aguilar led off the inning with an infield single and Garcia was hit by a pitch. Luke Williams came in the game to pinch run for Aguilar. With no outs and runners on first and second, Rogers balked. Williams and Garcia advanced into scoring position and then it was Sanchez’s turn to be the hero. The Giants brought in an outfielder to have a fifth infielder on the diamond and Sanchez was still able to lift a pitch into the outfield off of the submarine pitcher. The fly ball was hit to center field and was deep enough for Williams to score easily.

The Marlins walked off for the first time this season and have taken a 2-1 series lead over the Giants. Miami looks to get the series win tomorrow and they still haven’t announced their starter for the finale. All signs are pointing to Braxton Garrett even though there hasn’t been an official roster move yet. Garrett was at loanDepot Park after Elieser Hernandez was optioned to Triple- A Jacksonville before the game. Garrett has performed well in Jacksonville this season and has a chance to keep a spot in the starting rotation at the big league level. First pitch is at 1:40pm.

WALKOFF WIN!! Miami gets their first walkoff win of the season after Jesus Sanchez flies out to centerfield but Williams tags up from third and scores. Final Score: #Marlins 5 #Giants 4. Miami takes the series lead. @LemonCityLive #MakeItMiami